La Vie, a plant-based food startup in France, is on a mission to start a vegan bacon revolution and has tested products that taste almost like the real thing. Pork lobbyists are not too happy about it.

In a hot pan, the streaky bacon made by La Vie starts curling within minutes, bubbling and crisping just like bacon.

It’s not easy being vegan in France. Especially when you’ve been raised a meat lover.

“In France, you don’t have too many vegans,” said Nicolas Schweizer, 35, who’s been vegan for about a year now.

“There’s so much social pressure to just stick with meat on every single meal.”

Schweizer is also the co-founder of La Vie, a plant-based food startup on a mission to start a vegan bacon revolution of sorts not just in France, but all over Europe. And some pork lobbyists are not too happy about it.

“We are convinced that animal fat is a big part of what makes animal meat so delicious,” Schweizer said. 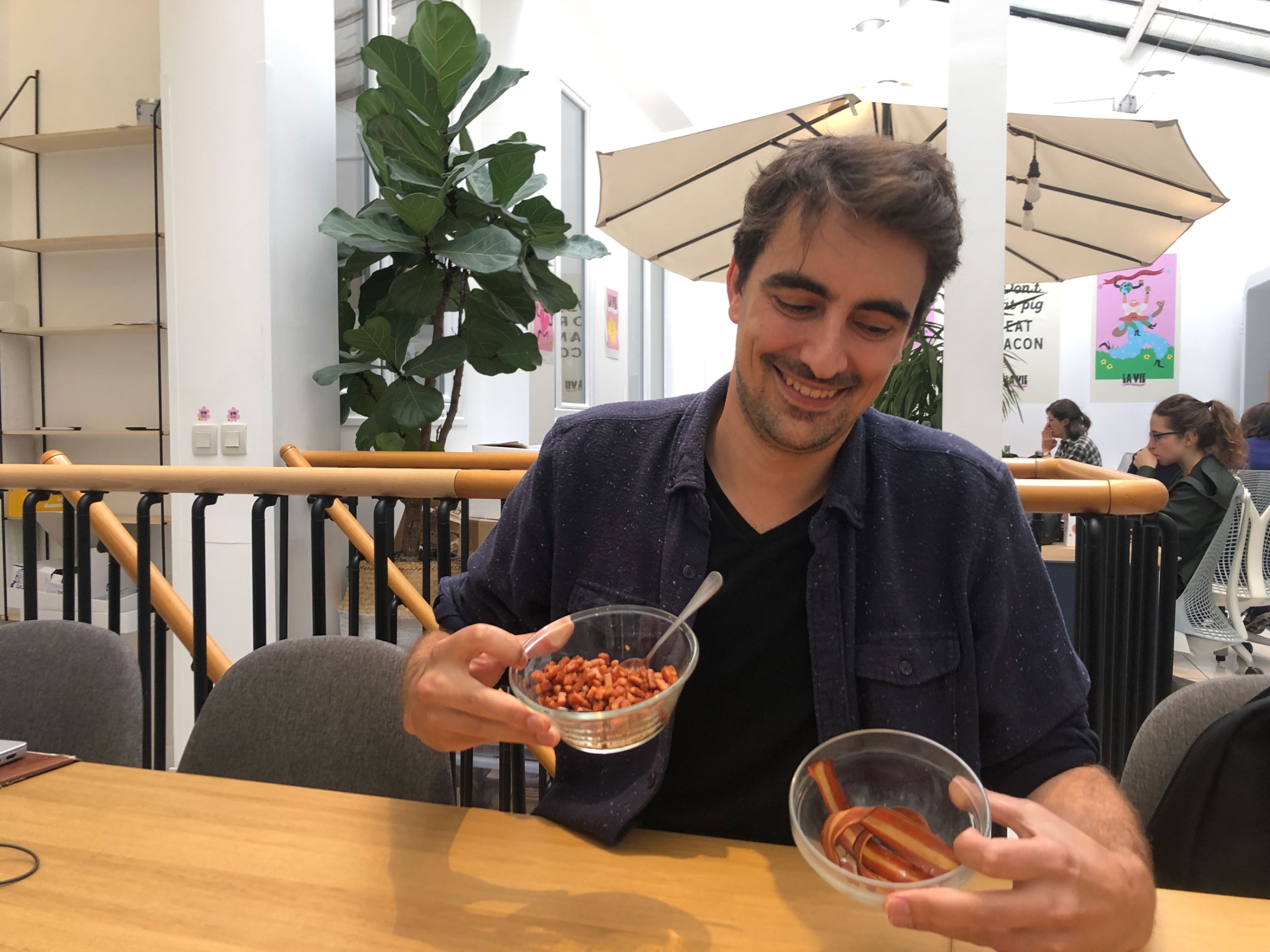 Nicolas Schweizer, 35, has been vegan for about a year now and founded La Vie, a plant-based startup hoping to revolutionize vegan meat.

He and his team have spent years trying to mimic that fatty layer using plant based proteins. But it’s almost impossible, he explained, because plant-based fats are usually oils that melt when heated.

Years of testing in the lab seems to have paid off.

In a sizzling hot pan, the streaky bacon starts curling within minutes, bubbling and crisping — just like bacon.

And sure enough, the bacon is salty, fatty and crispy — successfully mimicking the texture that’s so difficult to re-create.

In a third-party survey La Vie ran, 250 meat eaters were invited to compare their vegan beacon to pork bacon, and 75% said they found the taste was “equivalent or superior [to pork bacon],” Schweizer said.

And 60% said they would be willing to swap pork bacon for La Vie bacon on a regular basis, he added.

But this feat has gotten La Vie into trouble with France’s pork lobby, known as INAPORC.

Earlier this year, INAPORC served La Vie with a formal notice for unfair competition for its veggie lardons which, they said, risked “deceiving customers” into thinking they were buying pork lardons.

The pork lobby also said La Vie’s advertising violated the terms of a forthcoming law which bans plant-based food manufacturers from using words traditionally associated with meat products on their labels such as “sausage” “steak” and “bacon.” 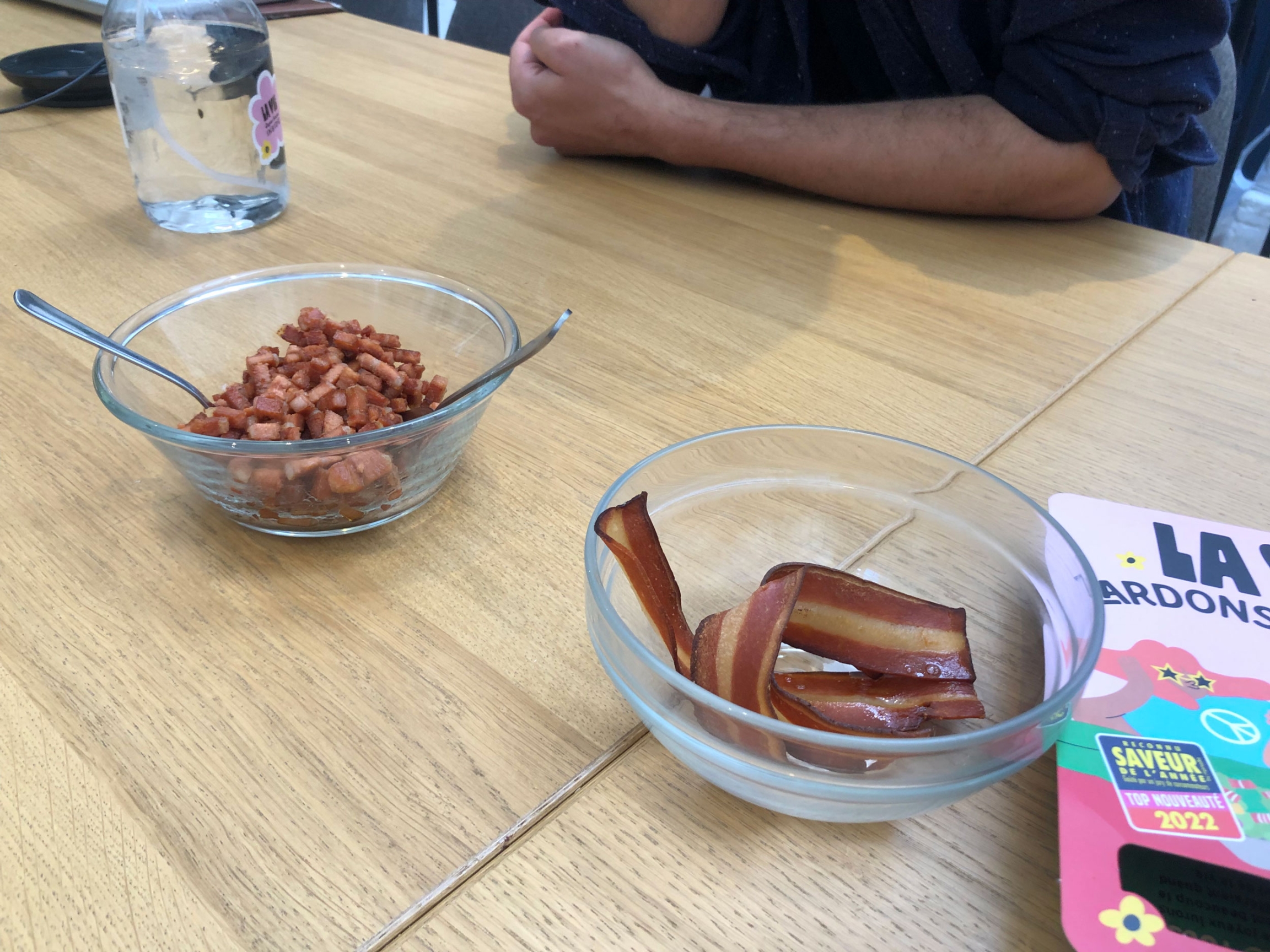 In response, La Vie took out a full-page ad in the newspaper Le Parisien thanking INAPORC for the compliment and asking the pork lobby to consider changing its recipes.

The ad also featured a postcard cutout addressed to INAPORC, inviting La Vie fans to send it to the pork lobby.

Over the summer, the Supreme Court agreed to put the label law, set to take effect this October, on hold.

La Vie hopes the law will at least be modified.

INAPORC declined to comment, saying it didn’t want to speak publicly about an ongoing case.

The pork butchers at the former Les Halles market near Rue Montorgueil in central Paris aren’t as tight-lipped.

“This all gets a little bit too far-fetched and it's just trying to create an even bigger gap between those who do eat meat and those who don't eat meat,” she said.

But she also said she’s not a fan of plant-based meat alternatives.

“You can do so many other things with vegetables and get the same results without having to recreate false burgers and sausages and stuff like that.”

But Schweizer said the issue is that many vegans — like him — love the taste of meat.

“To have an option to retrieve all the pleasure that you get from meat — from a taste perspective — without all those negative impacts is amazing,” he said. 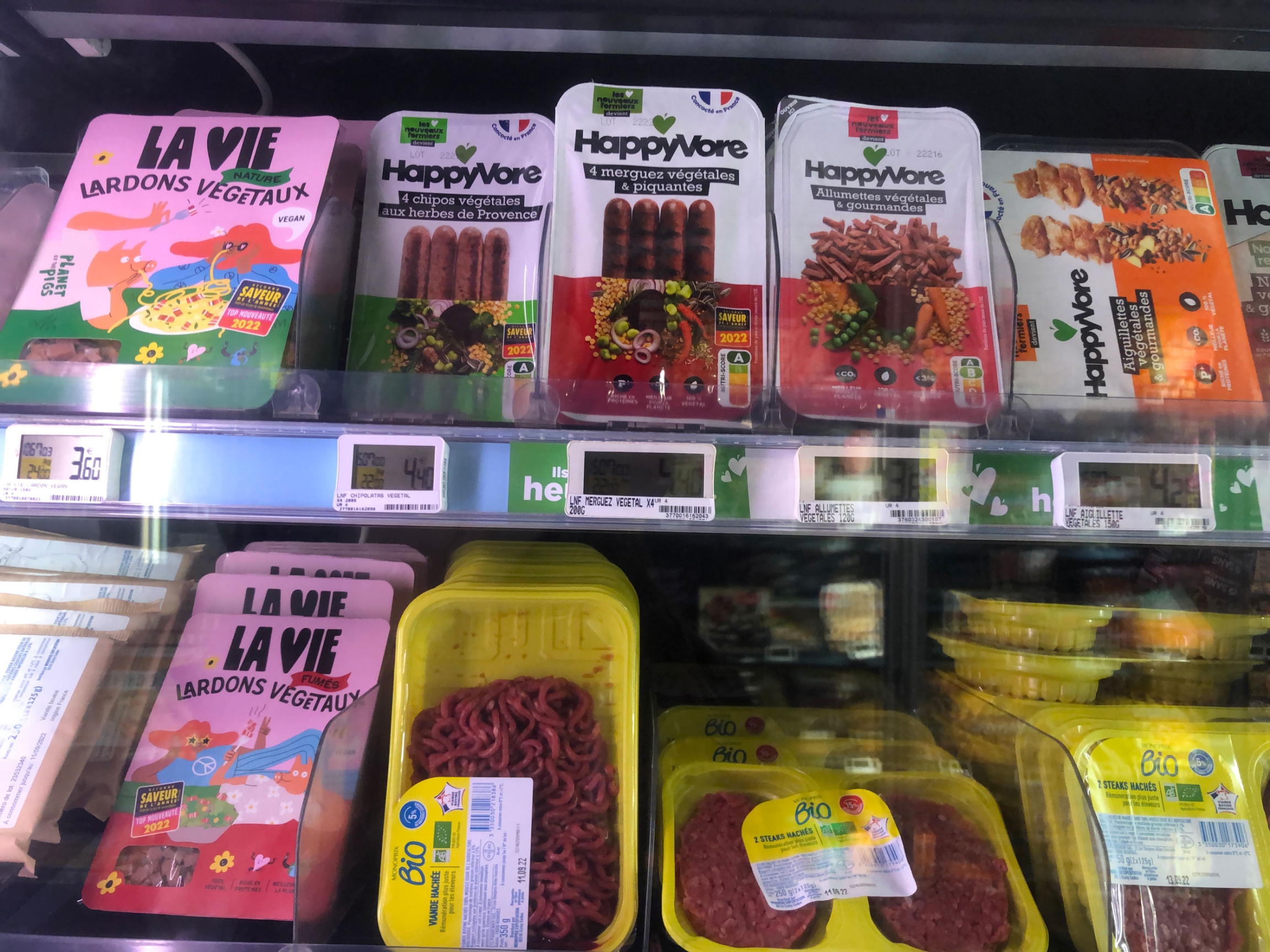 Indeed, animal farming is responsible for 18% of all greenhouse gas emissions today.

He hopes that eventually the meat industry will be phased out entirely.

Along with coal and other industries that are damaging for the environment, he said it’s time for our society to transition to something that’s more sustainable.

« Politcal theater: Part I (Previous Post)
(Next Post) The work of the Morgenstern restaurant in Moscow was suspended »