The five-day Durga Puja festival brings the city of Kolkata, India, to a standstill as throngs of people visit elaborate temples to the Goddess Durga that spring up everywhere.

Kolkata's artists had to burn the midnight oil to get their Durga pujas ready early for the special art preview for visiting dignitaries.

The sounds of drums at this time of the year in Kolkata mean only one thing — it’s time for Durga Puja, the festival of the Hindu Goddess Durga as she comes home to Earth with her family.

The five-day festival brings the city to a standstill as throngs of people visit the temporary temples to the goddess that spring up.

This year, the main festival kicks off on Oct. 2, but the drums have been beating a few days earlier than usual to welcome UNESCO officials and international guests. Durga Puja was recently added to UNESCO’s list of intangible cultural heritage. This will be the first Durga Puja with that UN recognition. 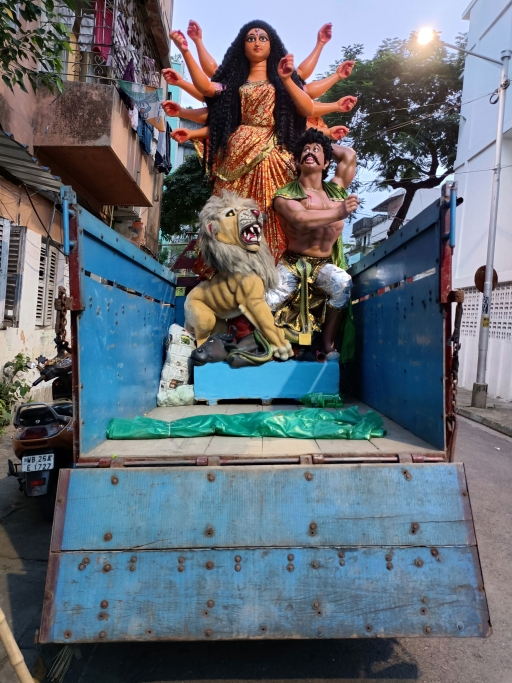 The goddess Durga riding on a truck en route to worship.

Dol Das, with a big drum slung across his shoulder, said the government summoned him to Kolkatta from his village to play drums a few days earlier than usual, but he's not complaining. The extra festivities during Durga Puja means extra money.

"At the end of the day, this is completely art, art and art," said Dhrubojyoti Bose Suvo, the secretary at MASS ART. He’s organized a preview festival of some selected pujas so foreign guests can get a sense of how Kolkata “transforms to a public gallery.” Up to 3,000 temporary temples called pandals spring up on the streets and in parks, community centers and apartment complexes, to house clay images of the goddess. Some are just cookie-cutter boxes made of cloth and bamboo. Others are elaborate installations.

Durga Puja was once all about the goddess herself, with her 10 arms riding a lion and killing the buffalo demon. But past Durga pujas have reproduced a Thai temple, Dubai's Burj Khalifa and the Hogwarts castle.

Theme pujas have become all the rage.

One ordinary street in a residential south Kolkata neighborhood has a pandal that pays tribute to Vincent Van Gogh. Sunflowers nod overhead while waves of speckled blue paper billow above, all made of paper and cloth.

“We’ve pulled his starry night out of the frame and spread it across the whole neighborhood,” said Ram Kumar Dey, one of the organizers of this year’s Durga Puja.

Some of India’s most well-known artists have designed the Durga image in earlier years, but he said now Durga Puja has gone international and his neighborhood club, which is organizing this year's Durga Puja, felt they needed an “A-list international name” like Van Gogh. Their theme is “Starry Night.” 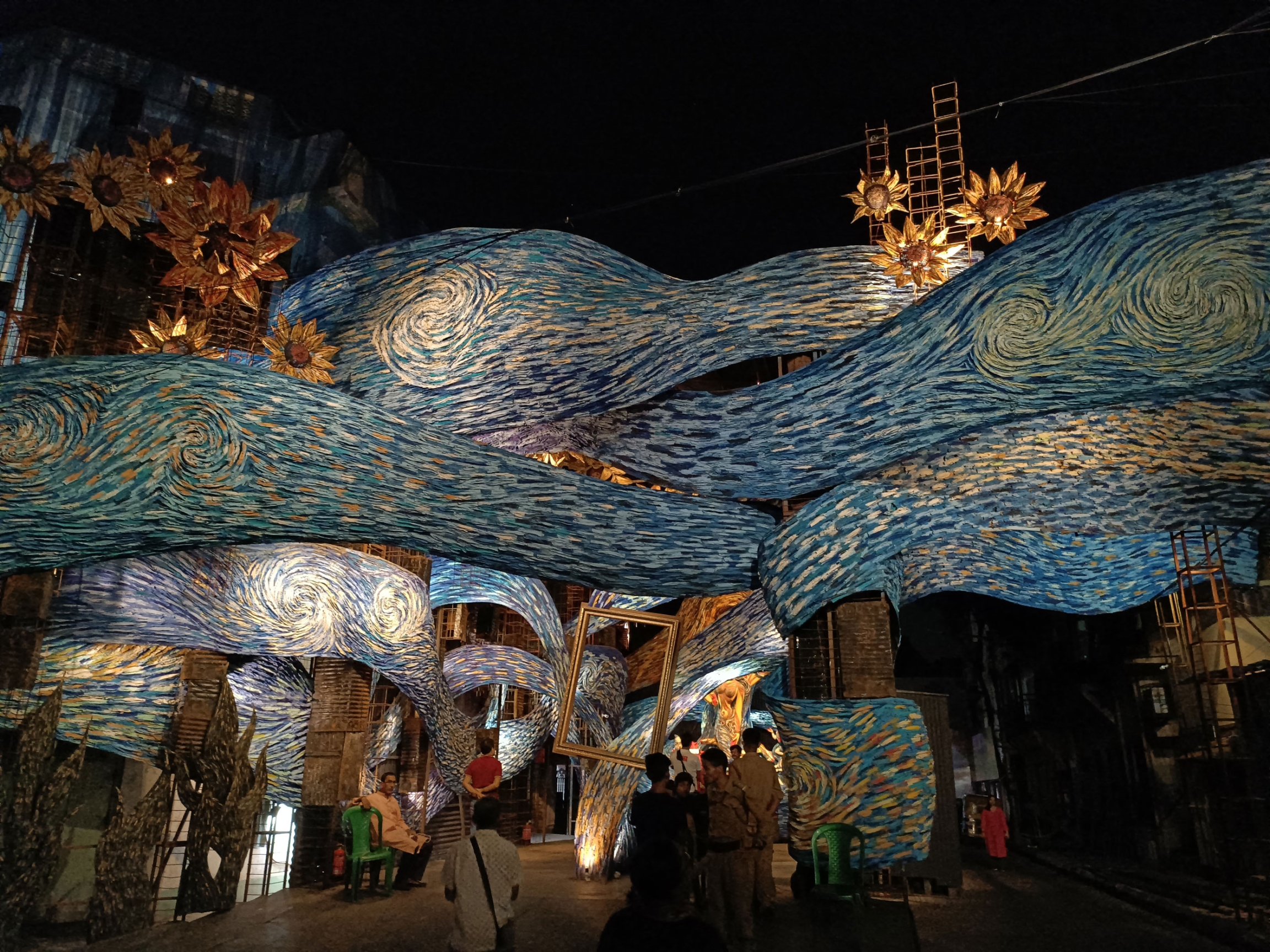 This year's pujas also pay tribute to India’s freedom struggle, the war on plastic pollution and a folk art museum. 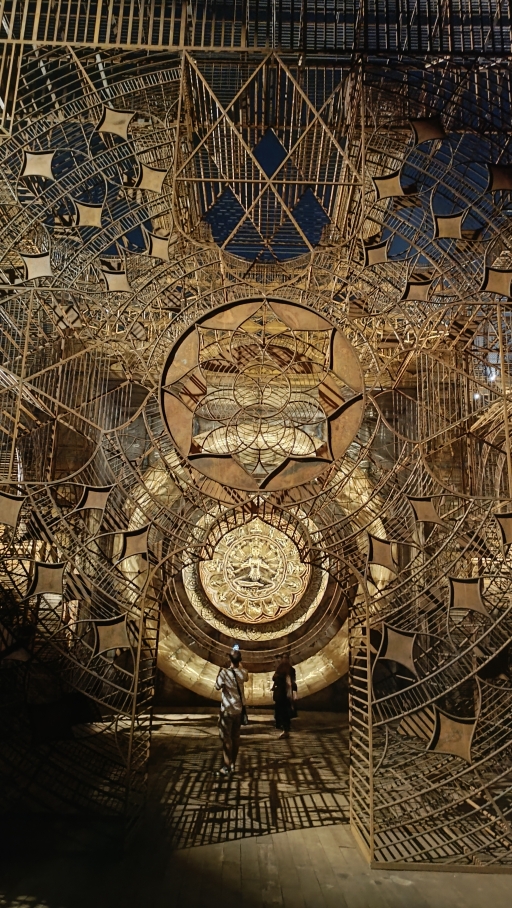 One Durga Puja installation by the Vivekananda Park Athletic Club plays with the theme of perspetives, using iron pipes and sheets spread over 6,000 square feet to create the illusion of an old mansion on its side. The effort required the labor of 44,100 total hours.

Niladri Chatterjee, an academic who has documented pujas for years, said that over time, he has seen Durga pujas making social commentary on hot-button issues like literacy, wife-beating and domestic violence.

“At first I was disturbed,” he said. “I thought, ‘What is this nonsense?’”

But he realized this was a new kind of social messaging via popular art, reaching huge crowds.

During the pandemic lockdown, a Durga Puja reimagined the goddess and her family as a migrant mother and her children struggling to get home. It became the talk of the town.

As Durga Pujas got more creative, Chatterjee said it was an “enormous boon” for young artists who had graduated from art colleges and were looking for “any kind of lucrative work.”

The festival is now a major driver of the state’s economy, according to Debanjan Chakrabarti, the director of British Council East and NorthEast India, which commissioned a report on it. The report found the total economic worth of Durga Puja in 2019 was a little over $4.5 billion, despite 2019 being a down economic year.

“That’s just about a shade under 3% of the state’s GDP [gross domestic product] from a 10-day festival,” Chakrabarti said.

That money reaches deep into the unorganized sector of the economy, going to carpenters, electricians, clay workers, food vendors, painters.

Many get over half their annual income from this one festival.

Now, the Durga Puja festival is being rebranded as a citywide pop-up art installation to attract new audiences. But it’s not a biennale with a single curator.

Currently, most of the art work ends up as scrap after the festival, while a handful make their way to collectors. Preview organizer Suvo said he wants to create an online auction so that art lovers around the world can purchase Durga Puja artifacts.

And Suvo is already planning next year’s preview. 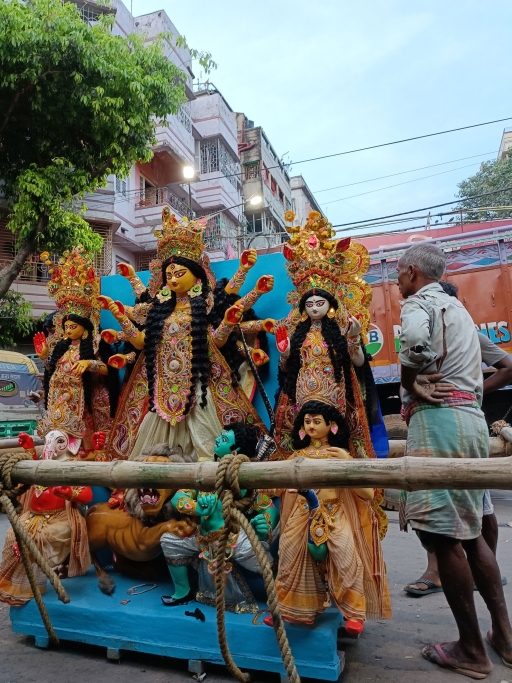 A stylized Durga image at an installation in Kolkata.

But the artistic reinvention of Durga Puja has led some to wonder how well art and religion can mix.

The Durga Puja preview is a way for foreign dignitaries and art lovers to get a taste of the festival’s artwork before the actual religious rituals begin and mammoth crowds choke the streets.

But she added that despite its reputation for excess and revelry, “the purely liturgical element is still retained.” Even if a theme puja comes with a cutting edge fiber-glass Durga, there is still a small clay Durga or pot that gets worshiped over five days and eventually immersed in the river.

Some politicians are raising eyebrows at one of this year’s big theme pujas — a reproduction of the Vatican, but housing a Hindu goddess.

“The history of art is really rooted in humanity’s sense of wonder and trying to make sense of a very chaotic world,” Chakrabarti said.

That is just as true about faith as it is about art.