As Ukraine’s military retakes parts of the country, some people begin to rebuild

Ukraine’s military has retaken hundreds of square miles of territory from Russian forces in recent days. That means Ukrainian civilians might start thinking about returning home. But rebuilding the country is going to be a massive and costly effort.

A destroyed home in the village of Moshchun, Ukraine.

Lyubov Marinoshenko said that four days into the war in Ukraine, a Ukrainian soldier warned that she and her husband had 10 to 12 minutes to flee Moshchun — about 20 miles north of Kyiv — as Russian troops quickly advanced.

Marinoshenko said that they ran, jumped into their car and sped away.

“There were bullets flying from all directions,” she said, adding, “I just put my head down and drove.” 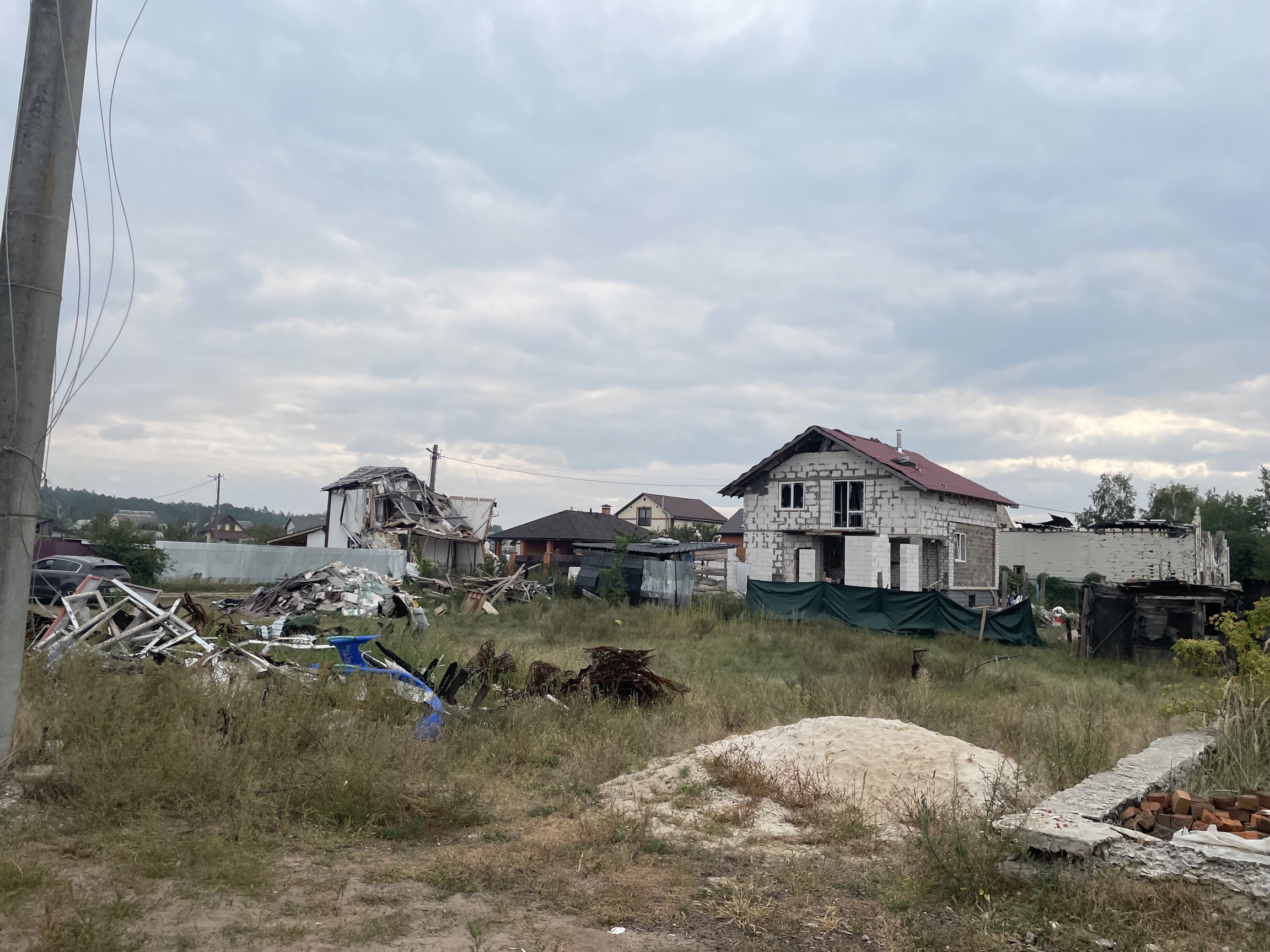 In Moshchun, Ukraine, almost 90% of the buildings here were destroyed in the fighting, according to volunteers helping to rebuild there.

Eventually, Moshchun was taken by Russian forces. The village was then recaptured by Ukraine on March 21.

Ukraine’s military has retaken hundreds of square miles of territory, mostly in the Kharkiv region, from Russian forces in recent days. Now, some Ukrainians are trying to rebuild what has been destroyed by war.

But rebuilding the country is going to be a massive and costly effort. The World Bank has put out an estimate saying reconstruction would cost nearly $350 billion.

In Moshchun, almost 90% of the buildings here were destroyed in the fighting.

When Marinoshenko and her husband went back to Moshchun, they found that most of their house had burned down — they lost everything. 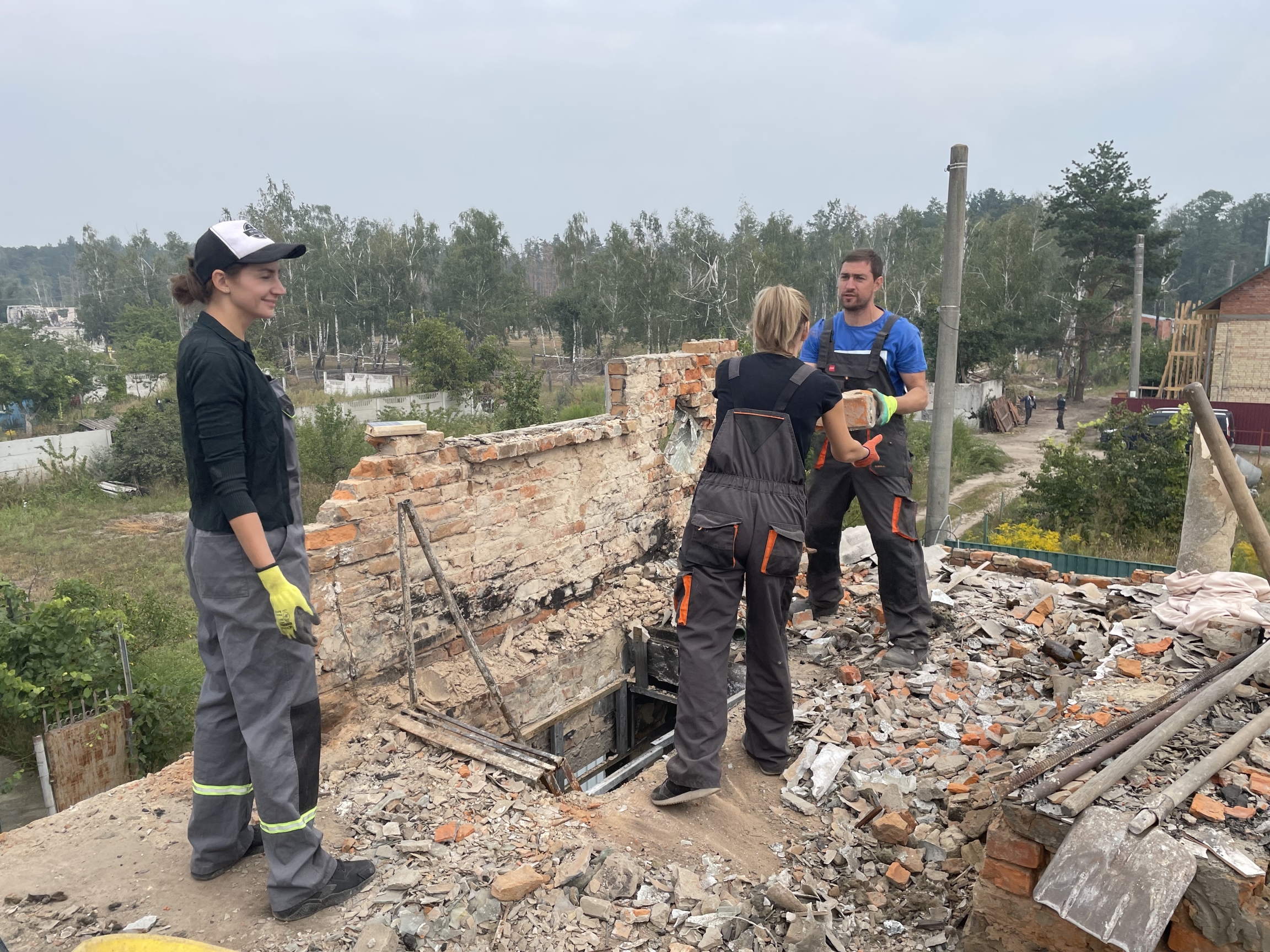 Volunteers with Helping Hand help clear debris from a home in Moshchun, Ukraine.

So did Nikolay Karpenchuk, whose house was also damaged in the fighting. For now, Karpenchuk, who also fled and returned home, is living at his sister’s house while he tries to figure out what to do about what’s left of his home.

Karpenchuk said that he’s not sure if the remaining walls are sturdy enough to build on. Outside, his vegetable garden is flourishing, though. It’s a green oasis surrounded by rubble, he said.

Mykola Kott is with a group of volunteers with a Kyiv-based organization called Helping Hand.

Some are so damaged that they need to be demolished first. Then, they clear the debris, he explained. 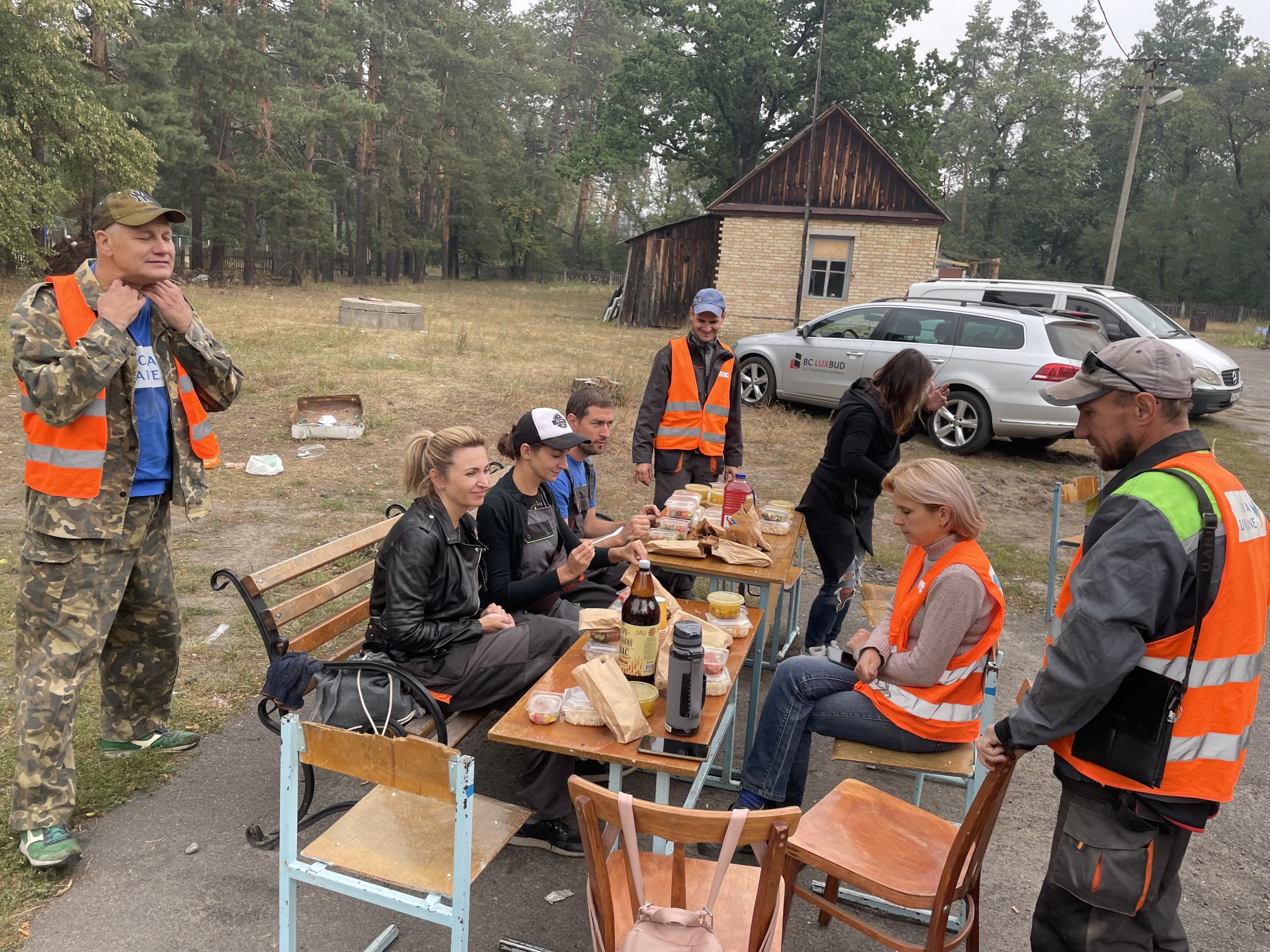 Volunteers with Helping Hand taking a lunch break. They're sitting outside a destroyed school in Moshchun, Ukraine.

Kott said that he’s been coming here since April almost every day. It’s a 2 1/2-hour commute, he said.

“If I can’t help on the front line, this is where I can help,” Kott said.

“We’re like the ambulance,” she said. “We drive out here, we clear debris, we fix roofs, we do whatever we can.”

Krivosheya said that the first month here was the hardest. Hearing people’s stories really affected her. But she says she’s getting stronger. And as long as people here need help, she’ll keep coming back.