Seven-year-old Pau Barrios and his mother, Berta Barrios, celebrate their first successful bicibus route. Two others reach this same school, in Barcelona, Spain, with some 30 to 40 kids participating on any given day.

On a recent morning just outside of Barcelona, Spain, six kids and their parents, all clad in bright yellow traffic vests, gathered on their bikes in a small square.

For the first leg of their trip to school, about a 45-minute commute, they’re taking a rural road — a long, winding descent with fast-moving cars.

This is the group’s maiden voyage. But all across Spain's Barcelona province, children are getting to school in convoys of bikes dubbed the “bicibus,” or  bicycle-bus, organized, often by schools, as an answer to the push for fewer cars on the road.

More than 700 people joined the different routes during the 2020-21 school year, organizers estimate.

As with traditional bus lines, each bicibus route has stops where other cycling students can join along the way. Parents, teachers and other volunteer adults ride, too, to ensure the kids’ safety.

In the year and a half since the grassroots bici-busing began with the backing of the Barcelona City Council, these two-wheeled convoys have appeared all over the city. There are now at least 15 routes and similar bicibuses have popped up in Glasgow, Scotland, and Portland, in the US, according to Reuters.

“I’m doing this because I don’t want to pollute,” said 7-year-old Pau Barrios.

His mom, Berta Barrios, one of the chaperones, said the environmental benefits are only part of the draw of the bicibus.

“We’re here for a lot of reasons,” Berta Barrios said. “First, for safety. Second, for the sense of community it offers. We’re getting together with other families from the neighborhood.”

Before the group set off, a police escort arrived to block the traffic. He wanted the bicyclists all closer together — if they get too spread out, they’re just a bunch of people on bikes. Together, they’re a single unit. More like a bus, and cars respect buses more than bikes.

On this four-lane artery, there are cars and buses aplenty. Volunteer Berta Palau said that sometimes, their police escort is a no-show. When that happens, harried commuters honk at the riders. Let them, she said.

“This is a protest,” she said. “Even if the impact is small. At least we’re no longer a shock to people on the road.” 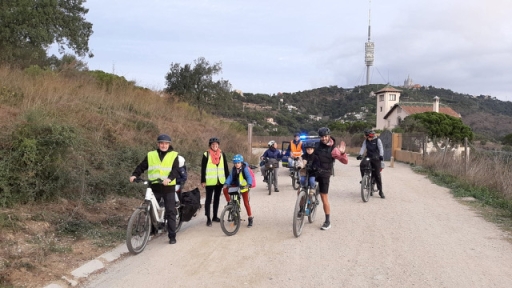 The Vallvidrera “mountain” bicibus stops for a group selfie on a dirt road high above Barcelona. They were halfway to school on their inaugural run.

She said the bicibuses had become part of the urban landscape. Bike lanes, though, are still lacking, she said. But Barcelona is working on it. It now has over 120 miles’ worth. It’s not Berlin, or Copenhagen, but it’s adding more each year.

Eventually, the bicibus enthusiasts say, they’re hoping to get dedicated lanes for the groups, so they won’t need police protection.

To keep up the momentum, the chaperones focus on the fun of the bicibus.

Like Berta Vazquez, a mom, who strapped a big speaker to her bike with bungee cords and blasted “Sympathy for the Devil,” by the Rolling Stones.

“We play music to create a festive atmosphere,” Vazquez said. “We’re free compared to the people crammed together in those cars and buses.”

« Residents of informal settlements among the most at risk from climate change  (Previous Post)
(Next Post) Who are Brazil’s private security guards who outnumber the police? »