Barcelona’s supercomputer MareNostrum is one of the world’s fastest. It’s about to get a massive upgrade.

“MuiTypography-root-134 MuiTypography-h1-139″>Barcelona’s supercomputer MareNostrum is one of the world's fastest. It's about to get a massive upgrade.

In a few months, the MareNostrum 4 will be replaced by the 5. It will be able to compute in one hour what the 4 needed an entire year to complete.

Barcelona’s MareNostrum 4 supercomputer is one of the fastest in the world. But version 5, is coming and it’ll be 30 times faster. The new machines can crunch numbers in seconds, numbers that would take the human mind thousands of years to handle.

Back in the day, computers took up entire rooms, using punch-card technology to do basic math.

Today, your typical smartphone would run circles around those dinosaurs. But room-sized computers have not gone away — they have just increased their computing power exponentially. And various countries now host what are simply referred to as supercomputers.

But it can be difficult to wrap our heads around just how fast these things are and what exactly they can do.

Barcelona’s supercomputer is called MareNostrum —which means “our sea” in Latin, what the Romans used to call the Mediterranean Sea — and it’s about to get a massive upgrade.

In the dimly lit supercomputer’s refrigerated glass chamber, the machine noises do kind of sound like the sea.

The chamber is about the size of a basketball court. And there are rows upon rows of processors stacked on black shelves, their green lights blinking. More than 4,000 cables connect them together, forming a kind of hive mind.

“If you have a thousand chips working on the same problem, they’ll solve it a thousand times faster.”

“This allows them to exchange information very quickly,” said Mateo Valero, the director of the Barcelona Supercomputing Center. “The strength is in their unity. If you have a thousand chips working on the same problem, they’ll solve it a thousand times faster.”

But really, how fast is fast?

Valero gave a real-world analogy, starting with a joke: “As we say in Spanish, ‘What we have here are all the ingredients to make a great paella.’”

He said that in a few months, the MareNostrum 4 will be replaced by the 5 — a single-digit leap in name only.

“What I mean is, the MareNostrum 5 will be able to compute in one hour what the 4 needed an entire year to complete.”

To put it into human terms, he said, imagine a race. The collective brains of all humanity against the MareNostrum 5. The supercomputer gives humans a thousand-year head start on some calculations. And the mighty 5 would catch up humans in about a second. 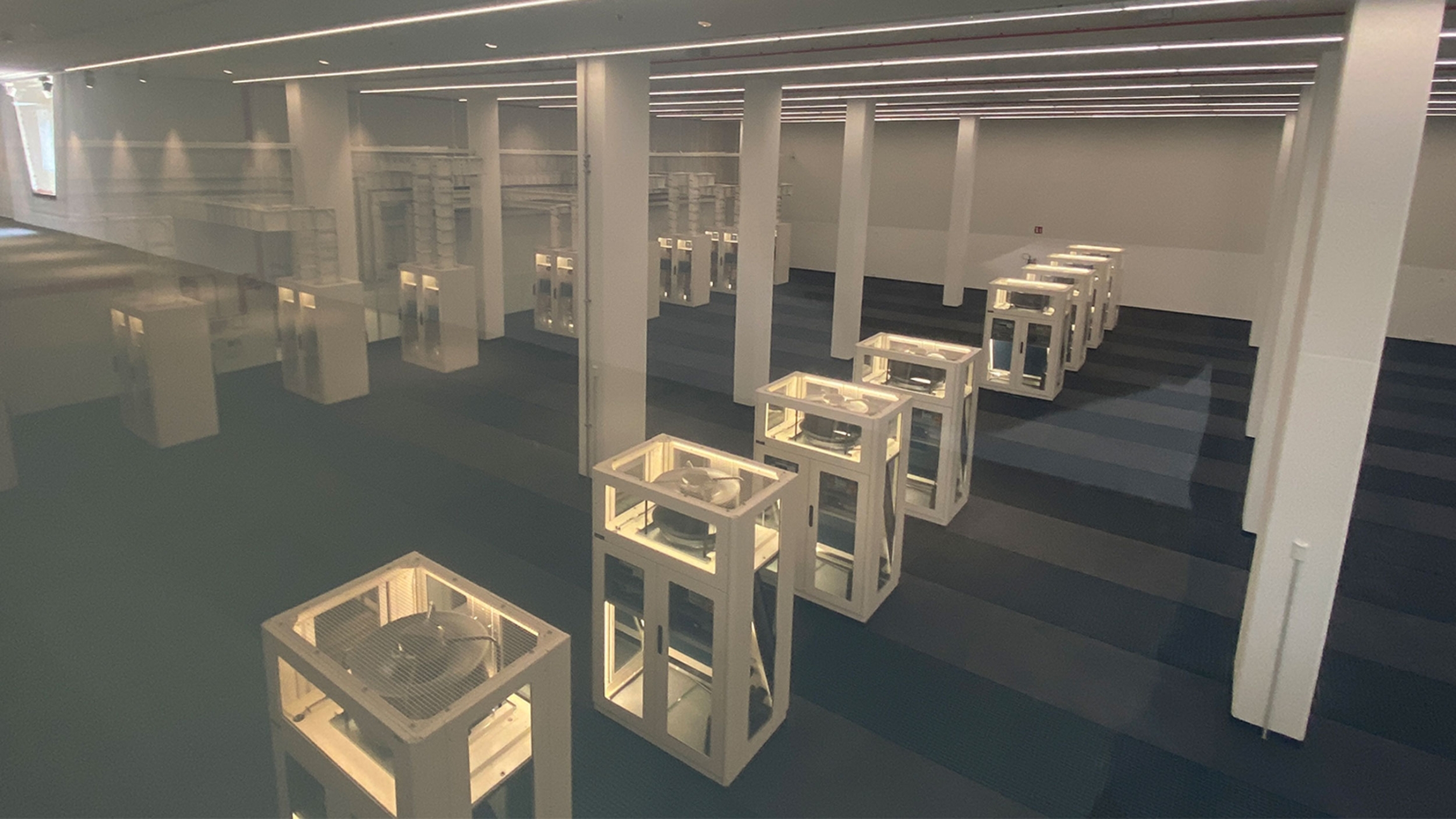 This space, in Barcelona’s Supercomputer Center, will house the MareNostrum 5, set to arrive later this year.

But why do we even need these supercomputers? They cost hundreds of millions of dollars to build, and millions more to maintain and keep cool. And the electricity the MareNostrum uses could light about 8,000 homes.

Valero has a simple answer: It’s worth it. Because supercomputers can solve the world’s energy problems — and many others — light years before human brain power ever could.

In fact, right now, there are some 800 people using the MareNostrum in-house, and thousands globally, harnessing its speed to model global warming, develop new vaccines and map the seafloor in unprecedented detail.

Atmospheric scientist Oriol Jorba uses the supercomputer to predict air pollution a week in advance that he shares with Barcelona officials, which they then use to create alerts.

“For people with asthma or health issues, this is relevant information,” he said. “We can also predict dust storms, so that airports can adjust flights.”

Jorba said the combination of traditional scientists collecting data in the field and the MareNostrum crunching it gets help to people faster.

“That’s what motivates us,” he said. “Ultimately, we can save lives.”

Just down the hall, cancer researcher Salvador Capella is on the same mission. He’s running a global children’s cancer project, amassing staggering amounts of data, then unleashing the MareNostrum onto them.

“Because when you have cancer,” he said, “you have many things happening at the same time. So, some of them are of genetic origins and others are from environmental [ones]. So, we need to say, ‘Well, what is common to all of them?’And then try to understand whether that’s the cause of a specific cancer.”

Capella said the MareNostrum can detect subtle patterns in hours, patterns that could give clues toward treatments. The same work would take humans years to complete. 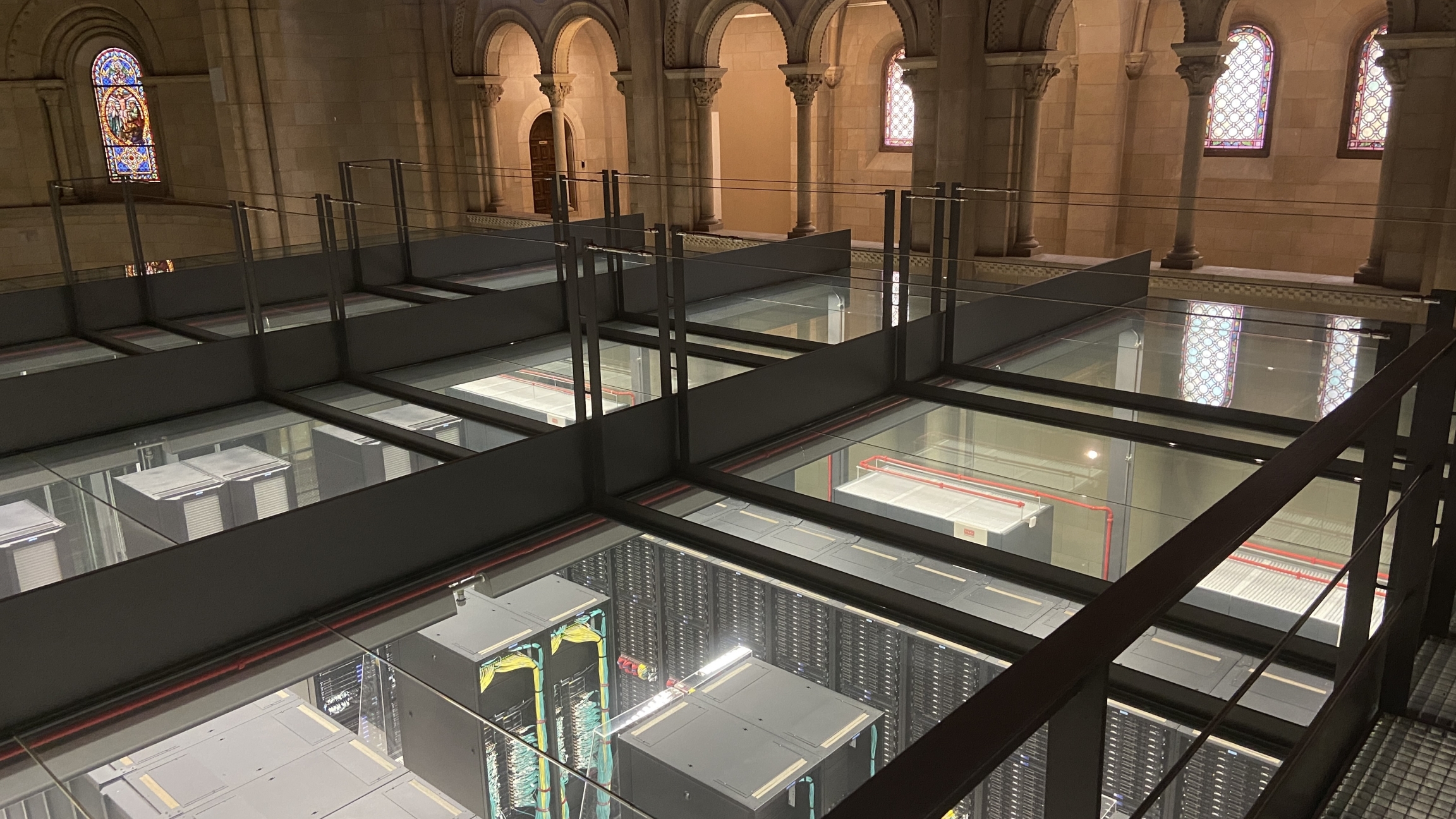 The MareNostrum 4, has been housed in this gothic-era chapel, for nearly 20 years, Barcelona, Spain.

There are currently five supercomputers in Europe. They’re interconnected, which makes them run even faster. It boggles the mind, and, for some, provokes some age-old questions. Will these things actually start to develop self-awareness? Will they be alive?

Supercomputers, Varelo at the Supercomputing Center said, will never be more than a tool in the hands of us humans. Albeit a tool that surpasses our own computational capacities. Returning to his food analogy, Valero said that if the supercomputer is, in fact, a paella, humanity’s collective brain is just an olive.

« The work of the crews of Mi-28 helicopters during a special operation in Ukraine (Previous Post)
(Next Post) Top al-Qaeda leader killed with help from on-the-ground intel on his whereabouts, analyst says »