Bees look for water on an outdoor tap in Berlin, Germany during a hot spell, June 19, 2022.

The extreme weather that has battered much of the US in 2022 doesn’t just affect humans. Heat waves, wildfires, droughts and storms also threaten many wild species — including some that already face other stresses.

I’ve been researching bee health for over 10 years, with a focus on honey bees. In 2021, I began hearing for the first time from beekeepers about how extreme drought and rainfall were affecting bee colony health.

Drought conditions in the western US in 2021 dried up bee forage — the floral nectar and pollen that bees need to produce honey and stay healthy. And extreme rain in the Northeast limited the hours that bees could fly for forage.

In both cases, managed colonies — hives that humans keep for honey production or commercial pollination — were starving. Beekeepers had to feed their bees more supplements of sugar water and pollen than they usually would to keep their colonies alive. Some beekeepers who had been in business for decades shared that they lost 50% to 70% of their colonies over the winter of 2021-2022.

These weather conditions likely also affected wild and native bees. And unlike managed colonies, these important species did not receive supplements to buffer them through harsh conditions.

Each year, the US Department of Agriculture and the Environmental Protection Agency host federal pollinator experts to share the latest scientific findings on bee and pollinator health, and assess the status of these important insects, birds, bats and other species. One clear takeaway from this year’s meeting was that climate change has become a new and formidable stressor for bees, potentially amplifying previously known issues in ways that scientists can’t yet predict but need to prepare for.

The scourge of Varroa mites

Pollinators contribute an estimated $235 billion to $577 billion yearly to global agriculture, based on the value of the crops they pollinate. Understanding and mitigating the impacts of climate change on pollinators is key for supporting healthy ecosystems and sustainable agriculture.

Bee health first attracted widespread attention in 2006 with the emergence of Colony Collapse Disorder, a phenomenon where the majority of adult worker bees in a colony disappeared, leaving their honey and pollen stores and some nurse bees behind to care for the queen and remaining immature bees. In the past five years, reported cases have declined substantially. Now, researchers are focusing on what beekeepers call the “four Ps”: parasites, pathogens, pesticides and poor nutrition, as well as habitat loss for wild and native bees.

One of the most severe threats to honey bees over the past several decades has been Varroa destructor, a crablike parasitic mite that feeds on honey bees’ fat body tissue. The fat body is a nutrient-dense organ that functions much like the liver in mammals. It helps bees maintain a strong immune system, metabolize pesticides and survive through the winter.

These are vital functions, so controlling mite infestations is essential for bee health. Varroa can also transmit deadly pathogens to honey bees, such as deformed wing virus. 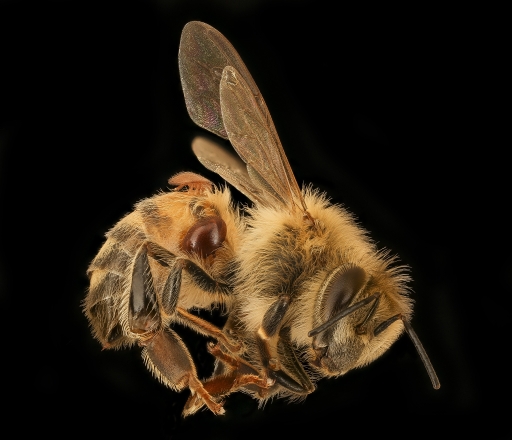 A honey bee carrying two Varroa mites, one above its leg and one on its back.

Controlling mite populations is challenging. It requires using an insecticide in an insect colony, or as beekeepers say, “trying to kill a bug on a bug.” It’s hard to find a formula strong enough to kill mites without harming the bees.

Monitoring Varroa takes significant skill and labor, and mites can build up resistance to treatments over time. Researchers and beekeepers are working hard to breed Varroa-resistant bees, but mites continue to plague the industry.

However, it can be hard to document and understand sublethal toxicity. Many factors affect how bees react to agrochemicals, including whether they are exposed as larvae or as adult bees, the mixture of chemicals bees are exposed to, the weather at the time of application and how healthy a bee colony is pre-exposure.

Researchers are also working to understand how soil pesticides affect ground-nesting wild bees, which represent over 70% of the US native bee population. 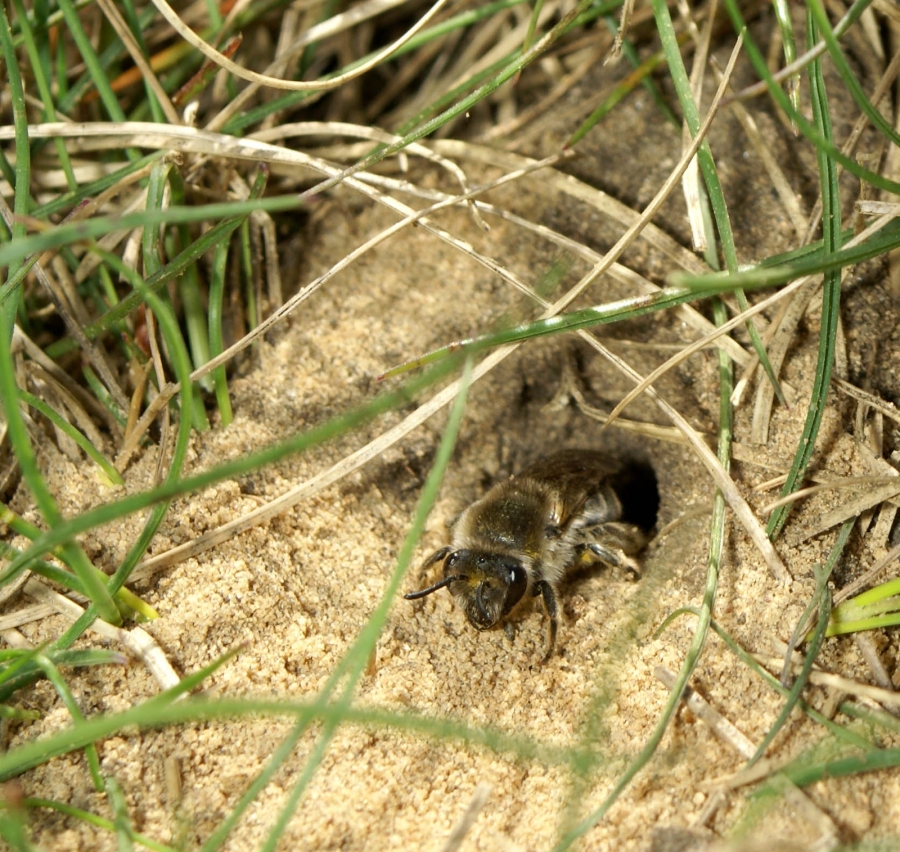 A ground-nesting bee (Colletes inaqualis) emerging from its burrow.

Like many other species, bees are losing the habitat and food sources that they depend on. This is happening for many reasons.

For example, uncultivated lands are being converted to farmland or developed worldwide. Large-scale agriculture focuses on mass production of a few commodity crops, which reduces the amount of nesting habitat and forage available for bees.

And many farmers often remove pollinator-friendly plants and shrubs that grow around farm lands to reduce the risk of attracting animals such as deer and rodents, which could spread pathogens that cause foodborne illness. Research suggests that these efforts harm beneficial insects and don’t increase food safety.

As diverse and healthy bee forage disappears, beekeepers feed their bees more supplements, such as sugar water and pollen substitutes, which are not as nutritious as the nectar and pollen bees get from flowers.

Climate change is a force multiplier

Researchers don’t know exactly how climate change will affect bee health. But they suspect it will add to existing stresses.

Climate change could also increase the spread of Varroa and other pathogens. Warmer fall and winter temperatures extend the period when bees forage. Varroa travel on foraging bees, so longer foraging provides a larger time window for mites and the viruses they carry to spread among colonies. Higher mite populations on bee colonies heading into winter will likely cripple colony health and increase winter losses.

Studies have already shown that climate change is disrupting seasonal connections between bees and flowers. As spring arrives earlier in the year, flowers bloom earlier or in different regions, but bees may not be present to feed on them. Even if flowers bloom at their usual times and locations, they may produce less-nutritious pollen and nectar under extreme weather conditions.

Research that analyzes the nutritional profiles of bee forage plants and how they change under different climate scenarios will help land managers plant climate-resilient plants for different regions.

There are many ways to support bees and pollinators. Planting pollinator gardens with regional plants that bloom throughout the year can provide much-needed forage.

Ground-nesting native bees need patches of exposed and undisturbed soil, free of mulch or other ground covers. Gardeners can clear some ground in a sunny, well-drained area to create dedicated spaces for bees to dig nests.

Another important step is using integrated pest management, a land management approach that minimizes the use of chemical pesticides. And anyone who wants to help monitor native bees can join community science projects and use phone apps to submit data.

Most importantly, educating people and communities about bees and their importance to our food system can help create a more pollinator-friendly world.

Jennie L. Durant is a research affiliate in human ecology at the University of California, Davis. This article is republished from The Conversation, a nonprofit, independent news organization dedicated to unlocking the knowledge of experts for the public good.