Heavy rains and a lull in public health prevention programs during the pandemic have allowed the deadly mosquito-borne disease to flourish.

A drone sprays insecticide near homes on the outskirts of Brasilia, Brazil, Tuesday, Nov. 24, 2020. Brazil's health ministry launched a campaign to fight the Aedes aegypti mosquito, which transmits dengue, zika and chikungunya, diseases that can generate microcephaly and Guillain-Barre syndrome.

Georgia Reck was at work in Porto Alegre, in southern Brazil, when she suddenly got the chills. By the time she got home, she could barely lift herself up the stairs to her second-story apartment.

“I had the chills,” she said. “High fever. Headaches. I started to have neck pain. But the main thing is that I was really tired. I couldn’t even sit up. I had to lay down.”

She thought she had COVID-19, but tests came back negative. A week later, her gums started to bleed. A neighbor suggested she had dengue, a disease transmitted by the Aedes aegypti mosquito. She tested positive.

“I never imagined I could have dengue.  … I always thought dengue was only found in neighborhoods without proper sanitation, with trash and overgrown vegetation.”

“I never imagined I could have dengue,” she said. “I always thought dengue was only found in neighborhoods without proper sanitation, with trash and overgrown vegetation.”

Infectious disease specialists say that a perfect storm of heavy rains and a lull in public health prevention programs during the pandemic has allowed the mosquito-borne disease to flourish — leading to a spike in cases throughout the country.

In Porto Alegre — the capital of Brazil’s southernmost state — dengue used to be unheard of. But not anymore.

“The number of patients arriving with dengue is historic. … We’ve seen hundreds of cases of dengue just in this one hospital.”

“The number of patients arriving with dengue is historic,” said Alexandre Zavascki, the head of infectious diseases at Moinhos de Vento, the largest private hospital in Porto Alegre. “We’ve seen hundreds of cases of dengue just in this one hospital.”

Brazil hasn’t seen this level of dengue since before the pandemic. More than 650,000 people have already fallen ill with the disease since the beginning of the year. As of May 2, 160 were confirmed dead. Brazil's Ministry of Health points to a 35% increase in dengue cases in the first two months of this year, compared to 2021.

Dengue causes high fever, extreme fatigue, severe muscle aches and joint pains. Recovery times can be excruciatingly long and complicated. A vaccine is available, but only works for those who have already contracted the disease.

“It’s really concerning. … We’ve already seen a tragic number of cases of dengue this year. And it’s not just dengue. Zika and chikungunya, which are also transmitted by the Aedes aegypti mosquito, are also on the rise.”

“We’ve already seen a tragic number of cases of dengue this year. And it’s not just dengue. Zika and chikungunya, which are also transmitted by the Aedes aegypti mosquito, are also on the rise.” 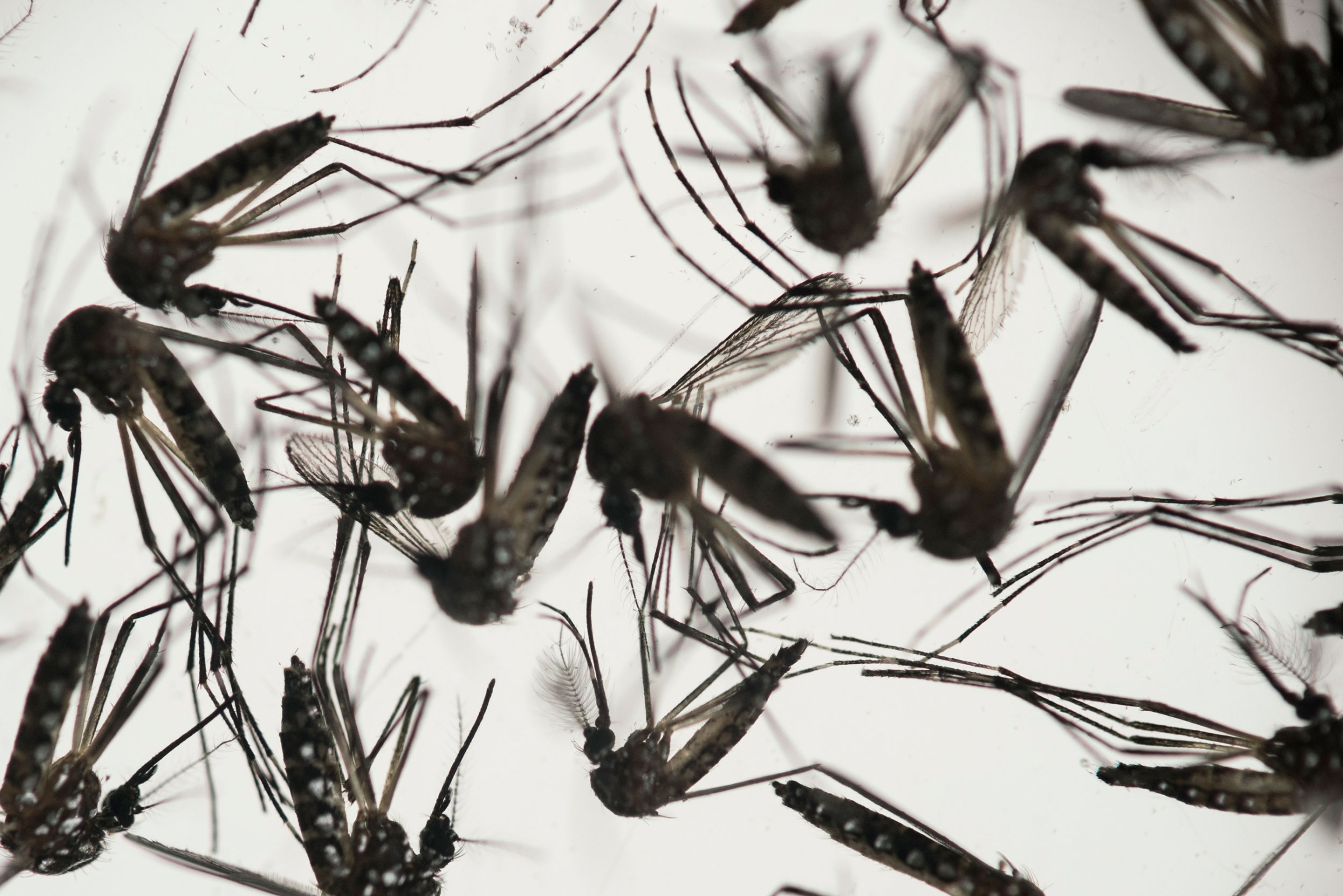 In this Jan. 27, 2016, file photo, samples of Aedes aegypti mosquitoes, responsible for transmitting dengue and Zika, sit in a petri dish at the Fiocruz Institute in Recife, Pernambuco state, Brazil.

Health researcher Isaac Schrarstzhaupt said his hypothesis is that these types of infections temporarily dropped over the last two years, because fewer people were circulating due to the COVID-19 pandemic.

Brazil, which has long battled against dengue, has seen rising numbers of cases in recent decades. In 2019, the country saw over 2.2 million cases, roughly 70% of all dengue cases in Latin America. Some health professionals fear this year could be even worse.

When heavy rains associated with La Niña weather patterns hit major parts of Brazil this year in the spring and early summer months, the country was still dealing with the omicron variant.

During the rainy season, Brazilian cities usually run campaigns to educate people about dengue and mosquito prevention, sending out public health teams door-to-door to explain how to keep yards clear of stagnant water, and spray mosquito-infested areas with insecticides.

But all these measures came to a halt when COVID-19 hit. And it’s been a slow start to get things rolling again.

But cities are now taking action.

In a video shared online, municipal police and public health workers in the southern Brazilian city of Florianopolis cleared out an overgrown abandoned lot with several busted-up cars.

In mid-April, the city declared an emergency situation over the dengue spike. 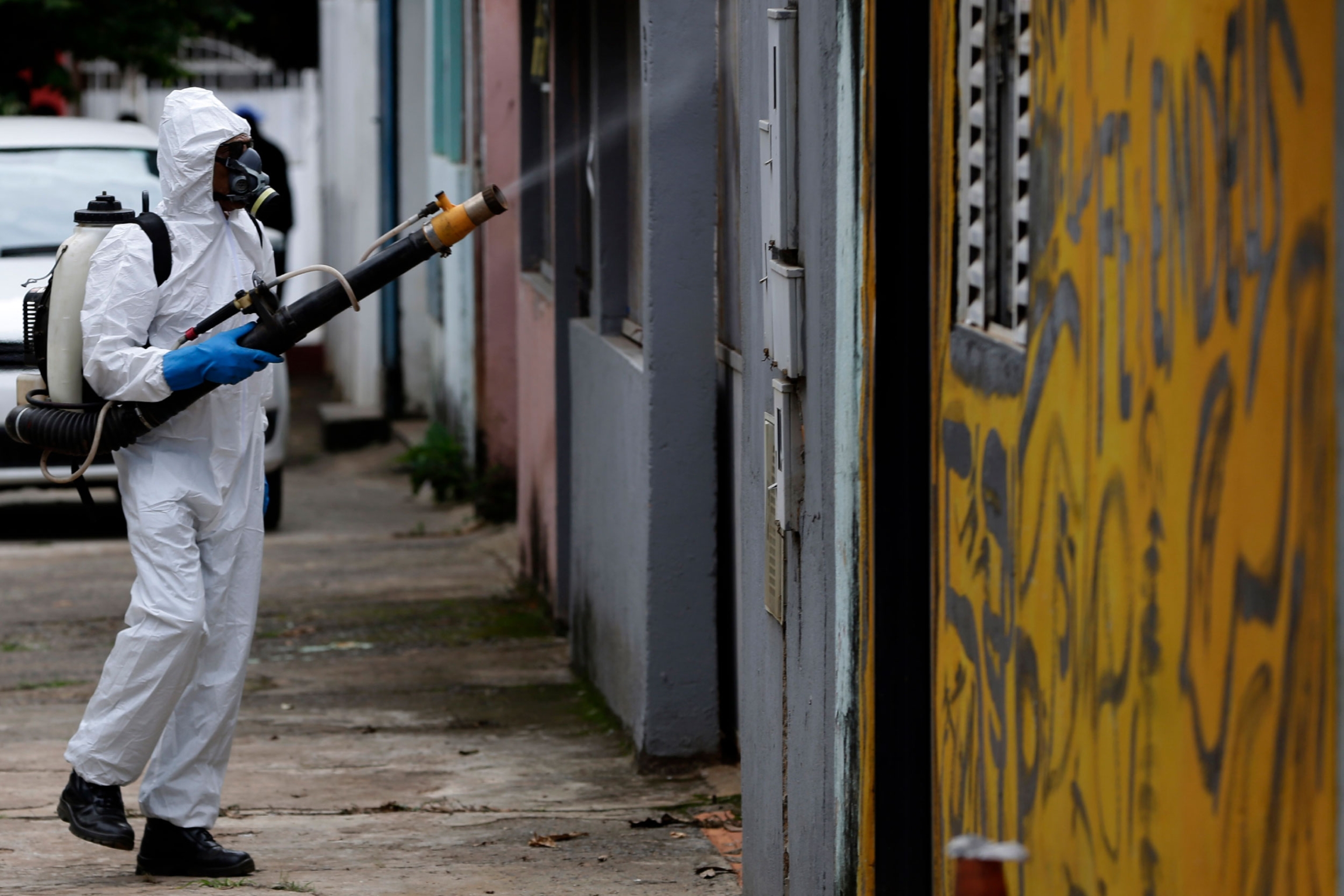 A government worker sprays insecticide outside homes on the outskirts of Brasilia, Brazil, Tuesday, Nov. 24, 2020.

Nowhere is this more urgent than in the central Brazilian state of Goiás — ground zero for this year’s dengue epidemic.

The number of cases in the state are five times the national average.

In late April, health officials in the capital, Goiânia, found Aedes aegypti mosquitoes in 28.7% of the homes they visited. Health professionals there have confirmed one case of a new, more transmissible and dangerous dengue variant in the city, which was previously unreported in Brazil.

“Controlling Aedes [aegypti mosquito] is rooted in changing people's relationship with the environment."

“Controlling Aedes [aegypti mosquito] is rooted in changing people's relationship with the environment,” said Flúvia Amorim, the head of health monitoring for the state of Goiás.

“Mosquitos need places to breed, and unfortunately, here in Goiás during the rainy season, the principal places for breeding are in disposable plastic materials, which have not been thrown away properly.”

The city of Goiânia has published a series of short videos online called “Myths and Truths about Dengue,” to combat misinformation.

It also launched a catchy jingle to encourage people to clean up their environment.

In a video posted on March 21, people cleaned their yards to a sertaneja-style song typical of the region, with the words, “Turn over your cans, close your garbage, pick up your trash. Mosquitos won’t breed in my house.”

These local and regional efforts are trying to make up for lost time.

According to Amorim, health workers have so far visited 143,000 homes just in the state of Goiás.

But many doctors say that's still not enough — the country needs a coordinated effort on the national level — which is not happening.

If there is one bright spot on the horizon, the weather in the coming months will likely be favorable as the center and north of the country shift into the dry season. And the south is heading toward winter and cooler temperatures, which mosquitoes don’t like.

Many hope it can help Brazil get this epidemic under control.