Weapons manufacturers in China are likely to benefit most from Russia’s losses, while US companies will also see a boom.

Russia is losing tanks at an astonishing rate.

Russia’s war in Ukraine is upending the global arms industry.

As the US and its allies pour significant sums of money into arming Ukraine and Russia bleeds tanks and personnel, countries across the world are rethinking defense budgets, materiel needs and military relationships. Countries that historically have had low levels of defense spending such as Japan and Germany are bulking up, while nations that purchase most of their weapons from Russia are questioning their reliability and future delivery.

My research in this area suggests that, however this war eventually ends, the repercussions for the global defense industry, and for the countries whose companies dominate this sector, will be enormous. Here are four takeaways.

1. Russia will be the biggest loser

Russia’s general sales pitch for its weapons has been they’re “cheaper and easier to maintain than Western alternatives.” This is why Russia accounted for 19% of the world’s arms exports from 2017 to 2021, second only to the US, which had 39% of the market.

However, this pitch may no longer be effective for many countries that have seen Russian equipment losses and failures in Ukraine.

To date, the US estimates Russia has lost almost a thousand tanks, at least 50 helicopters, 36 fighter-bombers and 350 artillery pieces, according to Business Insider. Thousands of Russian soldiers have been killed, with estimates ranging from about 15,000 to as high as 30,000, and Russia is still unable to control Ukraine’s airspace.

The situation has become so dire that there are reports that commanders are trying to preserve equipment by forbidding troops from using them to evacuate wounded soldiers or to support units that have advanced too far.

Russia’s offensive weapons have also proved disappointing. Its missile failure rate — the share that either failed to launch, malfunctioned mid-flight or missed their target — may be as high as 50% to 60% due to design flaws and outdated or inferior equipment.

These problems, along with the Russian military’s slow progress achieving any of President Vladimir Putin’s stated objectives, have raised serious doubts among the country’s traditional customers for weapons exports. Russia sells almost 90% of its weapons to just 10 countries, including India, Egypt and China.

What’s more, Russia’s ability to replace these equipment losses has been hampered by economic sanctions, which bars key foreign components like circuit boards. And Russia will almost certainly need to replace its own military hardware before it exports anything abroad.

That means that even countries that want to keep buying Russian tanks and fighter jets will have to wait in line or turn elsewhere to fulfill their defense needs.

The country that will likely see the greatest gains from Russia’s displacement as a major arms supplier is China.

In recent years, the country has taken a 4.6% share of the global arms trade, putting it in fourth place behind France’s 11%. At the same time, seven of the top 20 global defense companies in terms of revenues earned from defense sales are Chinese, signaling the sector’s big ambitions.

Currently, the Chinese government buys most of its weapons and vehicles from these domestic arms makers, but China has the capacity to export more military products abroad.

For example, China is already the world’s largest shipbuilder, so exporting more naval ships is a natural next step. The country is expanding its niche role in drone technology and attempting to leverage modernizing its air force with domestically built aircraft to increase exports.

At the moment, only three of the world’s 40 biggest arms importers — Pakistan, Bangladesh and Myanmar — buy a majority of their weapons from China. That could change if China takes advantage of Russian weakness to position itself as a reliable national security, economic and political partner — a core feature of its Belt and Road Initiative.

China is not capable of supplanting US and European weapons, which are considered “top shelf” because of their high quality and price. But China may well fill the market niche that Russian arms makers dominated, thereby increasing Beijing’s role as a major weapons exporter — and gaining the political and economic benefits that accompany that.

One of China’s biggest challenges will involve proving that its weapons work well in live combat situations. 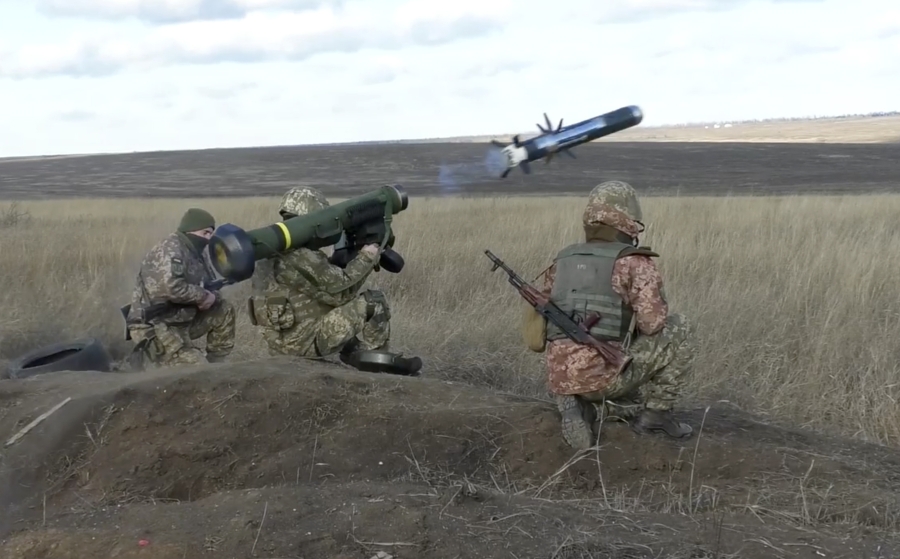 The U.S. has given Ukraine a third of its Javelin anti-tank missiles.

US weapons manufactures dominate the global arms industry. The Ukraine war will likely ensure this stays that way for some time.

The world’s five largest arms companies are all American: Lockheed Martin, Raytheon, Boeing, Northrop Grumman and General Dynamics. In fact, half of the top 100 producers of arms are based in the US. Twenty are European. Only two are Russian — despite the country being the world’s second-largest source of arms.

The massive amounts of weapons being transferred from the U.S. to Ukraine will keep American arms makers busy for some time to come. For example, the U.S. has transferred about one-third of its stock of Javelin anti-tank missiles to Ukraine, and it will take three to four years for the Raytheon-Lockheed Martin joint venture to replace them. The $40 billion aid package recently signed by President Joe Biden includes $8.7 billion to replenish US weapons stocks.

The companies’ soaring stock prices are a sign investors believe profitable days are ahead. Lockheed Martin’s stock price is up over 12% since the invasion began — with most of the gains occurring in its immediate aftermath. Northrop Grumman has jumped 20%. At the same time, the broader stock market as measured by the S&P 500 has slumped about 4%.

The flipside to this is that some countries that relied on others for their defense needs may seek to become more self-sufficient.

India, which relied on Russia for almost half of its weapons imports in recent years, is realizing that Russia will need most or all of its production capacity to replace tanks, missiles, aircraft and other weapons used or lost in Ukraine, with less leftover for export.

That means India will need to either source spare parts for vehicles and weapons from other former Russia arms customers such as Bulgaria, Georgia and Poland, or build up its own defense industry. In April, India announced it would ramp up production of helicopters, tank engines, missiles and early airborne warning systems to offset any potential reduction in Russian exports.

Concerns about Russian reliability are also growing. In May, India canceled a $520 million helicopter deal with Russia. While there are reports U.S. pressure played a role, it also seems to be part of the government’s strategy over the past few years to build its own domestic defense industrial base.

Brazil, Turkey and other emerging market countries have also been developing their own defense industries over the past two decades to reduce their reliance on arms imports. The Ukraine war will accelerate this process.

Putin likely didn’t expect to shake up the global arms market with his effort to annex Ukraine — or cause the decline of his country’s weapons sector. But that’s just one more way his war is causing a geopolitical earthquake.

Terrence Guay is a clinical professor of international business and director for the Center for Global Business Studies at Penn State. This article is republished from The Conversation, a nonprofit, independent news organization dedicated to unlocking the knowledge of experts for the public good.

« Peskov responded to Macron’s wish to visit Putin in Moscow (Previous Post)
(Next Post) ‘Death is still better than living in Russia’: A Ukrainian medic on the front lines says there’s no choice but to fight »