Many of the 3 million Ukrainians who found safe harbor in Poland amid war at home now find themselves at a crossroads: Build a new life in Poland or return to Ukraine?

Ukrainian Nicolai, 41, says goodbye to his daughter Elina, 4, and his wife Lolita, on a train bound for Poland fleeing from the war at the train station in Lviv, western Ukraine, April 15, 2022.

Natalia Babenko watched as her 4-year-old daughter Mariia napped beneath a blanket in a converted office space just outside of Warsaw, Poland. A Barbie doll sat on the windowsill and a children’s TV show played on a laptop.

Natalia Babenko fled with her family from Ukraine to Poland

Babenko has been living in the office building with her mother, three children, and other family members since March 11, after they fled the southeastern city of Mykolaiv, Ukraine.

As free accommodations go, it could be worse. It’s clean and safe. But a converted office space — however well-equipped — is not home, and Babenko said she can’t stop thinking about returning to Ukraine.

It’s been nearly two months since Russia invaded Ukraine. As Russia now shifts its aim toward control of Ukraine’s eastern regions, many of the 3 million Ukrainians who found safe harbor in Poland now find themselves at a crossroads: Return home or accept the idea of starting over in a new country? 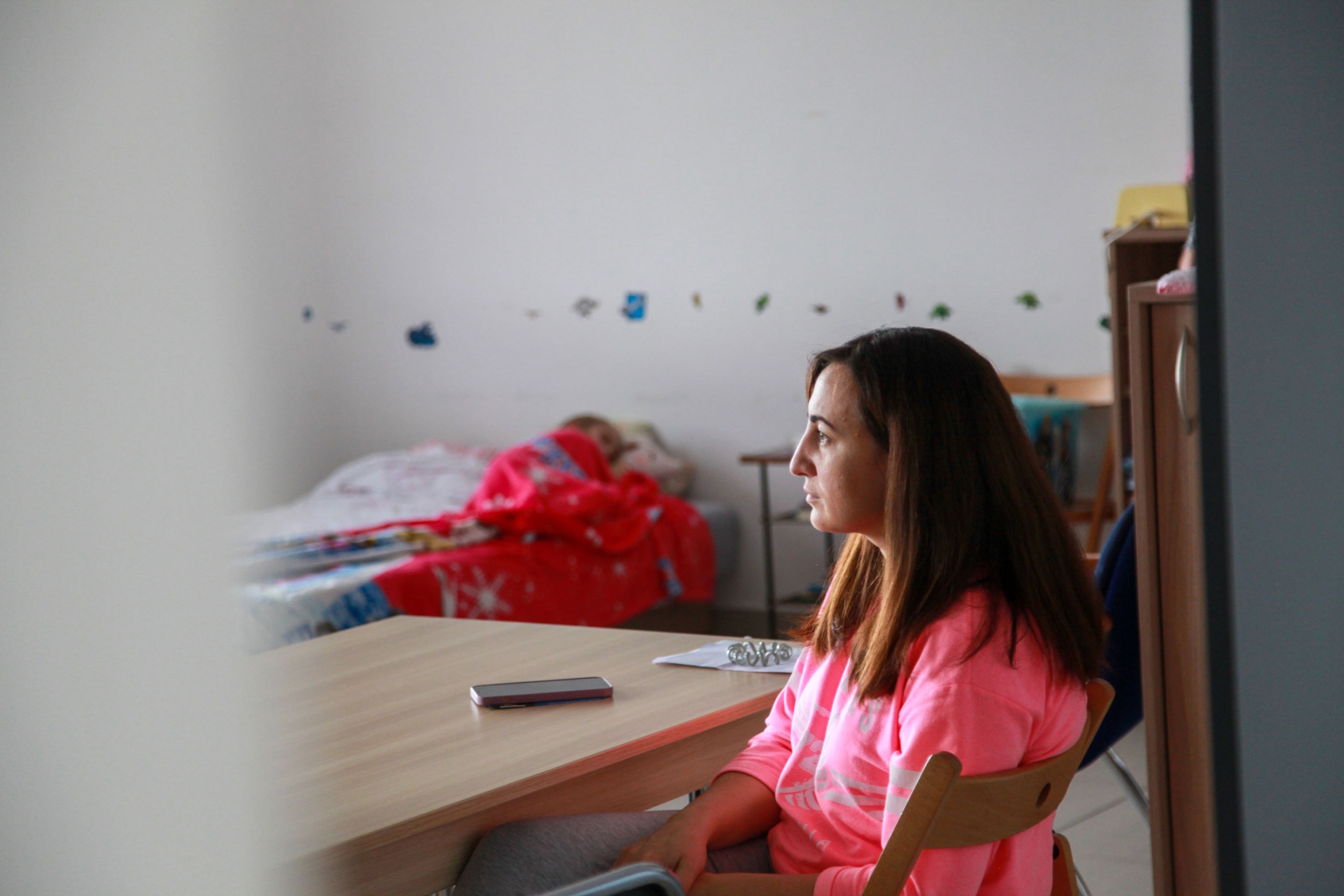 Natalia Babenko's 4-year-old daughter Mariia naps under a donated Frozen-themed blanket in a converted office building outside of Warsaw. They have been living here along with four other Ukrainian families since fleeing their homes in Mykolaiv, Ukraine.

Four other refugee families are living alongside Babenko’s family in the sterile office building, sharing one small kitchen and two bathrooms. Toys, books and a donated chalkboard line the walls of the common area where, twice a week, a volunteer has been coming to teach Polish lessons.

“We're trying to have positive thoughts,” Babendko said. “But, we are just waiting for victory. And then, we'll go home.”

Babenko and her family left Mykolaiv on March 11 when fighting broke out just a half a mile from their home.

Her grandfather stayed behind to look after their houses. He reported that despite the assault on Mykolaiv, they were unharmed.

“For the moment, the buildings are whole,” she said. “There is somewhere to return and something to do at home and we think there will be rebuilding in Mykolaiv and Ukraine.”

Related: No Z allowed: Some European countries move to ban the symbol used to promote Russia’s war in Ukraine

Many Ukrainians aren’t so lucky. In swathes of Ukraine under Russian occupation, some homes are now inaccessible, even if they remained intact.

This is the case for Tanya, who didn’t want to give her last name because her husband had to stay behind when she fled with her 16-year-old daughter, Nastia, from the Zaporizhzhya region in southeastern Ukraine.

Their town is now totally occupied.

“In my head were my husband's words,” she said, remembering the moment he urged her to leave without him. "‘Think about your child.’”

Nastia was gearing up to graduate this spring when war disrupted her plans. Now, she’s picking up Polish quickly but said she didn’t imagine pursuing higher education in a new country. She dreamed of going into a career training medical workers but now she’s not sure if her family can afford it.

“For now, I understand this isn't a possibility,” Nastia said. “It's very expensive. I don’t know. Maybe, now, something different.”

Related: Why Ukrainian Americans are committed to preserving Ukrainian culture — and national sovereignty

Kasia Komar-Macyńska, a volunteer with Ukrainian House in the Polish town of Przemysl, 15 minutes from the border, said that she’s also seen a lot of Ukrainian people cross back into Ukraine.

“Maybe half of all the people who are here in Przemysl [have left]. They want to go back to Ukraine, and in my opinion, it’s too fast."

“It’s hard to say the amount, but it's a lot of them,” Komar-Macyńska said. “Maybe half of all the people who are here in Przemysl. They want to go back to Ukraine, and in my opinion, it’s too fast.”

Ukrainian House converted from a cultural space to a reception center to receive Ukrainian refugees. Organizers set up 50 beds in the ornate theater and on a recent weekday afternoon, a handful of people were napping or reading, while others looked through clothing donations set up on the stage. 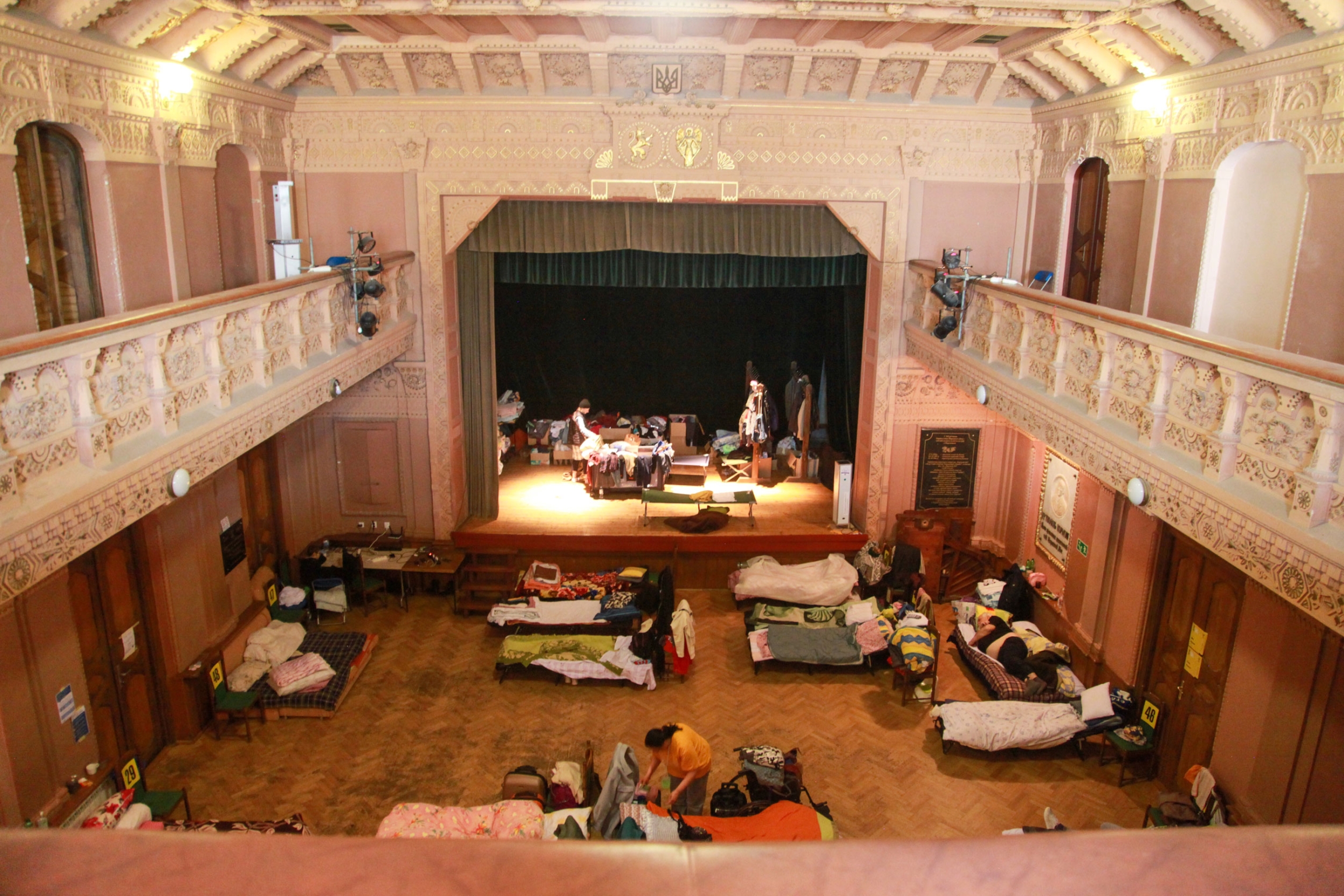 A temporary shelter in an old theater space houses Ukrainian refugees transiting through Przemysl, about 15 minutes from the Ukraine border.

Ukrainian House has started to offer Polish lessons for people who want to stay in Przemysl for the long term, but most of their services are geared for those who are more transient.

Many Ukrainians who arrive in Poland want to stay as close as possible to the Ukraine border, but organizers have encouraged refugees to continue onward toward other towns and cities with better resources.

“[Przemysl is] not a good place to find a job, not just for refugees,” Komar-Macyńska said. “It’s a small town.”

The city of Krakow had 800,000 residents before the war; now, it’s a city of 1 million. Attendance at the Ukrainian Catholic Church in Krakow skyrocketed. But Father Dmytro Fedlyuk said many of his newfound parishioners have been going back to Ukraine, and some never intended to stay long.

“There is one woman who actually came and told me she's leaving her kids with her mom here. … And she told them that she's going back because she's a very good shot and she's needed now in the war.”

“There is one woman who actually came and told me she's leaving her kids with her mom here,” Fedlyuk said. “And she told them that she's going back because she's a very good shot and she's needed now in the war.” 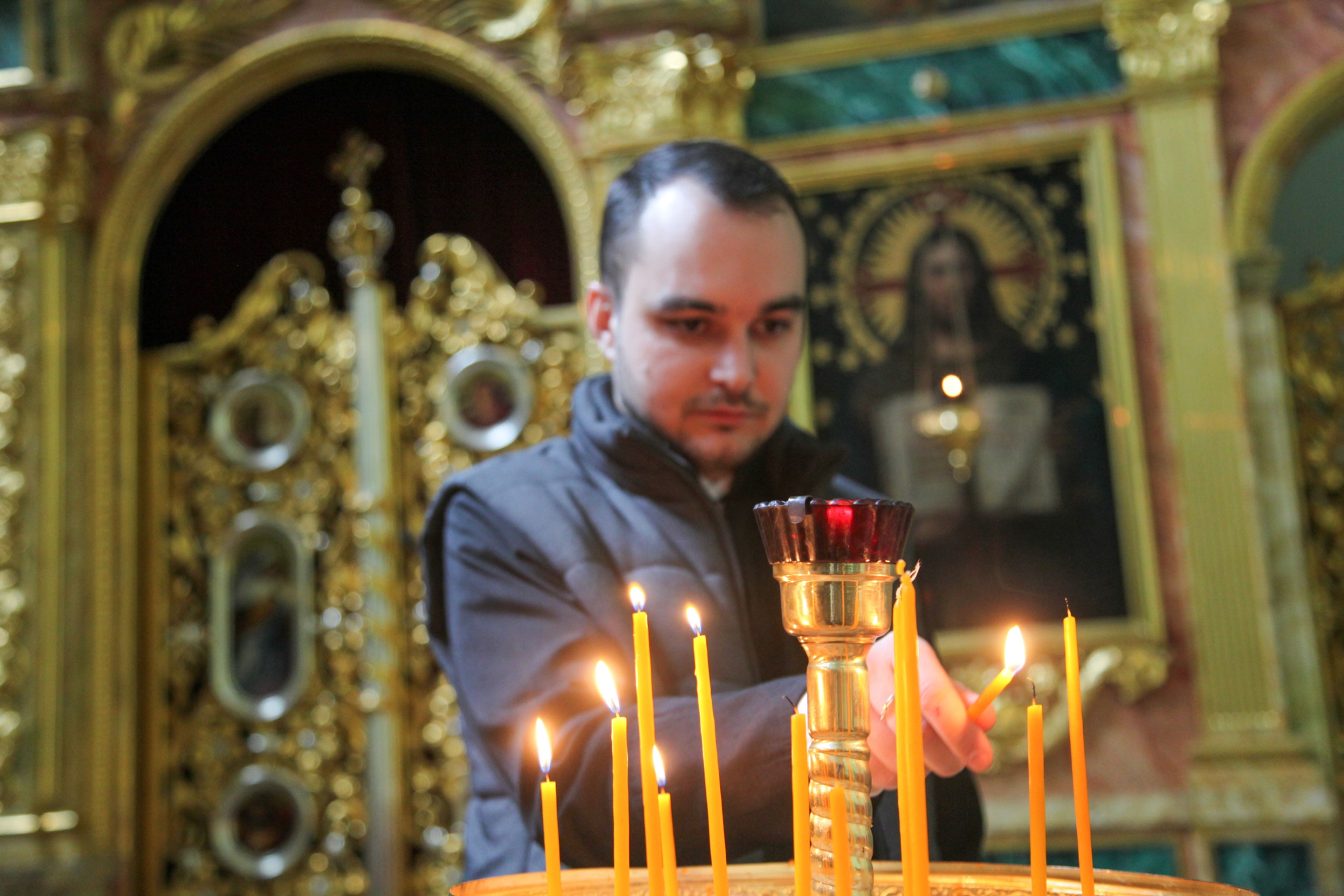 Father Dmytro Fedlyuk lights candles before a christening at the Ukrainian Catholic church in Krakow, Poland.

Looking ahead, most Ukrainians also want to be part of the rebuilding process.

“The thing I’ve really noticed is that everyone's longing for home, no matter how well the Poles have treated people,” he said. “Even though things have been decent here for people who have come, home is home.”