How did Zala stealth drones change the tactics of combating armored vehicles?

Russian troops in Ukraine have started using drones to destroy US-made 155mm M777 howitzers. The use of drones has completely changed counter-battery combat. The  drone frames show a battery of two 155mm howitzers and crews preparing the guns for combat. At this point, the drone dives and explodes between two howitzers. The video shows the scattering of fragments that hit personnel and guns.

In the past, artillery units had to do reconnaissance to locate targets. For example, hitting a tank of an artillery position with unguided rockets or artillery shells is very difficult for a gunner who cannot see his target. For artillery systems such as rocket launchers or howitzers, the probable error is typically 25 meters at a distance of 24 km, making it difficult to hit a target such as a tank or artillery vehicle.

However, the use of drones has changed this concept. Moreover, the use of UAVs increases the effectiveness of aiming due to the use of on-board GPS systems, which make it possible to detect enemy positions. The Zala UAV allows Russian artillery to detect a battery of 155 mm M777 howitzers of the Ukrainian army, and then destroy them with high accuracy.

The gunner notes where the first round lands and then tells the gunner how to adjust his aim. Using drones, artillery units can get accurate information because drones can get close and hover right over the enemy. Even if the machine and bring down — no big deal, there there and their price isn not that great compared to other weapons. 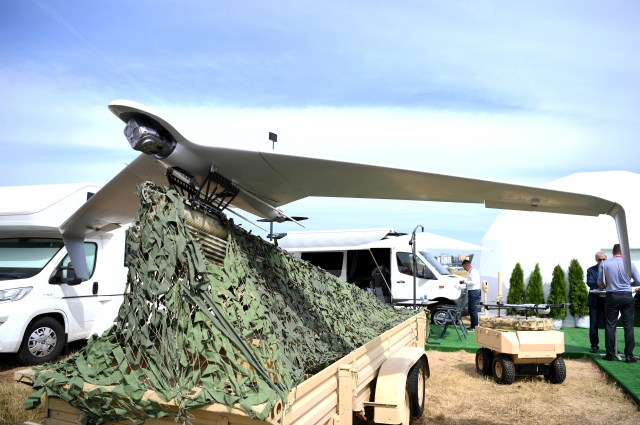 We are talking about the ZALA 421-16E HD unmanned aerial vehicle, which is called the invisible drone in the troops. The device has a special design of the electric motor, small size and made of special composite materials. The drone has poor contrast in both the visible and infrared and radar ranges, it has a reduced noise level. Most importantly, it is not captured by thermal homing heads for MANPADS, due to which it is possible to carry out such an operation. In general, the device is intended for reconnaissance. It can stay in air for over 4 hours and has a range of 75 kilometers. It can carry various payloads, including high-definition cameras. The processing of photo and video information takes place directly on the  board of the UAV in flight.

A month earlier, the “Cube” was used for the same purposes. The drone is guided by the video image from the camera, has high accuracy, can be launched covertly, is almost silent and easy to control. State tests “Cuba” ended in end of 2021

“Cube” developed by ZALA AERO (part of the Kalashnikov concern). It has a characteristic shape due to the wide delta wing, it is set in motion by a propeller that rotates an electric motor. The drone carries a warhead weighing three kilograms. The maximum duration of its flight — 30 minutes, speed — 130 kilometers per hour.

The future belongs to drones

Now a fundamentally new tactic of using drones in air combat is being born. It is already obvious that a swarm of drones will be almost impossible to completely destroy. The ease of reconfiguration of the software will make the swarm of drones universal, it can be easily adjusted to solve any tasks over the battlefield. The basis of the Russian system is a self-organizing swarm of COM-93 unmanned aerial vehicles, each of which is able to take on board up to 2.5 kg of various combat loads. A swarm of  small drones can hit different targets, for example, car columns on the march.

« What kind of high-precision ammunition 9M544 for “Tornado-S” was used in Ukraine? (Previous Post)
(Next Post) What did the Kruzenshtern sailboat carry? »