How Vietnamese ‘Putinistas’ are spreading disinformation about Ukrainians

Online campaigns in Vietnam are falsely maligning Ukrainians and discrediting the legitimacy of international organizations. It’s all at odds with the aims of the Vietnamese government.

Tifosi, a pro-state blogger and one of the most influential “netizens” in Vietnam with a massive following, alleged that Ukraine’s 24TV and the Pravda news outlet had called Ho Chi Minh a dictator who killed millions for his “Bolshevik ambition.”

Tifosi’s Facebook post also claimed these news outlets represented the official view of the Ukrainian government and suggested that the Ukrainian people’s fight against the Russian invasion was therefore not worthy of support.

The post led to a flood of angry comments attacking Ukrainians and the Ukrainian government on the official Facebook page of the Ukrainian Embassy in Vietnam, prompting the Embassy to publish an explanatory video a few days later.

In the video, charge d'affaires Nataliya Zhynkina pointed out that the opinion pieces published by Ukraine 24TV and Pravda in 2014 and 2017, respectively, were in no way associated with the Ukrainian government.

These op-eds have had little influence on the political discourse of the country as they attracted next to no attention, she pointed out. Also, she said, several public officials of the Ukrainian government had already criticized them.

Zhynkina called the allegations an outright “disinformation assault” on the healthy friendship between the two nations. 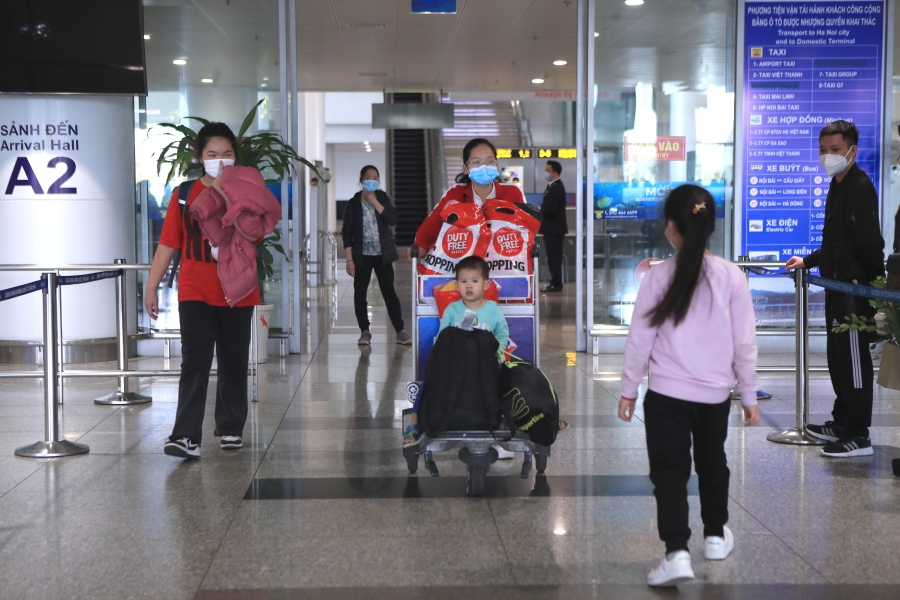 Vietnamese nationals arrive at the Hanoi airport after fleeing Ukraine on March 8, 2022.

However, the damage was done. YouTube videos, TikTok clips and Facebook posts repeating the false allegations have been viewed millions of times, influencing Vietnamese perceptions about the righteousness of the Ukrainian struggle against Russia.

The Vietnamese government has so far maintained an impartial position on the Ukraine war even as it begins to affect Vietnam’s economy.

According to Asian studies academic To Minh Son’s explanatory piece in The Diplomat, Vietnam’s historical affinity for Russia and the Soviet Union stems from both its dependence on Russian weapons and so-called “bamboo diplomacy” — a diplomatic approach that’s said to bend with the wind. That prevents Vietnam’s leadership from explicitly opposing the Russian invasion.

But there are also reasons to believe that the abstention of Vietnam in the March 2 United Nations General Assembly resolution deploring the Russian invasion isn’t necessarily a show of support for Russia. 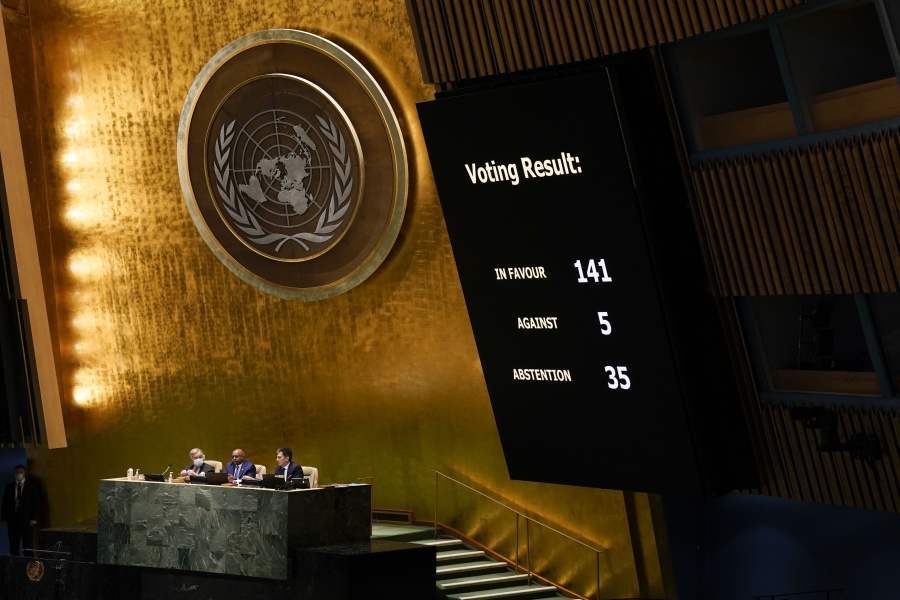 The results of a vote on a resolution concerning Ukraine are displayed during an emergency meeting of the General Assembly at United Nations headquarters on March 2, 2022.

The abstention revealed the Vietnamese government knows the dangers of overtly supporting Russia. But by refraining from voting, the outcome of the vote wasn’t affected, since the resolution had already secured overwhelming support and it didn’t require Vietnam to directly oppose Russia. Vietnam voted no in a later vote on suspending Russia’s membership in the UN’s Human Rights Council.

Ambassador Dang Hoang Giang, head of Vietnam’s Permanent Mission to the United Nations, has criticized Russia and the “obsolete doctrines of power politics, the ambition of domination and the imposition and the use of force in settling international disputes.”

He added Vietnam will support and contribute to UN humanitarian relief activities for Ukraine.

A friend to all

Vietnam is a nation with a longstanding diplomatic policy of “befriending every country.”

I’m a researcher who’s been actively monitoring social media content pertaining to Ukraine on legitimate Vietnamese sites and accounts. I find it puzzling that, despite government efforts to ensure online expression doesn’t negatively affect diplomatic ties between Vietnam and other countries, the anti-Ukraine disinformation campaign is still spreading like wildfire.

Several Facebook posts have been removed (possibly at the government’s request) that accused the Ukrainian government of being a neo-Nazi institution, mocked Ukraine’s “comedian” president and suggested Ukraine deserves to be annihilated for betraying Lenin. This type of content has appeared on genuine Vietnamese entertainment sites like TopVN, BeatVN and Theanh28 since the war started.

On Tiktok — the fastest growing social media platform in Vietnam — similarly offensive comments are easily found by searching terms such as Nga or Ucraina (Vietnamese for Russia and Ukraine respectively). Several TikTok videos have five to 10 million views and a half million likes, substantial key performance indicators for a country with a population of 90 million.

Misled by a seemingly concerted disinformation campaign, many Vietnamese netizens hail Vladimir Putin as “Putin the Great” and Vietnamese online forums are rife with hundreds of commenters professing complete admiration, trust and loyalty towards a political leader about whom they know very little.

After the International Court of Justice delivered its provisional order condemning Russia’s unfounded justifications for the Ukraine invasion, these same commenters denounced the court as a United States puppet.

After the United Nations Disarmament Affairs agency asserted that there was no sign of the existence of a Ukrainian bioweapons laboratory, they called the UN “the West’s biggest propaganda machine.”

When the UN suspended Russia from the Human Rights Council, they angrily mocked the legitimacy of the council, insisting that Russia had no need of this “agency of Western imperialism.”

As I watch this hostile and hawkish environment first-hand, it’s difficult for me to be convinced by the conclusions of some academics on the Fulcrum website, who argued after examining public posts on 100 Facebook pages that Vietnamese netizens generally oppose the war.

It’s unclear whether the Vietnamese government supports these disinformation campaigns, but it seems unlikely since these groups and accounts only complicate and damage the government’s diplomatic policies.

Vietnamese authorities are particularly effective in identifying unwanted internet content and taking it down. The fact that these Vietnamese “Putinistas” continue to thrive online indicates a certain degree of tolerance from the government.

But Vietnamese leadership would be wise to remember they’re intent on being part of the international legal order. 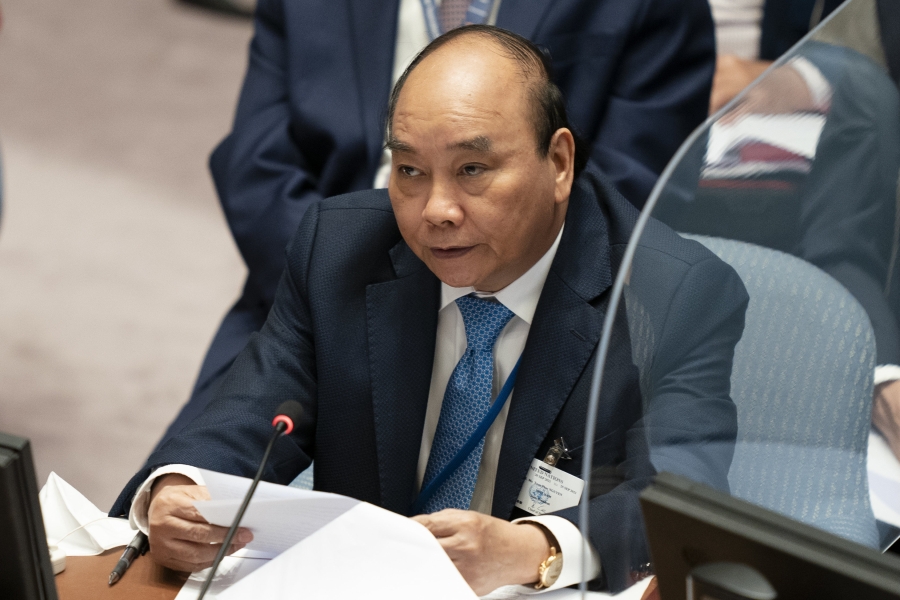 Nguyen Xuan Phuc, president of Vietnam, speaks during a meeting of the United Nations Security Council in September 2021.

The Vietnamese government is also lobbying its candidacy for the Human Rights Council — the very body that Vietnamese Putinistas recently condemned as “an agency of western imperialism.”

Online campaigns to discredit and constantly attack the legitimacy of international organizations appears dangerously at odds with the aims of the Vietnamese leadership.

Quoc Tan Trung Nguyen is a PhD candidate in public international law at the University of Victoria. This article is republished from The Conversation, a nonprofit, independent news organization dedicated to unlocking the knowledge of experts for the public good.