Kids as young as 4 compete to build castells, or human towers, a centuries-old tradition tied to Catalan identity.

A human tower rising higher than 26 feet swung perilously as 7-year-old Mar Mollà reached its top amid cheers from the crowd.

“The views were great,” she said later. “I could see all the colors and the arena vibrating.”

Last weekend, the town of Tarragona, in Spain’s northeastern region of Catalonia, hosted a massive tournament featuring the finest teams of human tower builders, or castellers.

Because of the coronavirus pandemic, four years had passed since the last time the competition was held there. 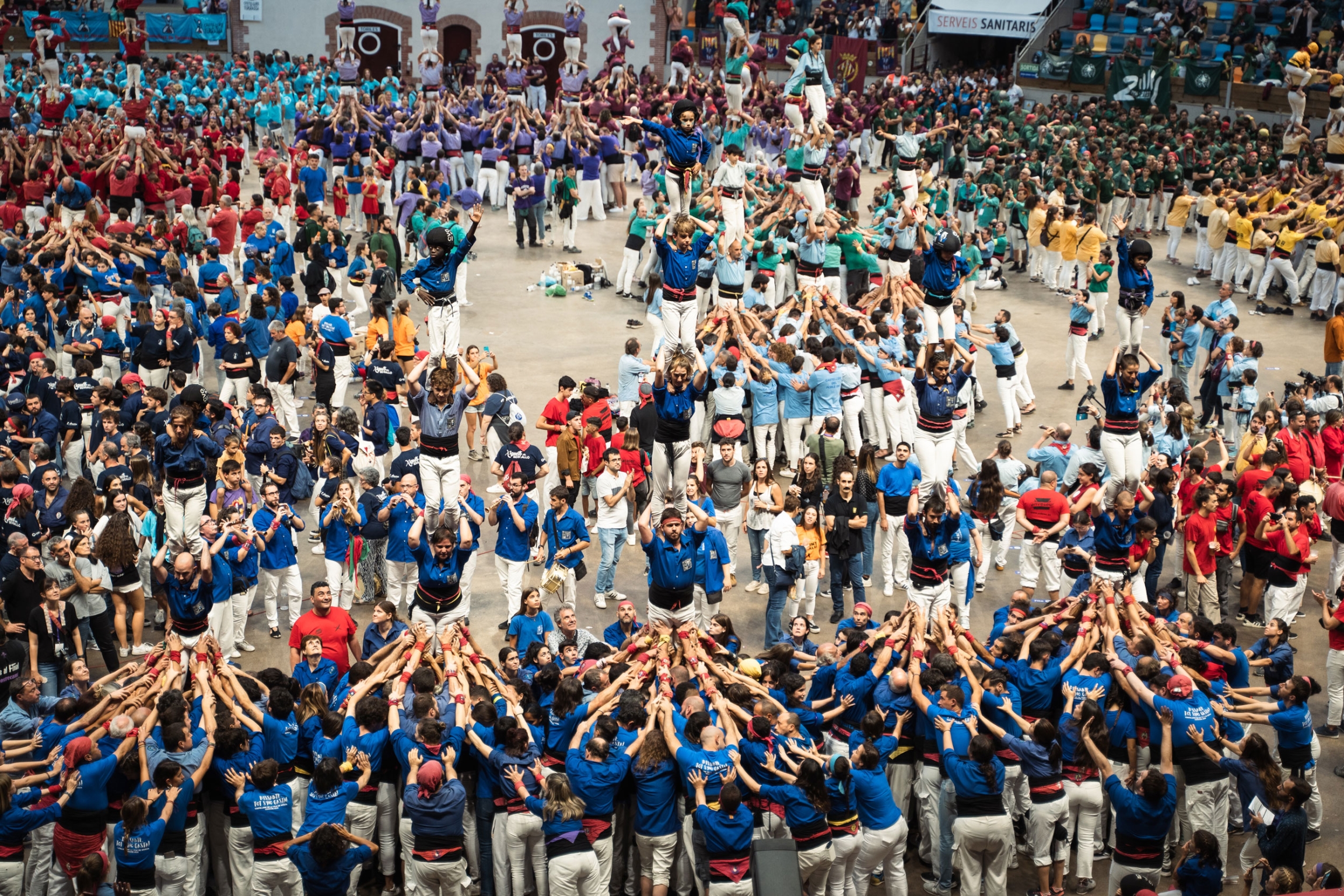 Castellers de la Vila de Gràcia team competes in a massive human tower competition after a four-year hiatus due to the coronavirus pandemic.

One of the teams competing on Saturday was the Castellers de la Vila de Gràcia. Mar Mollà was one its youngest members. She also had one of the most difficult tasks.

As she made her way up to the top of the castell on Saturday, her father, Daniel Mollà, watched nervously.

“I was worried,” he explained, minutes later. “But it’s up to her; she’s the one who knows if [the castell] will fall or not.” 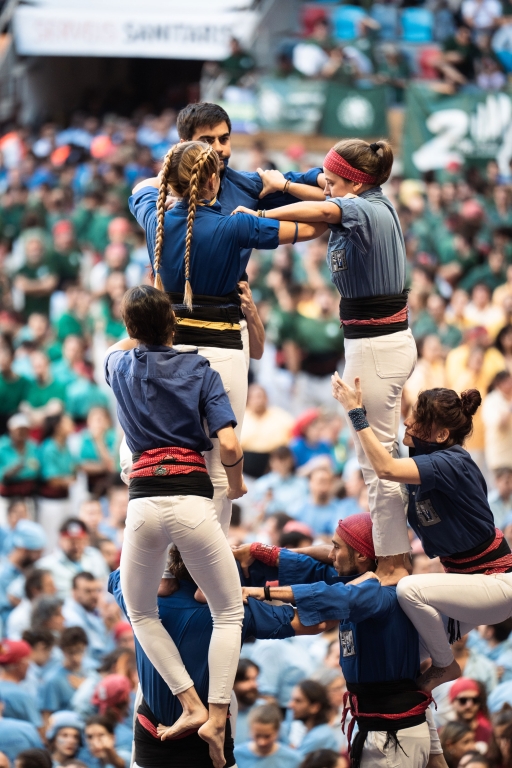 To build a castell, dozens of people must stand at the base pressed against each other to provide stability, and, if things go wrong, a safety net. Others venture upward, climbing and being climbed over; forming one tier, and then another, and another. Finally, a kid crowns the human tower by raising a hand.

Human towers are graded according to their height and difficulty. To get the full score, crowning the castell is not enough — it must be dismantled without collapsing.

While falls are rare, they do occur, and kids wear helmets to avoid severe injuries.

After one castell by Barcelona’s Colla Jove team crumbled on Saturday, a man laid on the floor, blood spilling from his head, as health professionals tried to place him on a stretcher.

One of his colleagues, Vanessa Matas, said: “You feel sad, and worried, and hope that nobody gets injured.” Then, she added, you do it again.

Human towers are a centuries-old tradition in Catalonia, and are widely seen as a symbol of its own distinct culture and nationalist aspirations.

The history of castells started in the region of Tarragona more than 200 years ago.

“The oldest reference to castells dates back to 1791, to a local festival in the town of Valls,” historian Àlex Cervelló said.

Human towers are thought to be a spin-off of a religious dance that featured acrobatic constructions known as Ball de Valencians.

According to Cervelló, participants might have competed against each other, building higher and more complex structures, until castells became a separate tradition.

Throughout the 19th century, castells expanded from the Tarragona region to the rest of Catalonia.

Following the Spanish Civil War in the 1930s, the Francisco Franco dictatorship tried to deprive castells of any hint of Catalan nationalism, Cervelló said, as part of its persecution of political dissidence.

In the 1980s, shortly after Franco’s death, teams of castellers began incorporating women, making it possible to build towers of unprecedented height, and kickstarting a golden era.

In 2010, the UNESCO recognized castells as Intangible Cultural Heritage of Humanity. 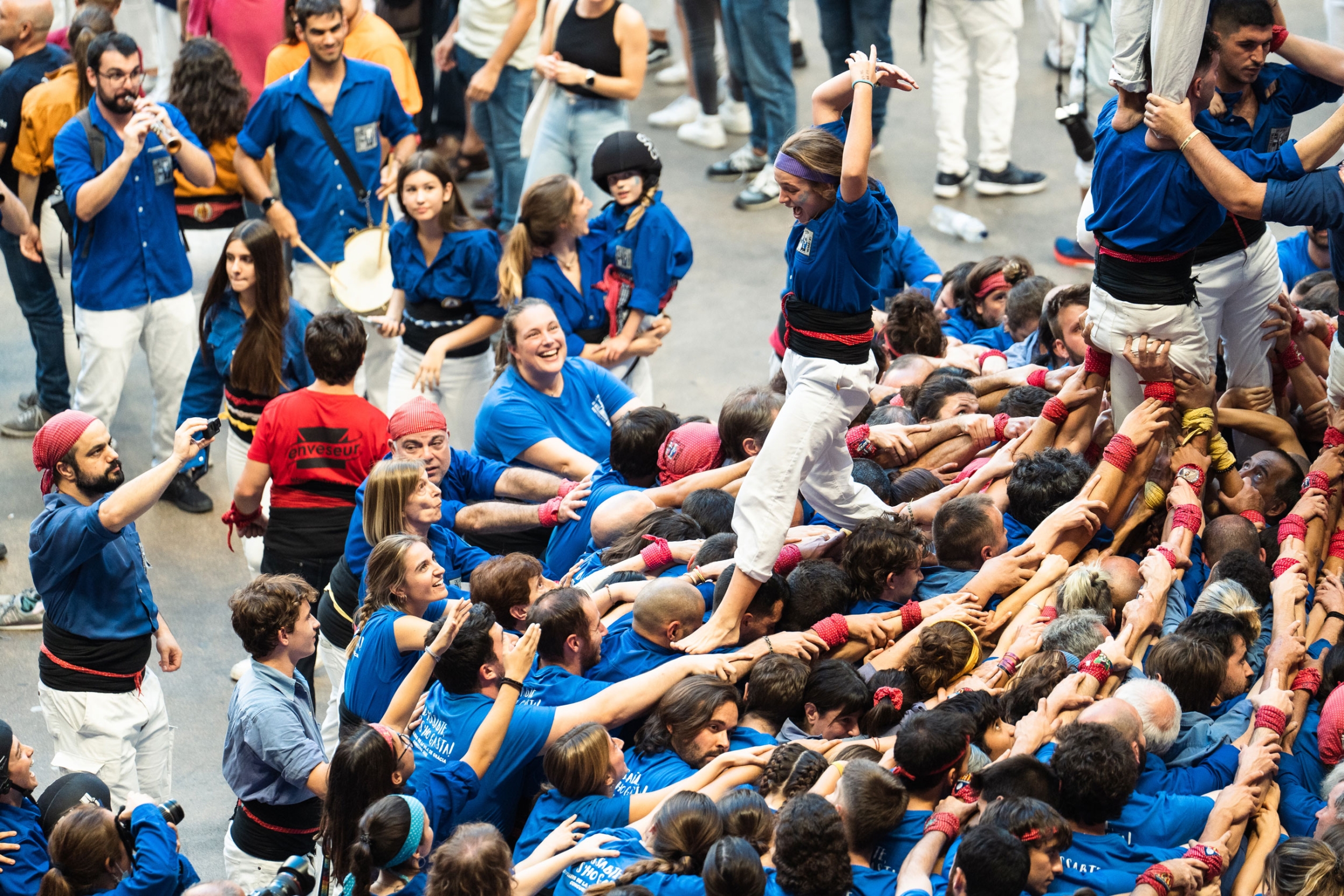 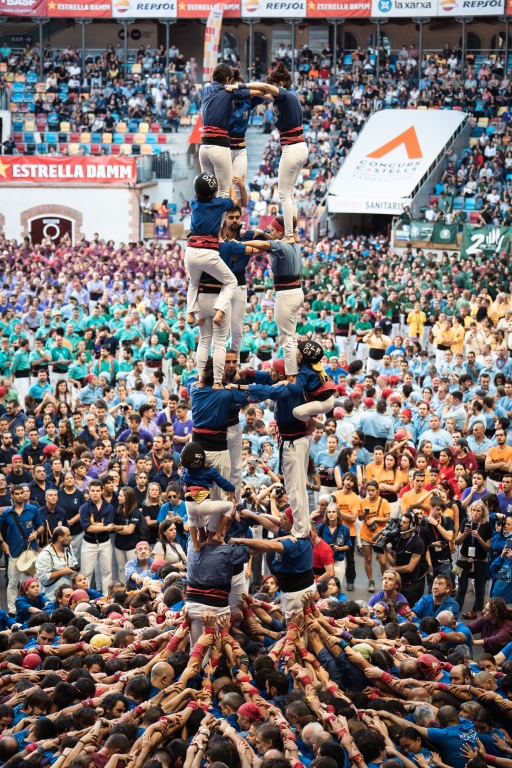 Castellers de la Vila de Gràcia team competes in a human tower competition, with towers reaching up more than 26 feet in the air.

After the Castellers de la Vila de Gràcia crowned their most challenging castell on Saturday, the head of the team, Eduard Cecília, instructed his colleagues to stay focused.

The crowd began to celebrate as they dismantled the castell, tier after tier, but Cecília insisted: “Keep calm! Keep calm!”

At the end of the day, the team won the Saturday contest, and ended up coming in eighth in the final ranking.

The best teams competed on Sunday, with the Castellers de Vilafranca taking the top spot, followed by the Colla Joves Xiquets de Valls.

Júlia Pozo, who looks after the youngest members of the Castellers de la Vila de Gràcia, praised the bravery of Mollà and other kids climbing to the top of castells.

Ultimately, she said, they’re the ones who decide whether a castell is crowned.

“If they are afraid and don’t want to climb, they let us know, and we either try to find someone else, or we dismantle it,” Pozo said.

But some, she said, will venture upward even if they are afraid, pulled by their “casteller spirit.”

« The cheating scandal rocking the chess world (Previous Post)
(Next Post) ‘You continue to live’: Some people step up to help Ukrainians cope with the trauma of war »