Six years after ICE revealed a university was a sting operation, the students caught in the middle say they still haven’t fully recovered.

A US Immigration and Customs Enforcement (ICE) officer watches during an operation in Escondido, California, July 8, 2019.

When Monica Zheng came to the US from China in 2011 to study journalism, she had high hopes for a new life in the country.

Instead, for years now, she’s been mired in legal proceedings. She’s one of hundreds of foreign students who banded together in a lawsuit after they learned that the New Jersey university that they attended was fake — set up by Immigration and Customs Enforcement as part of a sting operation.

Last week, Zheng and hundreds of former students reached a settlement agreement in their class-action lawsuit against the government in a federal court in New Jersey.

Zheng, who eventually obtained a green card and is now working in the tech industry in Texas, said that the settlement isn’t enough to make up for the disruption to her life and career that resulted from the ICE sting operation.

Monica Zheng, former student of the sham ICE university who is part of the class-action lawsuit against the US government

Under the settlement’s terms, the government will pay over $450,000 in legal fees but isn’t admitting to any wrongdoing.

There isn’t any financial compensation for the former students, but they will be able to receive expedited processing of new visa applications, have their immigration records wiped clean of fraud accusations, and be able to reenter the United States if they leave the country.

After two years at college, Zheng graduated, but she was still on a student visa, which only allowed her to stay in the United States for one more year.

She found a job in information technology in Texas, and her employer wanted her to keep working for them.

Related: Despite flurry of efforts to recruit immigrants with medical experience, many remain sidelined

Zheng had plans to go back to school to get a PhD, but wanted to make some more money before then.

So, Zheng did what many students do — she enrolled in a master’s program that allowed her to get credit for working, also known as curriculum practical training.

That way, Zheng would be able to get another student visa, and earn money.

To get that visa, Zheng used a visa broker, who are often called on to help foreign students navigate these types of visas that are enmeshed in bureaucracy. It was through that broker that Zheng found out about the University of Northern New Jersey.

Zheng checked out the university and did her usual due diligence: “I called the person and then I checked multiple times because I’m a very cautious person,” Zheng said. “So, I check everywhere. I double-check on the DHS website, I check everywhere, and everything seemed legit. Even my employer checked and saw it was authorized.”

Zheng attended the school for a few months and then switched to a different graduate program at another university, one that she attended in person, where she could study information technology.

At the University of Northern New Jersey, she was only doing curricular practical training, which gave her school credit for working. After leaving UNNJ, she thought nothing was suspicious about her experience — thousands of other students use similar arrangements each year.

Then, one day in April 2016, two years after she had left UNNJ, Zheng received a letter from the US Citizenship and Immigration Services informing her that her visa had been canceled. It said that she had committed fraud, but gave her no further information.

“It [felt] horrible. I am pretty sure I had a panic attack when I opened the letter.”

Monica Zheng, former student of the sham ICE university who is part of the class-action lawsuit against the US government

“It [felt] horrible,” she said. “I am pretty sure I had a panic attack when I opened the letter.”

Zheng was bewildered. She sought help from the international office at her then-school in Texas, where she was getting a doctorate. The office pulled up an article from The New York Times, with the headline: “New Jersey University Was Fake, but Visa Fraud Arrests Are Real.”

Immigration and Customs Enforcement had been running UNNJ for three years, as a front for a sting operation against visa brokers. Zheng and over a thousand other students, had “attended” the fake university, almost all of them doing curricular practical training without having any idea that the school wasn’t real.

Seeing the article, Zheng realized that there were other people in the same position that she was, many of them Chinese nationals, and she began reaching out to them. Soon, they came together on the lawsuit in the hopes that they get their visas restored. That was in 2016.

Elizabeth Montano, an attorney for the students from the Miami-based firm Kurzban Kurzban Tetzeli & Pratt, said in the New Jersey Monitor that the government did not provide any information about how many foreign nationals are still in the country and how many went back to their home countries.

The 100 people whom she’s been in touch with about the settlement live near New Jersey, according to Montano.

A case of ‘gross overreach’

The US Immigration and Customs Enforcement agency set up the fake university in New Jersey as a part of a sting operation to crack down on brokers who were taking kickbacks from schools. In total, 22 visa brokers were arrested. 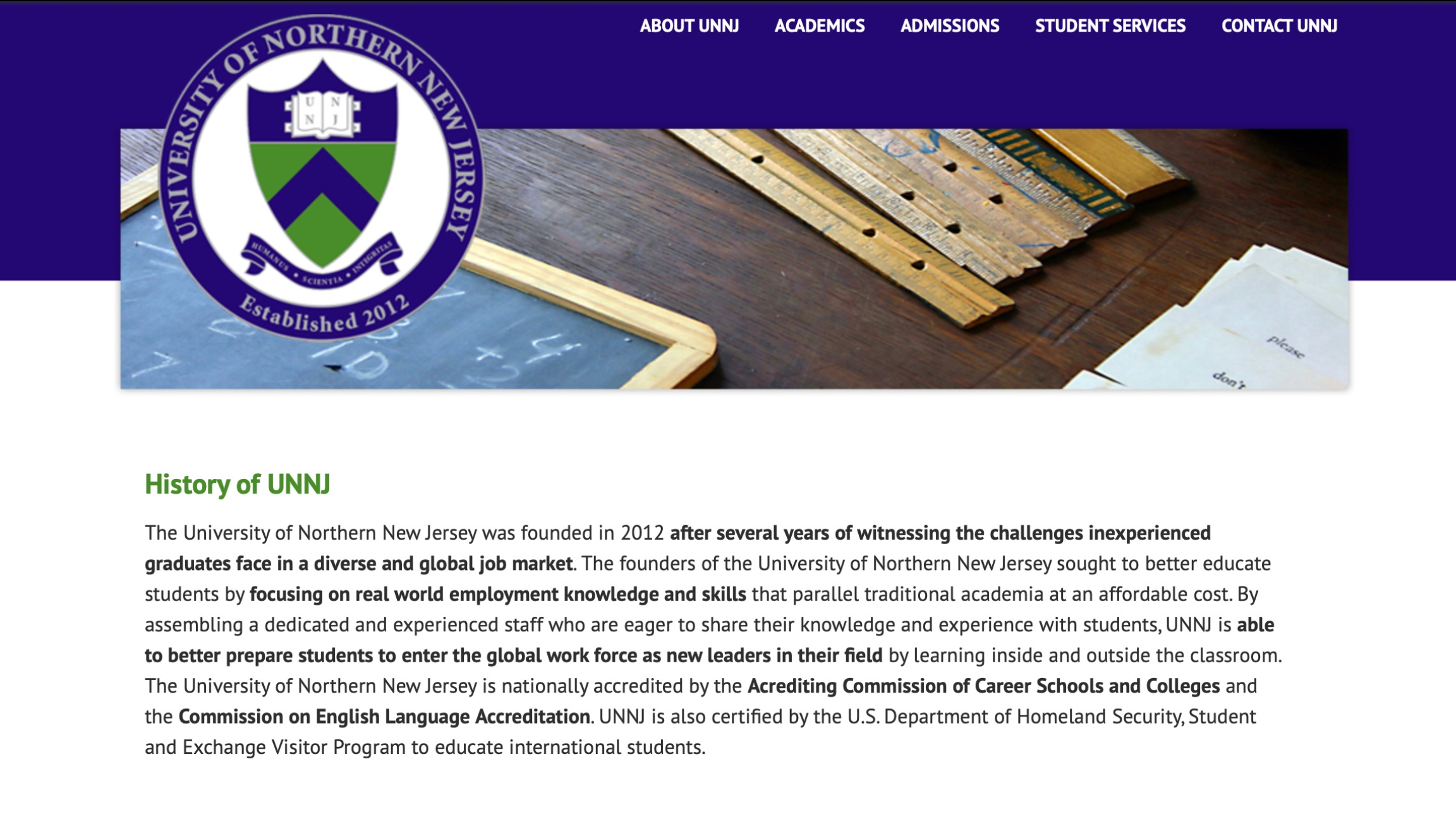 A screenshot from the fake school, University of Northern New Jersey, or UNNJ, set up by Immigration and Customs Enforcement as part of a sting operation. The school has been shut down and the website is archived.

Screenshot from the archived site for UNNJ

ICE also ran a similar operation in Michigan, which led to the arrests of 161 students and the deportation of 600 people.

ICE shut down UNNJ in 2016 after the academic brokers were arrested for fraud, and immediately terminated all related student F-1 visas based on “fraudulent enrollment,” the suit states.

The civil lawsuit bounced around the federal courts system for years as the students argued they had been unfairly targeted by the government.

At one point, an appeals court castigated the government, saying it went to great lengths to create this fake university — with a campus, logo and ICE agents posing as school officials.

He represents a group of these foreign students, including Zheng, who sued the government.

“[The government] had no basis to do that. They hadn’t interviewed or even spoken to any of those students.”

Ira Kurzban , attorney for the students

“[The government] had no basis to do that. They hadn’t interviewed or even spoken to any of those students.”

On top of that, ICE’s fake university seemed so real, that even a judge noted “that the only thing left out was their rankings in the NCAA [National Collegiate Athletic Association],” Kurzban recalled.

Today, the website for UNNJ is still archived on the internet, showing smiling faces of students and proclaiming that the university offered “the highest quality of undergraduate and graduate education for students throughout New Jersey, the United States, and the world.”

A screenshot from Google Street View of the University of Northern New Jersey's main campus and admissions at 25 Commerce Drive, Cranford, New Jersey 07016.

The World asked ICE for a response but the agency said it doesn’t comment on litigation proceedings or outcomes. An ICE spokesperson said it was tasked with enforcing all immigration laws, including those impacting student visas.

No clear pathway for foreign students

The hoops that many students and former students have to jump through to stay in the United States has made situations like the UNNJ sting possible, explained Jill Welch, with the Presidents’ Alliance on Higher Education and Immigration, an advocacy group of university leaders.

“International students are very closely monitored and regulated and they’re very limited in what they can do workwise while in the United States,” Welch said.

She said that she believes that the fact that students educated in the United States can’t then easily get work permits doesn’t make much sense as a policy goal.

“You think when someone gets a full degree here, they can stay and contribute their skills and talents in the US economy, but there’s no direct path to do that,” Welch said.

Other countries, like Canada, have a clear path for foreign students to then join its workforce, she said.