Many Syrian families in Turkey face school enrollment challenges due to a Turkish law that says no more than 30% of schoolchildren in a single class can be foreigners. Families in border cities like Gaziantep say their children are being turned away with few alternatives.

Syrian children who are refugees in Turkey face many barriers to learning.

Warda Haydar was trying to enroll her daughter, Baylasan, for the fifth grade in a Turkish school, when the principal told her it would be impossible.

He told the mother of two from Damascus, Syria, that the school already had “too many” foreign students.

“We begged him,” Haydar said. “My husband went to the school manager every day.”

The Haydar family’s school enrollment challenge stems from a Turkish law that says no more than 30% of schoolchildren in a single class can be foreigners.

Baylasan’s school is in Gaziantep, a Turkish city near the Syrian border, with a particularly high number of Syrian residents. According to the headmaster, this particular school already had too many non-Turkish students.

Even though Baylasan had studied here for three years, she would now have to be bussed to a different school, in a neighborhood on the other side of town.

Haydar said that the long commute means her daughter returns well past 7 p.m. The bus drops her off in a neighborhood that her mother fears is unsafe for a 10 year old, alone, after dark. The school was supposed to provide free transportation, she said, but the bus driver soon started charging hundreds of liras per child — about a quarter of an average rent payment. He relented after parents protested, but the situation remains uncertain. 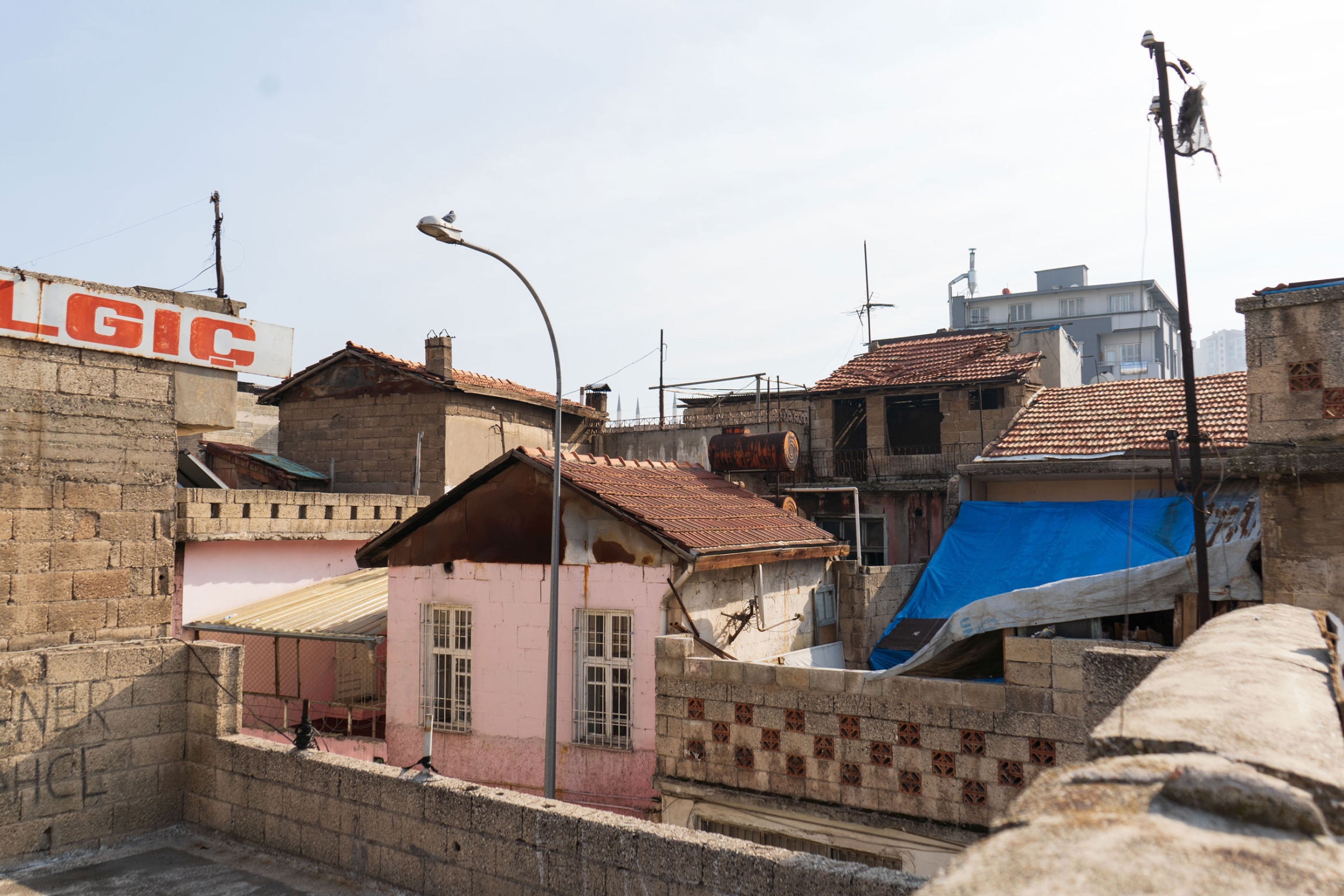 Kids Rainbow is located in one of Gaziantep’s poorest neighborhoods, where many kids get pulled out of school to help their families.

As the Syrian civil war enters its 13th year, more than half of the country’s population remains displaced. About 3.5 million Syrians have sought shelter in neighboring Turkey, which continues to struggle to accommodate them. About a third of Syrian children living in Turkey are not currently attending school, according to UNICEF.

After an initial warm welcome to Syrian refugees, Turks slowly realized that the West would not accept large numbers of refugees from Syria, and ublic opinion soured toward new arrivals.

Current government policies discourage Syrians from prolonged stays in Turkey. And bureaucratic hurdles make it difficult for Syrian families to attend schools, visit hospitals, or even travel without permission beyond the borders of provinces in which they are registered. 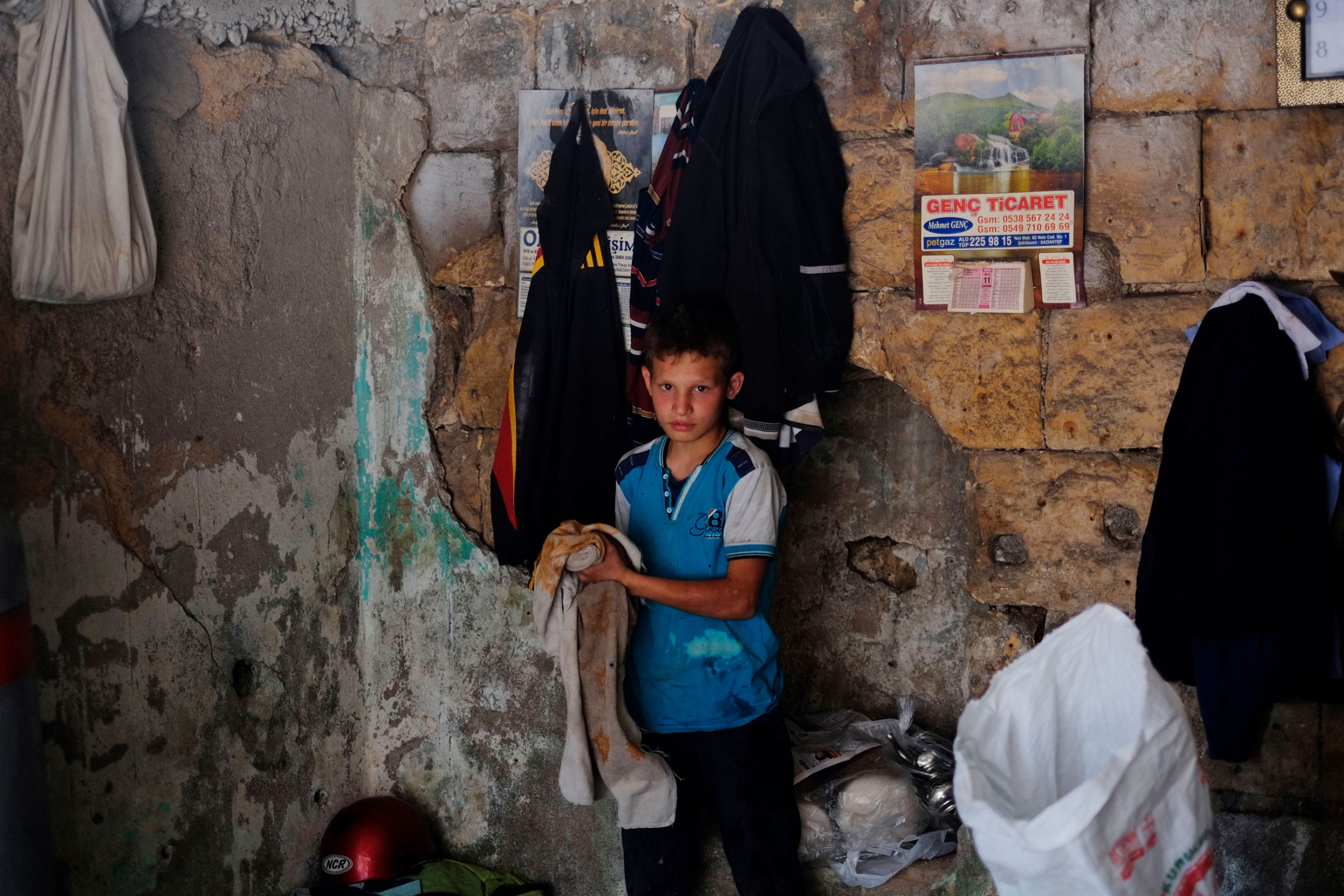 In this Thursday, June 2, 2016, photo, a Syrian refugee child works at a copper workshop in Gaziantep, southeastern Turkey.

Not every school enforces the 30% rule, but Türk Eğitim-Sen, a Turkish teacher’s union, has advocated for more schools to do so.

“If there are more than 30% of foreign students, it causes issues with a language barrier for both the teachers and the class,” said Bekir Avan, the head of Türk Eğitim-Sen’s Gaziantep branch.

In a survey last year, his organization found that out of 1,352 schools in the Gaziantep area, fewer than 40 schools enrolled a student body consisting of more than 30% of foreign students. But within those schools, as many as 80% of students in some classes are refugees.

“We have to consider the right to education for all students. The Turkish students and foreign students,” Avan said. “We’re very sensitive to this.”

At a community center called Kid Rainbow in Gaziantep, Syrian kids take a variety of classes held in a mix of Arabic, English and Turkish. Their learning programs are designed to help them better integrate into Turkish schools while still maintaining their mother tongue. 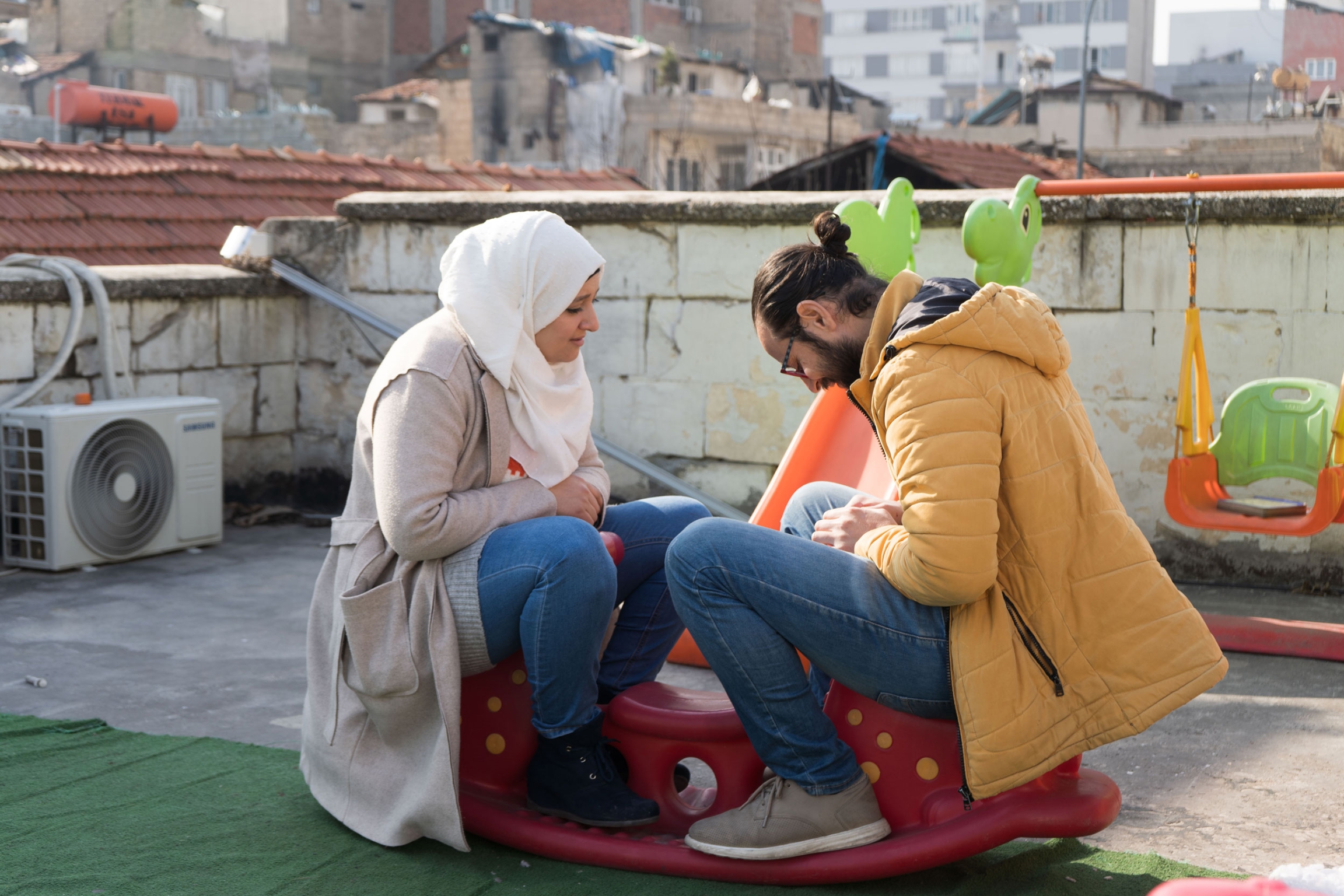 Syrian filmmaker Mustafa Kara Ali and Hibah Jahjah, his wife, took over Kids Rainbow from a friend in 2020

Syrian filmmaker Mustafa Kara Ali and Hibah Jahjah, his wife, took over Kids Rainbow from a friend in 2020. They reestablished the project in one of Gaziantep’s poorest neighborhoods and run it entirely on international donations.

“We saw so many children out of school. Selling flowers, cleaning cars on the street,” Kara Ali said. “We’re not a school, just a safe place for children to play, do some activities.” 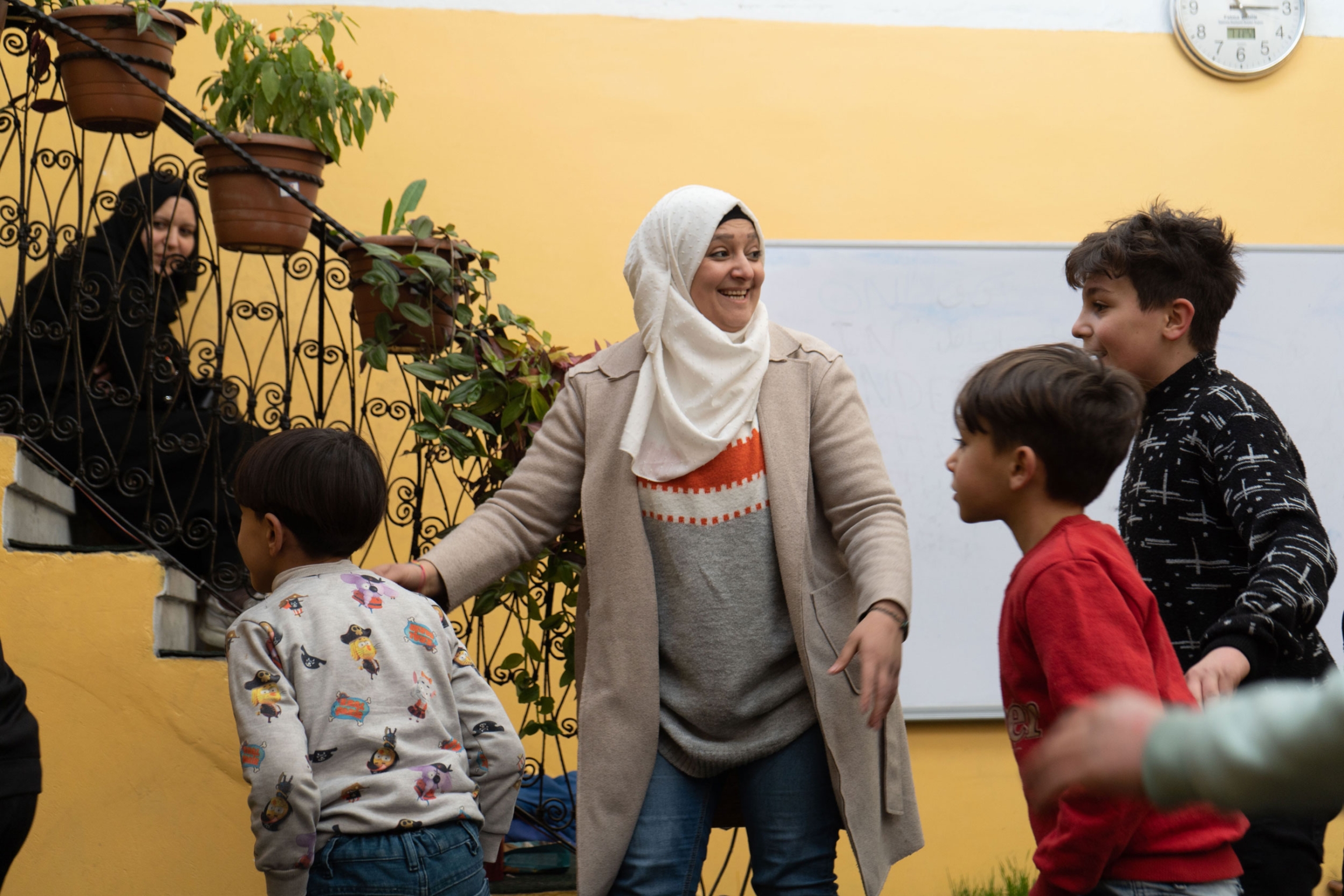 The program quickly grew beyond capacity, requiring a new building. Of the 120 students who regularly attend Kids Rainbow, a third are not attending school. Another 100 students, Kara Ali said, are on a waiting list.

After speaking to parents, Jahjah realized that many Syrian children were dropping out of school because their families’ residence permits are tied to another province, effectively barring them from local schools in Gaziantep. Others were bullied in class, making going to school unbearable. Still others had their own behavioral issues — many had lost family members or had traumatic experiences during the war.

“They feel excluded, like they don’t fit in,” Jahjah said. “Often they lash out. And once your kid hits a Turkish kid – or even the opposite – Turkish teachers say they’re no longer welcome in class.” 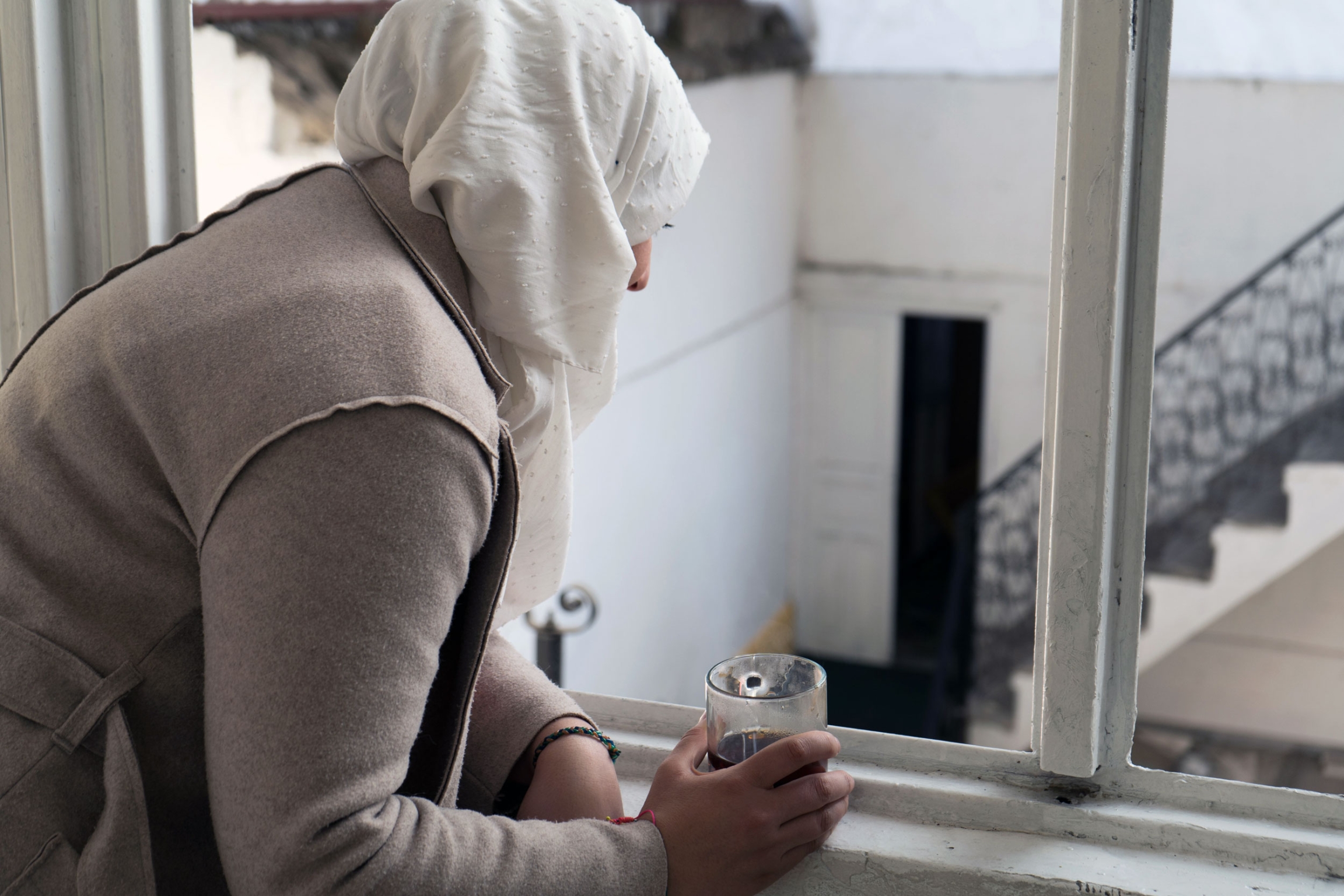 A few months ago, after nearby schools began to implement the 30% rule, Kids Rainbow received a rush of new students.

Jahjah said a lot of parents simply took their kids out entirely rather than have them bussed to other schools. Dozens of new students came to Kids Rainbow as an alternative, straining its capacity as a small nonprofit.

Projects like Kids Rainbow are a band-aid, not a solution, Jahjah said.

“We can’t give them any kind of certificate that they graduated,” she said. “All we can do is support them, and teach them, and try to make it a little easier.” 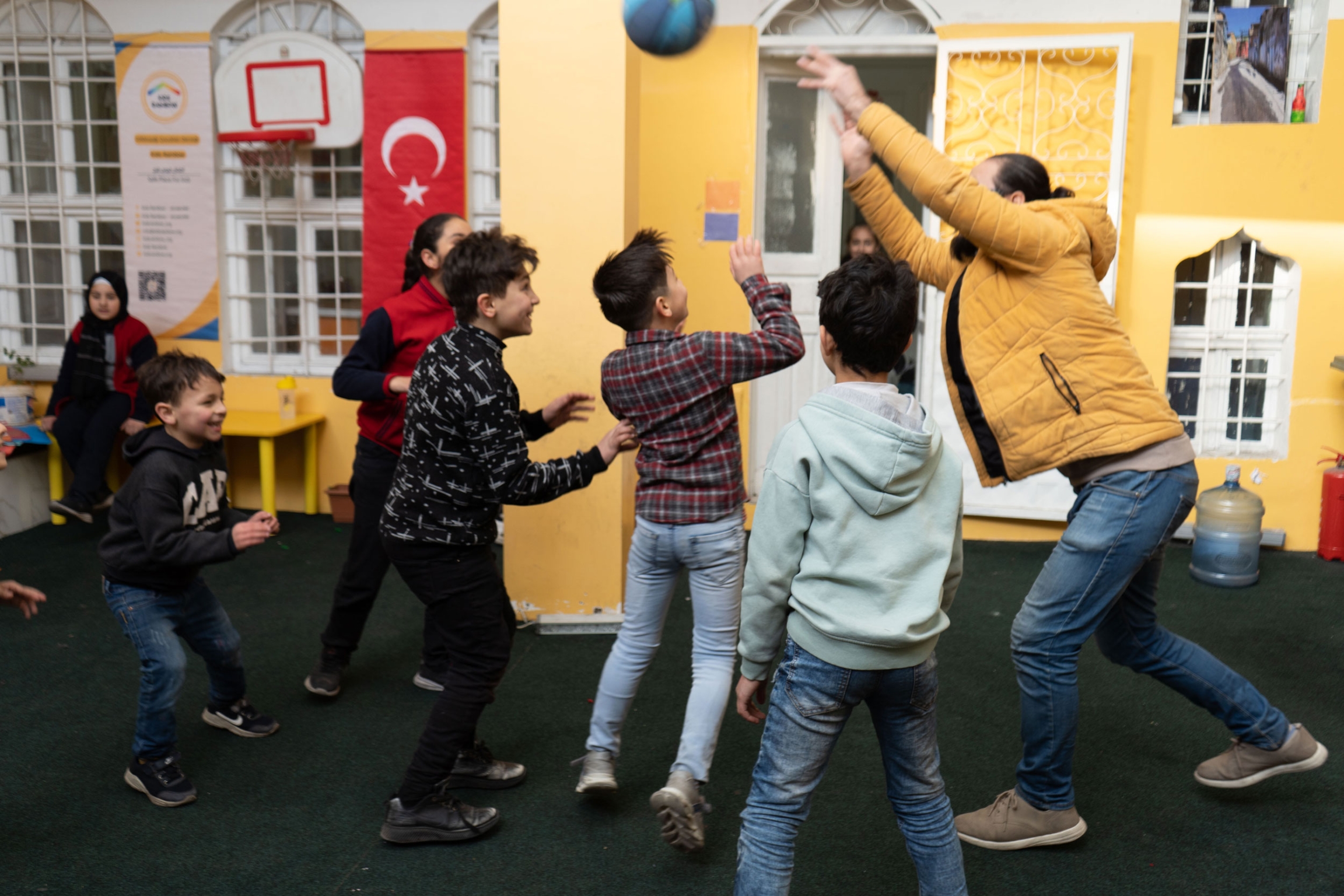 Despite the hurdles, many of the students have enthusiastic ideas about their futures — to become a math teacher, a professional soccer player or a newscaster.

Before afternoon classes, Jahjah leads the kids in a group game of “keep away,” with a rubber ball. Some stand off to the side, a bit wary. But eventually, everyone gets involved.

Her goal for Kids Rainbow is to be a place where kids feel safe, and wanted. And in that, she’s surely succeeded. 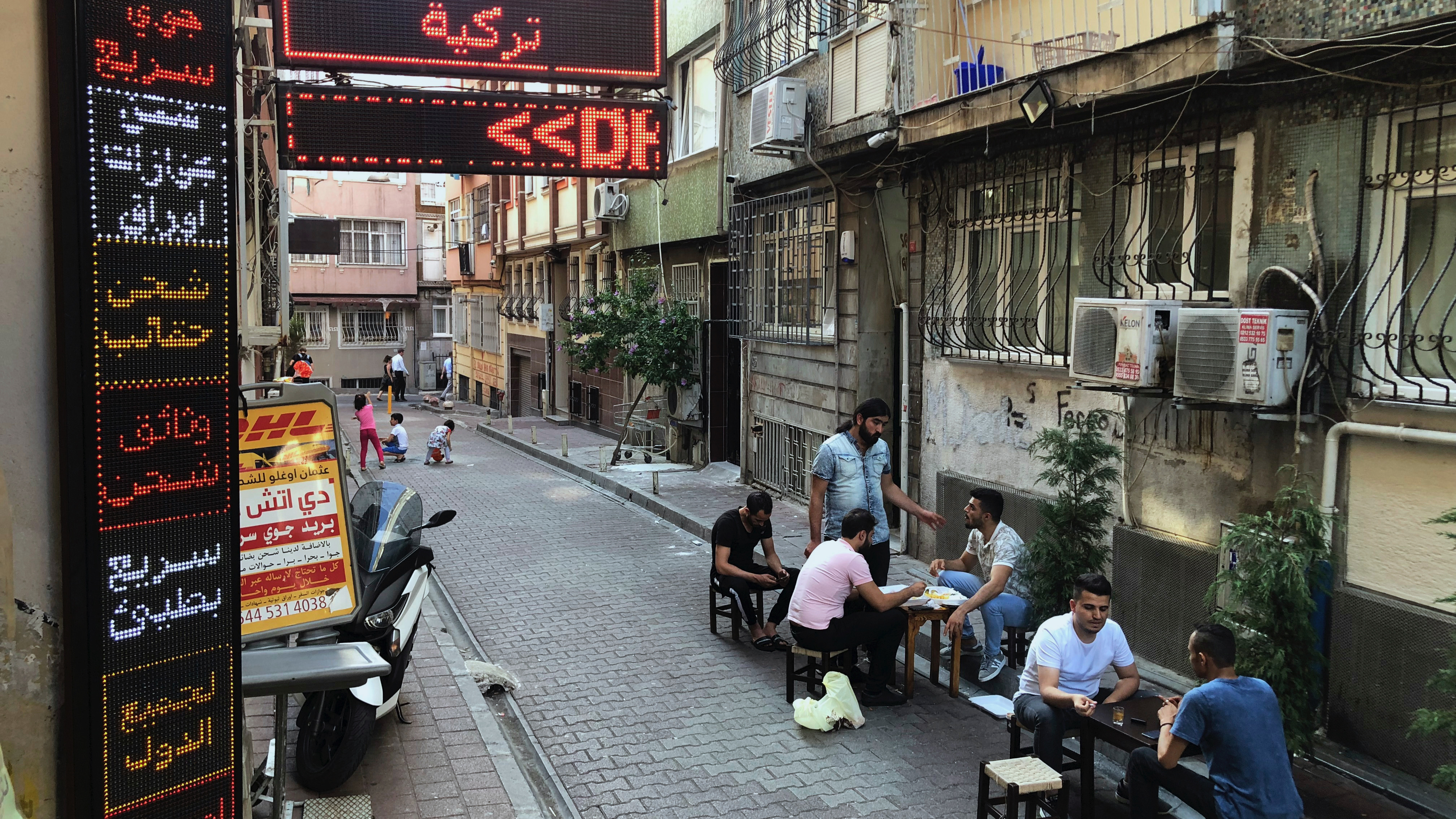 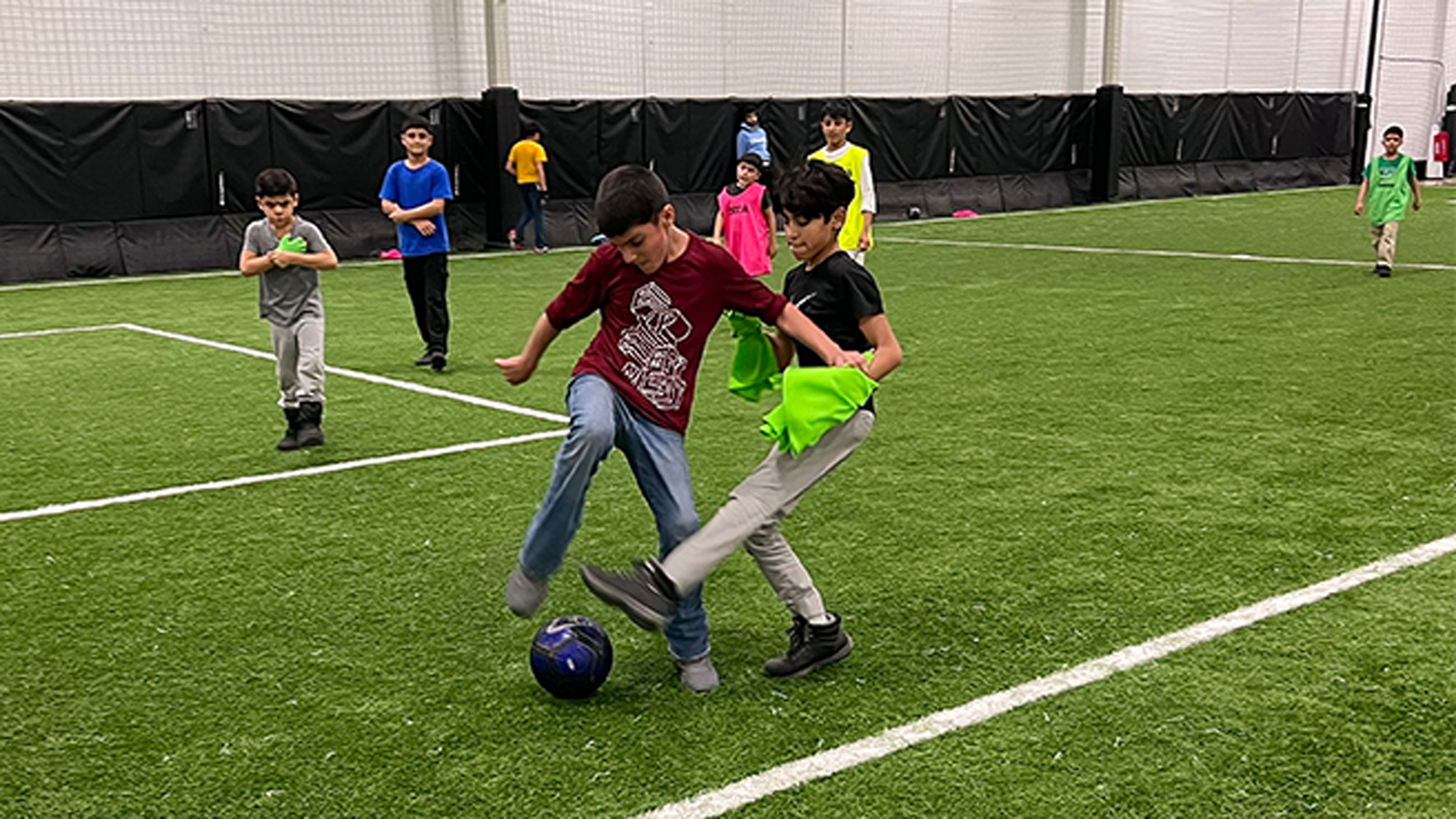 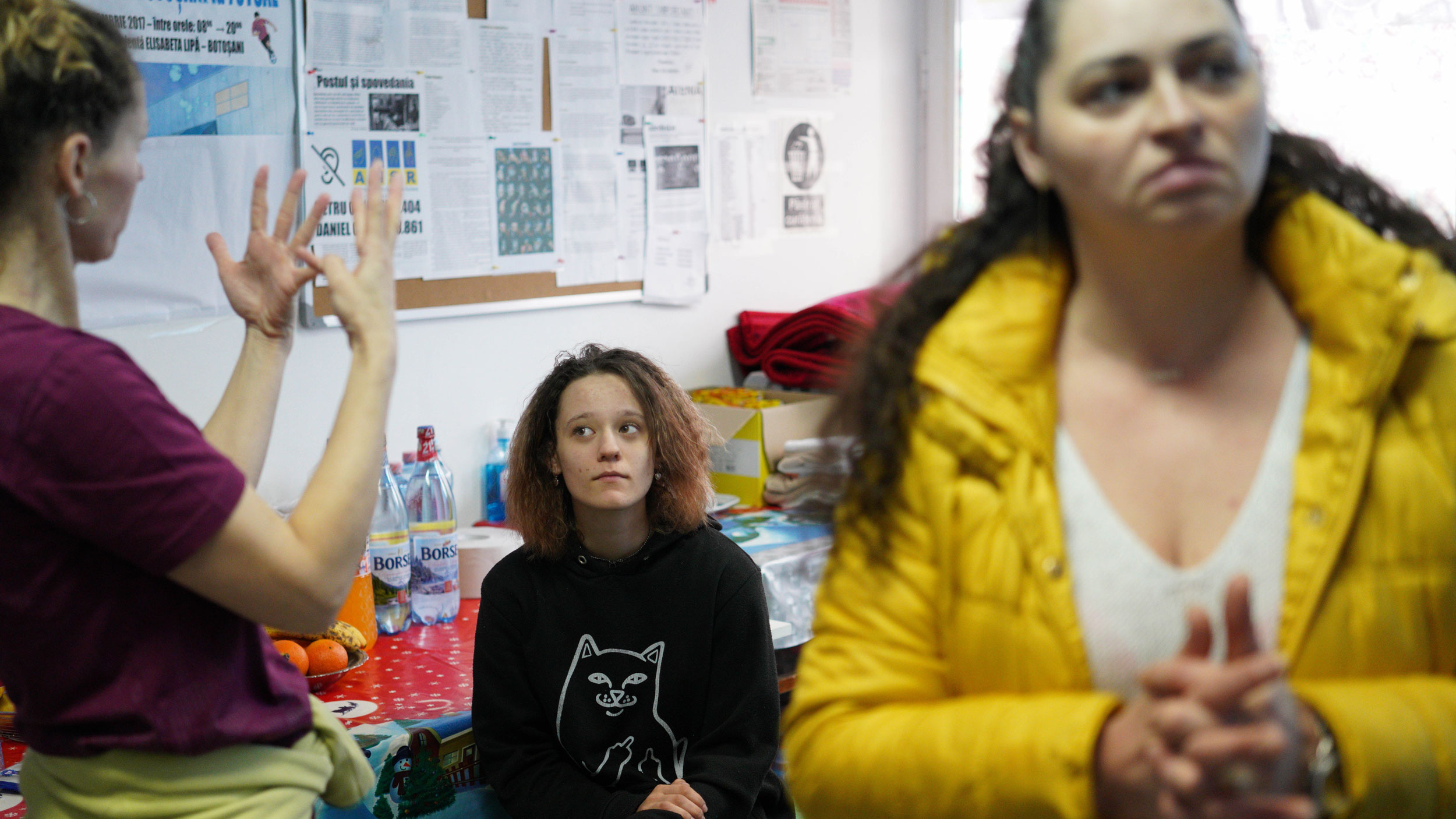 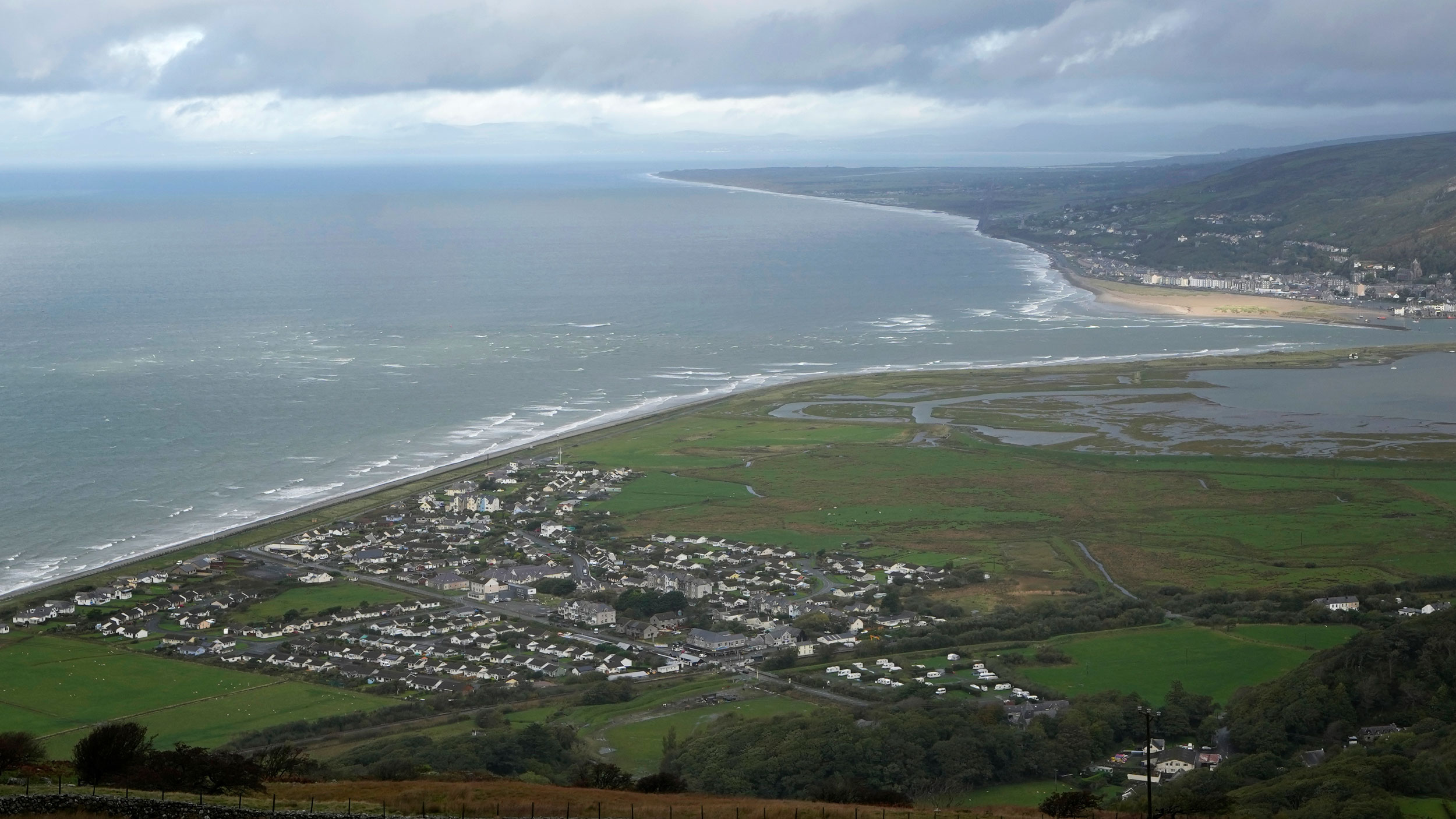 Climate change may be the leading driver of tomorrow's refugee crisis

« Random rules: Part II (Previous Post)
(Next Post) Court orders Canada to take back its citizens from camps in Syria »