Latvia's government is capping the heat in health facilities and other buildings to about 65 degrees Fahrenheit in an attempt to keep some heat flowing during the cold winter months while lessening its dependency on Russian energy.

Traditional firewood and pressed sawdust bricks used to be a cheap way to heat your home in Latvia. But with inflation and soaring demand, wood heat has tripled in cost so far this year — and winter hasn't yet begun.

On a chilly October morning outside the main hospital in the capital Riga, an elderly woman, wrapped in a shawl, sold wool socks to people heading inside.

“Have a look,” she said. “Dig around in the pile for the warmer ones.”

Extra wool clothing for the cold — indoors. That makes sense for Latvia right now, because the government has capped heat in health facilities at about 65 degrees Fahrenheit.

Latvia is among several European countries scrambling to find ways to stay warm this winter without having to depend on Russian energy. Time is running especially short in the tiny northern Baltic States, where winter sets in early. So, residents there are bracing for the cold months ahead. 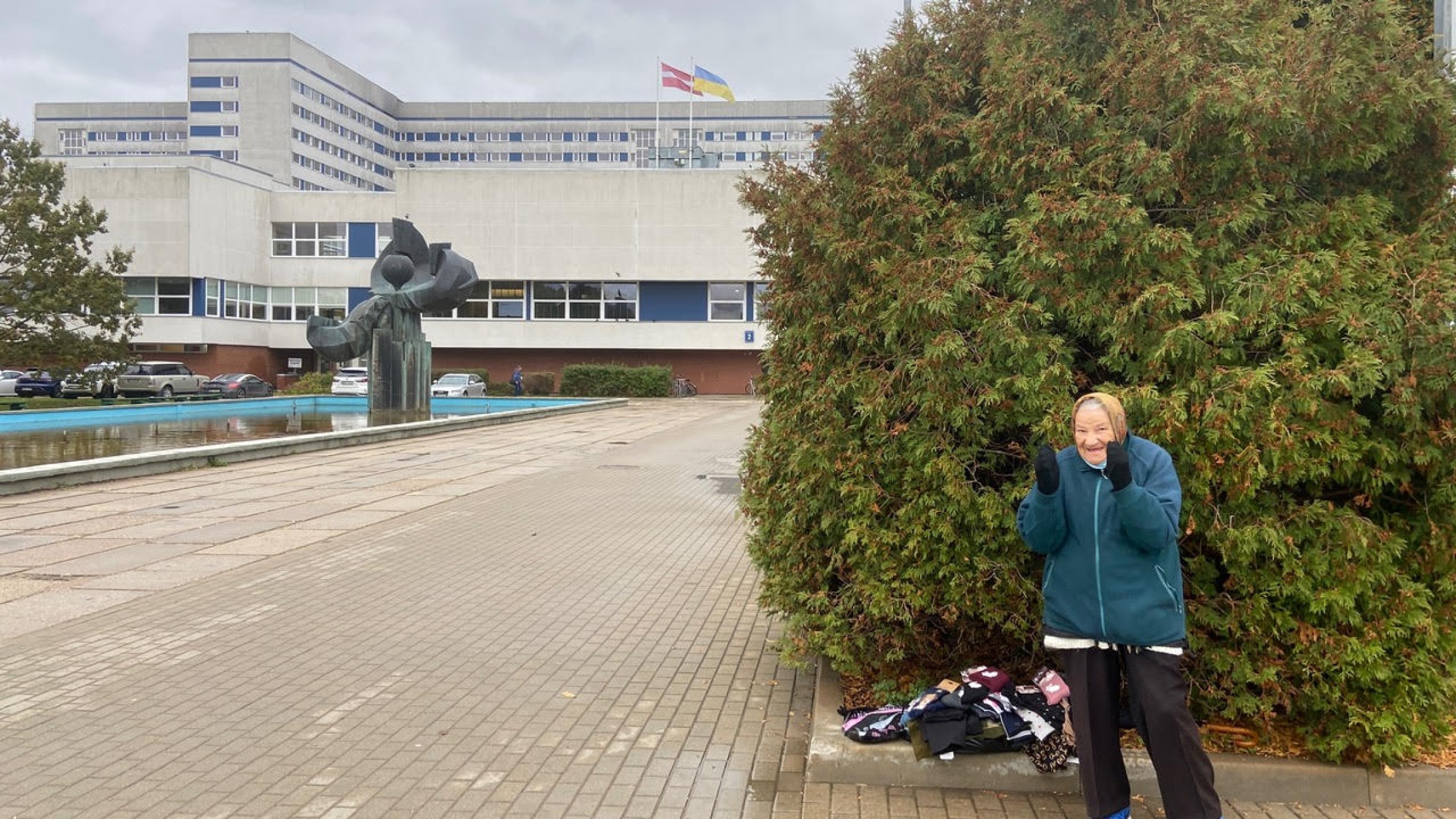 An elderly entrepreneur hawks socks near the entrance to Latvia's largest hospital. The socks could come in handy; to save on heating costs this winter, the hospital must keep temperatures below 65 degrees Fahrenheit.

School teacher Anastesia Buschkevah didn’t stop to purchase the wool socks on her way in to the hospital— but winter was on her mind.

Buschkeva has lymphoma. The hospital is scary enough, she said, without having to worry about staying warm. Winters in Latvia are long and harsh. Temperatures can stay below zero for weeks. The government’s austerity plan, in an attempt to maximize on savings, also applies to other public spaces — including schools and universities.

This winter, Latvia University’s natural sciences campus is closing down one of its two big buildings, keeping it just warm enough so the pipes won’t freeze over, professor Juris Paiders said.

“We now accept the lower standard for heating. You should use warm underwear, for example, like me,” he added, while opening a button on his dress shirt and tugging on his longjohns underneath.

But there are also bigger problems than having to stay warm, according to Samantha Dzvagula, an ungrad environmental science student. Closing half the campus means that half the laboratories are now off limits.

“I’m really sad and disappointed,” she said.  “We have a lot of laboratory work, like twice a week. We cannot do that.”

But Dzragula said she’s taking the situation in stride, especially when she thinks of all the suffering among Ukrainians as they defend themselves against Russia.

Russia is Latvia’s giant neighbor to the east, and it supplies the tiny nation with most of its electricity and natural gas. But like the rest of Europe, Latvia’s is trying to change that. One of the ways is by importing liquified natural gas through Estonia, and ramping up renewables. But the transition will take time. For Latvians, who number about 2 million people, this winter is likely to be tough.

On a recent evening, resident Evita Rozenfelde said that she’s worried about her next few utility bills, and keeping her children comfortable. 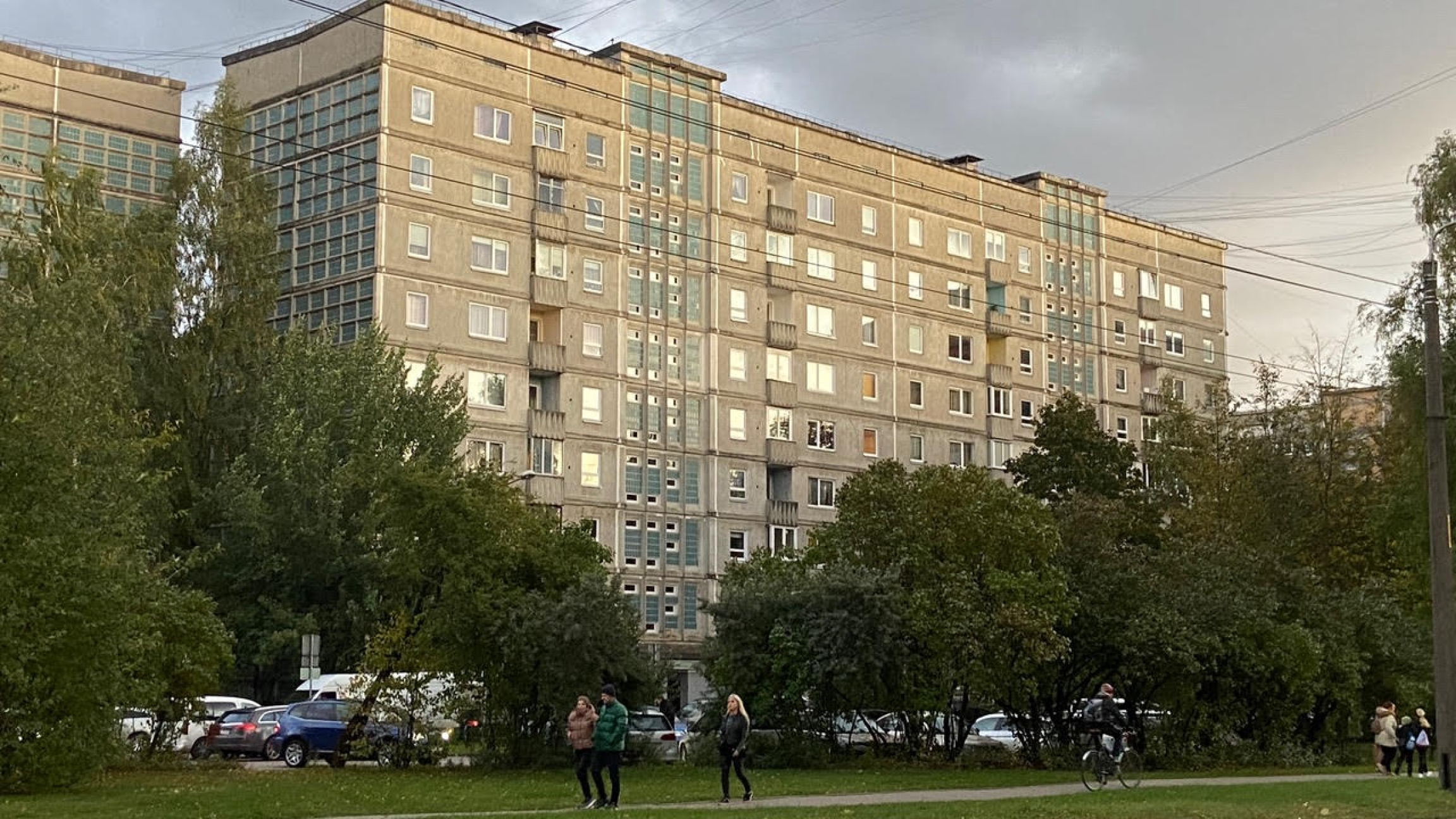 One of many so-called Khrushchev Ghetto buildings in Riga, Latvia. The Soviet-era apartment blocks were built cheap and meant to last just 50 years. They're badly insulated to boot, and more expensive to keep warm — which is bad for residents who are seeing their energy bills soar.

“I haven’t turned on the heat yet,” she said. “But when I do, the government won’t let me turn up the thermostat above 65 degrees.”

At another Khrushchev-era building, office worker Marika Šūtele said she and her husband are steeling themselves for the worst.

“As for our two teenage boys,” she joked, “they both play hockey. They’re used to ice. So, for them, the apartment won’t be so cold.”

Šūtele does worry, however, that the factory where her husband works might close down due to the high heating costs. The big question, she said, is what the government will do to help.

So far, authorities have announced some limited subsidies. It also said that it has enough natural gas reserves to get everyone through this winter — if people are careful with their usage. 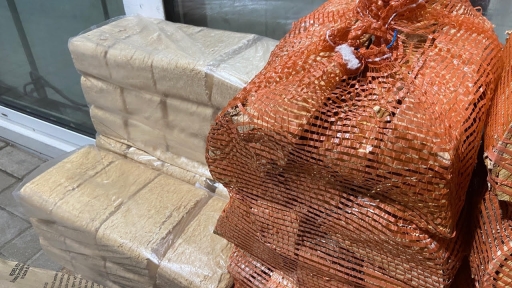 Stacks of traditional firewood and pressed sawdust bricks. They used to be a cheap way to heat your home in Latvia, but with inflation and soaring demand, wood heat has already tripled in cost so far this year.

With fuel prices already so high, many people are falling back and relying on firewood. Latvia is mostly made up of forest areas, and more than half of its homes are heated with wood, or by-products, such as compressed blocks made from sawdust. But another problem is that wood prices are also skyrocketing.

“One bag is six euros [about $6]. I’m not sure how anyone could afford it,” said interpreter Imants Liepinš, pointing out all kinds of wood products for heating at a store.

Keeping his house warm until May with sawdust blocks would run him about 3,600 euro, or roughly $3,500, more than three times what he would normally pay during the season.

Wood pellets, another popular fuel, have also shot up in price. At a Riga hardware store, a bag of pellets sells for $9.

“Well, if you need heat, you have to buy it,” office worker Artis Strautinš said. “There’s no choice.”

No choice but to pay more for less heating, as the country braces for a cold winter.

Related: The invasion in Ukraine could mean less reliance on energy from Russia, analyst says

« The Picasso paradox: Museums grapple with how to remember the artist’s complicated legacy (Previous Post)
(Next Post) 1 in 6 trees in the US threatened with extinction »