Partial revision. How the mobilized are saved from the mistakes of the military commissars 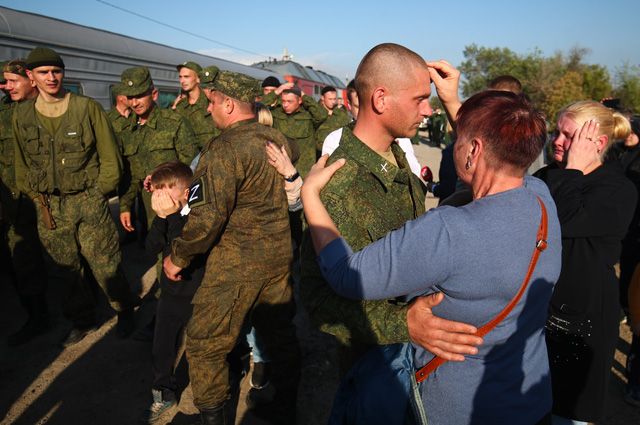 Russian President Vladimir Putin during a meeting with permanent members of the Security Council of the Russian Federation said that the Russians received numerous questions on partial mobilization. According to him, it is important to correct all mistakes and prevent their recurrence.

The President asked Russian Prosecutor General Igor Krasnov to immediately respond to reports of violations during partial mobilization: “In my opinion On instructions, the draft commissions, which are headed by the heads of the regions, also include prosecutors of the corresponding levels. I ask the Attorney General to respond promptly to every signal.

Previously, “excesses” in the course of partial mobilization, the heads of the regions also had to admit. It is they who are responsible for meeting the standards for the number of those called up. During the first week, more than a thousand of those who were mistakenly drafted into the ranks of the Armed Forces returned home.

Head of the service for mobilization work and territorial defense of the republic Viktor Fesenkoreported on the air of the Krym 24 TV channel that at least 400 people were erroneously called up in Crimea. At the moment, they have all returned home. Basically, these are those who did not fit in age.

Earlier, the head of the Crimea Sergey Aksenov was the first of the governors to report that mobilization measures had been completed in the region, since the norm for calling up reservists was fully implemented.

Wrongly mobilized 39-year-old resident of Izberbash Idris Chopanov was returned home in Dagestanwho single-handedly cares for his father — disabled of the 1st group. “They just handed him a summons, told him to come for an interview and they took him away,” — told the relatives of the mobilized.

Before that the head of the region Sergey Melikovacknowledged that other mistakes had been made by the local authorities. Melikov gave a real dressing down to the military commissar of Derbent after a scandalous video about “oral subpoenas” got on the Web through the loudspeaker. Employees of one of the military enlistment offices traveled around the city and with the help of a megaphone ordered absolutely all males to appear at the military registration and enlistment offices.

“Tell me, what kind of idiots are these? “All male citizens to report to the military commissariat of the city of Derbent”. What are you, morons? This is nothing but the dissemination of fake information, for which an article of the Criminal Code is also provided today! — Melikov was indignant, throwing his phone on the table in anger.

Belgorod reacted at the weekend

One of the first regions to report the return of those mobilized by mistake was the border Belgorod region. The fact that 75 local residents were released from service there became known as early as Sunday, September 25.

« representatives of professions important for the economy and the region”, — explained Governor Vyacheslav Gladkovin your telegram channel. To date, more than 100 such cases have been identified.

The government of the Altai Territory reported that 59 servicemen called up for mobilization returned home. The reason is the same — they did not meet the selection criteria that were announced by the Ministry of Defense

Chief military commissar of the region Marat Usmanovnoted that mistakes often occur through the fault of the conscripts themselves. Citizens may receive a summons due to the fact that they did not notify the military commissariat in time about changes in their marital status or place of work.

Governor of the Omsk Region Alexander Burkov drew attention to the fact that due to errors during mobilization, even those who were not fit for service due to health reasons got into the ranks. “Unforgivable mistakes are made during mobilization. Summons are received by men with cancer, fathers of many children and students, — noted the governor.

In the Tula region, five full-time students were returned home, who had previously been erroneously called up as part of partial mobilization. This was reported on the website of the government of the region.

Young people were called up even before the signing of the presidential decree on a deferment for students.

Seven people were returned to the Krasnodar Territory

The head of the region, Veniamin Kondratyev, said on Telegram that seven mobilized residents were returned home. All of them were called into service by mistake.

The loudest case was the call of 59-year-old Viktor Tarapun from the village of Kanevskaya. A man who has several diseases, including chronic heart failure, never served in the army, was mobilized the day after the presidential decree.

A headquarters was opened in Yakutia to work on mistakes

More than 120 people who were mobilized by mistake will return to Yakutia. Head of the Republic Aisen Nikolaev wrote about this in his telegram channel. 51 of them took a return flight from Vladivostok on September 26.

Among the others was a resident of the city of Neryungri, who was mobilized despite a severe skull injury. He was sent for combat training, despite the fact that the man recently underwent a complex operation. Until the end of the NMD, a special headquarters will work in the region, which should identify errors during mobilization.

The authorities of the Kostroma, Tyumen regions and Primorsky Territory also announced the return of several dozen local residents.

« ‘We’re done’: A new generation of Iranians are using this app to track the country’s morality police (Previous Post)
(Next Post) “We don’t leave our own” sample 1877. How was the first mobilization in Russia »