The visit of the President of Indonesia, who otherwise had little chance of attracting any noticeable attention, has become a real sensation. Firstly, Joko Widodo turned out to be the first leader from far abroad to visit Moscow after the start of a special operation in Ukraine. Secondly, he brought the first message from Vladimir Zelensky to the Kremlin after unsuccessful negotiations. And finally, thirdly, Widodo, at the request of Western politicians, had to clarify a question that is by no means an idle one for many: is Putin still going to personally come to the G20 summit in Indonesia or not? 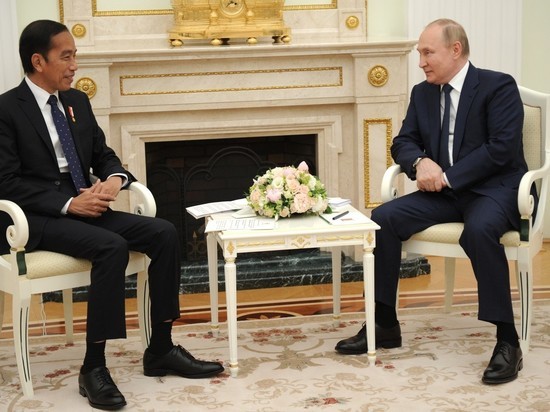 This topic was vigorously discussed at the recent G7 summit. But the participants in the discussion did not come to a consensus. And the representatives of the Russian side did not begin to help the “collective West”, letting in a diplomatic fog. One said that Moscow proceeds from the fact that the event will be held in person. And it was with this calculation that the invitation of the Indonesians was accepted. Another noted that “the decision will be made in a timely manner.”

Recall that in 2014, after the annexation of Crimea and the first salvo of sanctions, the Kremlin was already facing a similar dilemma. And then it was decided not to abandon the trip. Moreover, there was no compromise in the form of a remote format in the pre-pandemic era. The G20 summit took place in Brisbane, Australia. Putin felt uncomfortable there, he hardly talked to anyone and went to the airport before everyone else, explaining his early departure by a long road and the need to sleep at least a few hours before going to work. In general, psychologically, the moment was clearly difficult. And whether Putin wants a repeat is really a big question. However, Widodo's visit did not bring clarity to it. The President did not publicly say anything about his plans for the G20. He only welcomed the Indonesian presidency. And he expressed the hope that Russia would be able to take part in the preparation of the leadership meeting. Theoretically, the president at the summit in Bali can be replaced by Foreign Minister Sergei Lavrov, Russian Sherpa in the G20 Svetlana Lukash, and in some events, such as a business breakfast, Finance Minister Anton Siluanov or Economic Development Minister Maxim Reshetnikov.

Joko Widodo heard a little more specifics on another important topic – the supply of Russian food and fertilizers to the world market. The Indonesian president noted that the G7 leaders he met earlier in the week denied the restrictions: “Russian food and Russian fertilizers are not subject to sanctions,” he was told. Vladimir Putin, responding to these words, confirmed that, formally, Russian suppliers of fertilizers and food, indeed, were not subject to sanctions. “But the owners of our companies that produce fertilizers, and even their family members, were put under sanctions … this makes it difficult to conclude contracts, complicate financial transactions,” he explained. According to Putin, supplies are also affected by restrictions on ship insurance from the Russian Federation. “That is, they did not formally impose sanctions on some products, but created such conditions that it became much more difficult to supply them to foreign markets,” the president added. At the same time, Putin stressed that Russia remains true to its obligations. And it will find an opportunity to meet the demand of farmers from Indonesia and “other friendly countries” for fertilizers. In general, Russia's share in the world market for these products is 11%, and for some items it reaches 20%. “Last year, 37 million tons of fertilizers were delivered,” Putin said. As for grain exports, Russia expects to increase supplies from last year's 43 million tons to 50 million.

Against this background, as the Kremlin has hinted more than once, the problem of Ukrainian grain looks greatly exaggerated. According to Putin, there are now 5 million tons of grain on the territory of Ukraine – an amount that “does not affect world markets in any way.” In general, the share of Ukrainian grain exports is 0.5% of all food produced in the world. The President explained to Widodo that it was Kyiv that “mined the approaches to its ports, and no one is preventing them from clearing mines and withdrawing ships with grain from there.” “We guarantee security,” he said. Putin also said that Russia offered Ukraine to export grain through Belarus, but this offer was rejected. However, there are other alternative routes – “through Romania, the Danube, the subsequent movement along the Black Sea, through Poland, Belarus, through the ports of the Sea of ​​Azov,” he listed. Putin called Western countries the main culprits of the global food crisis, which during the pandemic were engaged in uncontrolled emission and accumulation of unsecured debts, which led to an imbalance in the markets. Joko Widodo singled out the main thing from these explanations. “Vladimir Putin said he would guarantee supplies,” he said after the talks.

The Indonesian President also noted that peace issues are a priority for his country, so he decided to visit Moscow and Kyiv to try to move the warring parties to “settle the conflict” and “open dialogue.” “I conveyed Zelensky’s message to President Putin and expressed my readiness to establish communication between the two leaders,” Widodo said. Dmitry Peskov told reporters that he did not know what Zelensky was proposing – the letter had not yet been studied. Earlier, the Kremlin said that Kyiv could stop the special operation at any moment: this requires an order from the Armed Forces of Ukraine to lay down their arms and an agreement to fulfill the conditions put forward by Russia during the spring negotiations.