In winter, light in the northern latitudes is dim and very blue compared to summer light. Reindeer eyes have evolved to be better suited at seeing in this unique environment.

Reindeer have adapted to the dim, blue light of the Arctic winter.

Reindeer noses may not glow red, but these creatures of cold climes have evolved the ability to change the color of their eyes to help them thrive in dark, northern winters.

For an episode of The Conversation Weekly podcast, Glen Jeffery, a professor of neuroscience at the Institute of Opthamology at UCL (University College London) in the UK, spoke about what makes reindeer eyes truly unique in the animal kingdom. He shared his findings with The World.

Most people have seen the gold, glowing eyes of a cat, a raccoon or some other nocturnal animal staring back at them during a nighttime drive. The part of the eye that produces that golden reflection, as Jeffery explained, “is a mirror that lots of animals have called the tapetum lucidum.” A taptetum helps animals see better in the dark by bouncing light from the back of the eye through the retina a second time. In most mammals, the tapetum is a “standard golden,” as Jeffery described the color, and that color doesn’t change. 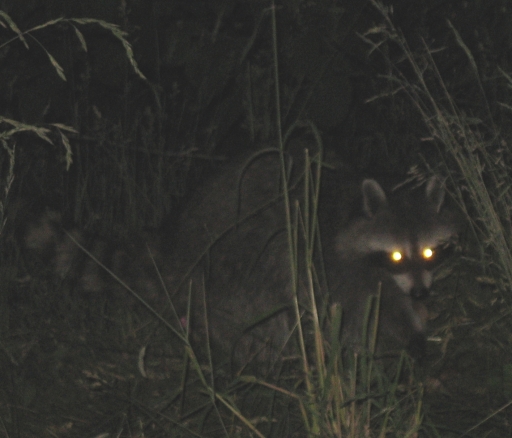 Many animals’ eyes shine in the darkness because of a reflective layer called the tapetum lucidum that is usually gold.

One day, Jeffery received a box in the mail out of the blue. It contained two jars filled with reindeer eyes from a slaughterhouse in Norway. One jar was labeled summer and one was labeled winter.

“I opened up the summer ones first and I thought, ‘I’m wasting my time here,’” Jeffery said. He saw golden eyes, just what he expected.

“But then we opened up the other eyes, and that was when there was a shock, because the winter eyes were blue,” he said. “I’d never seen anything like that in my life.”

Jeffery and his colleagues spent years studying the biology of reindeer eyes and the environment they are made for — the dim, blue-hued months of the Arctic winter. What they discovered is a marvelous bit of evolution that has given reindeer some of the most interesting eyes on Earth.

This article is republished from The Conversation, a global nonprofit news organization dedicated to spreading the knowledge of academic experts, under a Creative Commons license.

« Ireland’s Mary Robinson says being an ‘Elder’ is about teaching the next generation, but also listening to them (Previous Post)
(Next Post) Residents of informal settlements among the most at risk from climate change  »