System of values. Films of the project “Film Lessons in Schools” were shown in Tver 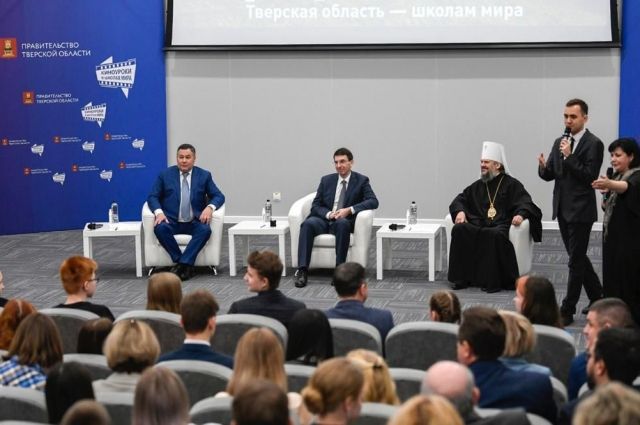 On April 27 multimedia park Russia — my story" The premiere of two films shot for the All-Russian project “Film Lessons in Schools” took place in Tver. Together with the children they were discussed by Plenipotentiary Representative of the President of Russia in Central Federal District Igor Shchegolev and Governor of the Tver Region Igor Rudenya. This was reported by the press service of the regional government.

The Future of Russia

Schoolchildren from districts of the Tver region, as well as children from Lugansk and Donetsk People's Republics were able to see films called "Forever" and "House", created by the guys themselves. Also present at the premiere were Metropolitan of Tver and Kashinsky Ambrose, educators and other guests.

"The project contributes not only to education, but and transmits the image of Russia — how we want to see it in the future. It should consist of those people whom we see on screens — kind, sympathetic, courageous, hardworking, loving their country”, —emphasized the plenipotentiary of the President of Russia in the Central Federal District Igor Shchegolev.

It is interesting that feature films are made on the money that schools receive from waste paper collection on action «Cinema ecology». For example, the film “Home” cost schoolchildren from  Tver region one million rubles, which they earned on their own.

The picture tells about a boy from an orphanage who managed to reveal his talent. And he was helped in this by his friends, adults who are not indifferent to his fate, and constant, purposeful work. The children from Vyshny Volochek, Tver and Mednovskaya sanatorium boarding school, as well asprofessional actors Olga Budina and Oleg Dulenin.

«We have very talented children, youth. This is a very serious work, both by meaning, and by performance», — Igor Rudenya, Governor of the Tver Region, shared his impressions of the film.

Second premiere — movie “Forever” — tells about the feat of children in Adzhimushkay quarries, the fight against fascism, the relation of children and teenagers to history.

“Often important words that a peer says to a peer are stronger than the the same thing, but said by adults, — said Metropolitan of Tver and Ambrose of Kashino.

Make your own film festival

At the  discussion of the films, which took place immediately after the screening, Igor Rudenya noted: «The most important — it is a system of moral values. But this can only be shown by a personal example. It is impossible to buy, donate, transfer to & nbsp; use. This can only be brought up and then passed on from generation to».

The head of the region supported the initiative of schoolchildren to hold a film festival of the Central Federal District in the Tver region. It is expected to take place twice a   — spring and autumn. The opportunity to shoot another film in the Upper Volga region under the"Film lessons in schools of Russia" project is also being considered.

" real human qualities. This will ensure that Russia will be the most powerful country in the world. The rising generation — our most powerful potential», — said the author of the project “Film Lessons in & nbsp; Russian Schools” Viktor Merkulov.

Now there are already 41 movies in the collection of the All-Russian Festival. 78 regions of the country have joined participation in the project.

« Where are the Russians going to spend the May holidays? (Previous Post)
(Next Post) Deputy Maria Butina called the exchange of Yaroshenko for Reed successful »