The country of prosperous elections: how one becomes the president of Costa Rica

It would seem – where are we, and where is Costa Rica? But in this distant Central American country, there is much that we should pay attention to and even learn from. On April 3, 2022, the second round of the presidential elections took place here. Initially, 15 applicants participated in the competition. Analysts assumed that the veteran of the electoral battles, the former head of state, Jose Maria Figueres Ferrer, would win. But the election was won by the candidate of the Social Democratic Progressive Party, finance minister in the previous cabinet, Rodrigo Chavez. He managed to turn the tide and succeeded, getting 52.9% of the vote. His competitor, having learned about the defeat, promised all kinds of assistance to the victor. 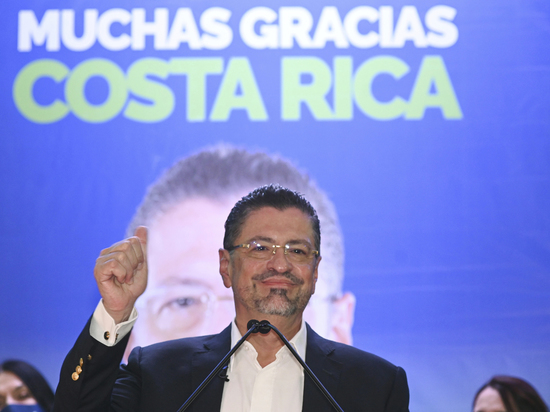 Costa Rica has no appreciable natural resources. Its wealth was made up of workers who created a prosperous country. For a long time it was distinguished by stability and harmony of political and social development, and was a model for the countries of the continent. It was a kind of oasis of democracy and social harmony against the backdrop of dictatorial regimes, civil strife and armed conflicts in other states.

After a short civil war and the adoption of the 1949 Constitution, the country developed along the path of a pluralistic democracy. From the beginning of the 1950s until the end of the 1970s, the National Liberation Party (PNP) of the social democratic persuasion dominated the scene. This made it possible to implement the project of a socially oriented market economy. In the course of the transformation of society, the growth and strengthening of the middle class, social-Christian groups began to be created. The coalition formed by them in 1978 won the presidential elections, undermining the monopoly of the PNO. Then the Party of Social Christian Unity (PSHE) is created. Both parties, replacing each other in power, pursued a roughly similar course that ensured sustainable growth and a relatively high standard of living. Costa Rica does not have an army and is spared the need to spend money on defense and maintenance of the armed forces. This made it possible to finance education, health care and housing construction.

The foundations of a socially oriented state were laid by the adoption of the Labor Code. It established the minimum wage, standardized working hours, weekly rest, holidays, pensions, guaranteed the right to social insurance. Unemployment was reduced to a minimum, the strike struggle was not particularly acute.

The secret of the strength of democratic institutions and traditions lay in the interaction of a number of factors. Here the principle of separation of powers was put into practice. Each branch strictly performs the functions assigned to it. The conflicts between them are not so significant. The ruling elite is distinguished by a sense of responsibility for the fate of the country.

A well-structured and highly effective civil society has developed. Suffice it to point out that in 2000 the number of non-governmental organizations was 16,907. Uniform “rules of the game” have been established for both the government and society. A system has developed where the power in the person of the state is at the service of society, there is a compact and efficient state apparatus.

As you know, one of the most important institutions of democracy is the independent mass media. They have long enjoyed unlimited freedom. The media actually play the role of the “fourth” power, constantly monitoring the activities of other branches.

During the second half of the 20th century, the international prestige of Costa Rica has increased significantly. For his great contribution to the settlement of the Central American conflict, its President Oscar Arias was awarded the Nobel Peace Prize in 1987.

Toward the close of the 20th century, the country made a significant breakthrough in development. She turned to the open market, carried out structural reforms, privatized a number of important sectors of the economy. I was able to find my own niche in the field of high technologies. Costa Rica is no longer just a supplier of coffee and bananas. The country has launched the production of computer programs, there are about 150 software manufacturers operating here. Pentium and Pentium Pro processors, manufactured under the trademark of Intel Corporation, are exported to dozens of countries in the Western Hemisphere, to Great Britain, Spain, Italy, France, Poland, Japan, and Vietnam. The share of such products in exports reached almost 50%.

However, the rapid pace of change has not always been matched by adequate social protection measures. The poverty rate was 14%, every second person is employed in the informal sector, corruption has reached 10%. This was combined with the pandemic and the flow of migrants from Nicaragua, seeking shelter and livelihood from their neighbors.

As the dynamics showed, even in relatively prosperous countries, serious problems arise when the ruling circles stop monitoring the situation, do not resort to preventive measures and steps that can prevent an imbalance in the situation. After all, not all strata of society are equally adaptable to changes, it is much more difficult for people of traditional professions, they are hard to endure the consequences of economic modernization.

Let's get back to the elections. The voter always regularly came to the ballot boxes. This procedure was limited to one round with a predictable result. But this time for the election of the head of state for the first time had to resort to the second round. Taking into account the extraordinary nature of the situation and in an effort to avoid criticism, the Supreme Electoral Tribunal organized a manual recount in order to ensure absolute transparency of the electoral process.

The intrigue of the elections was that the presidential chair, among other contenders, was contested by two former like-minded people. One of them is Oscar Arias, who intended to return to power after a 14-year break and got this opportunity thanks to the verdict of the Constitutional Chamber of the Supreme Court. At the center of the debate were issues of raising the living standards of the population, education and attitudes towards the creation of a free trade zone with the United States.

In the end, the citizens handed over the fate of the country to the 60-year-old ambitious and energetic economist Rodrigo Chavez, who has a solid track record in the prestigious World Bank. “For me, this is not a trophy or a medal, but a huge responsibility,” said the winner. And there is hope that the victor will straighten out the distortions that have arisen in recent times and once again turn Costa Rica into the flagship of democracy in the region.

[Verse 1]
Money fly you out when you in Georgia (in Georgia)
I make sure shorty feel important (feel important)
Balmains while she’s going shopping
Marilyn keeps her on auto pilot (auto, auto, auto)
Catch me with thugs
Ride around with them birds
Drugs make her slow
Can’t feel her toes
Gang shit on Tour
Ohh she love me (hey)
All my diamonds drownin’ (hey)
Bitch touch Molly (oh)
Girl what you planning (oh, oh)
I feel like Aladin (yeah)
I just found my Jasmine (my Jasmine)
Ohh she crazy
I love her crazy

[Verse 2]
Gyal dem go shopping
Yorkdale with squaddy (okay)
Saks fifth better spend a bag if you walk in
Ass look melodic, in Toronto with exotic
Like these bitches are from Europe
My girl look like Katie Couric
She got tattoos on her arm
She sings like Adele (okay)
Narcotics for fun (ooh)
Liquors for the pain (yeah)
Don’t believe in love (no, no)
Marriage ain’t her thing (yeah, yeah, yeah)
Face, out my face bitch
Am I looking out your way now
Cyatties out the base
But I’m looking for my main girl (main)
I could barely think
I have way too much to say now
Can we take a trip
And fly out to Costa Rica
They wanna be us

[Verse 1]
Money fly you out when you in Georgia
I make sure shorty feel important
Balmains while she’s going shopping
Marylyn keeps her on auto pilot (auto, auto, auto)
Catch me with thugs
Ride around with them birds
Drugs make her slow
Can’t feel her toes
Gang shit on Tour
Ohh she love me (hey)
All my diamonds dreaded (hey)
Bitch touch Molly (oh)
Girl what you planning (oh oh)
I feel like Aladin(yeah)
I just found my Jasmine(my Jasmine)
Ohh she crazy
I love her crazy

[Verse 2]
Gyal dem go shopping
Tagged up with squaddy
Saks fifth better spend a bag if you walk in
Ass too melodic in Toronto with exotic
Like these bitches are from Europe
My girl look like Katy Cherry
She got tattoos in her arm
She sings like Adele
Narcotics for fun
Liquors for the pain
Don’t believe in love
[?]
Face, out my face bitch
Am I looking out your way now
[?]
But I’m looking for my main girl
I could barely think
I have way too much to say now
[?]
And fly out to Costa Rica
[?]

Well my seasons roll by high and low
I don’t hold the reigns I ain´t got control
And I wish my dice had a different roll
And I wish my path weren’t a ragged road
Yeah.

I wanna leave this place yeah to never be found
I wanna leave my old life far behind
Can I lose my name, be someone new
And I’ll throw my trouble deep in the wild blue