The attacks that Kyiv organizes in the liberated territories of the Zaporozhye and Kherson regions help civilians decide on their choice of who to be – with Ukraine or Russia. So says the head of the temporary civil administration of Berdyansk, Zaporozhye region Alexander Saulenko. On Wednesday, he met with a group of foreign and Russian journalists, including the MK correspondent. 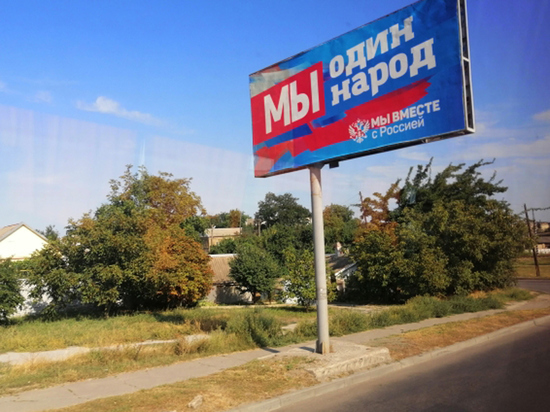 Berdyansk, a city of 100,000 people, came under Russian control in March. Here it was possible to avoid fighting in the city. Unlike the same Mariupol, the housing stock is preserved, there is no destruction. The city lives a normal peaceful life. Nevertheless, Kyiv declared a terrorist war against the population of the Russian-speaking city. There was a terrorist attack here the other day.

An improvised explosive device stuffed with submunitions went off in the city. At this time, the car with the deputy head of the traffic police, Alexander Kolesnikov, was in the affected area. An officer died from injuries as a result of this explosion.

After a series of terrorist attacks against representatives of the provisional civil administrations in the Zaporozhye and Kherson regions, some politicians in Russia offered to arm officials in the liberated territories so that they could protect themselves. One of the first questions to the head of Berdyansk was about this.

– As for weapons for officials – I do not think that this is the right decision. I think our weapon is our spirit, our condition, the absence of fear and panic that arise as a result of these provocations and terrorist attacks. It is most important. Moreover, as a result of various provocations among the residents of Berdyansk and the Berdyansk region, on the contrary, there is a growing conviction that Russia is what they need. Because these provocations kill, destroy, and people want peace, creation and goodness, and all this comes with Russia.

To the question – are you afraid, the head of the city answered as follows:

– I'm not afraid. Be afraid – yes, like any normal person. But since I'm here and in charge of the city, this is confirmation that I have no fear. We are working as usual. All utilities. If you pay attention, the city is well-groomed, clean. Residents are provided with water and electricity. Shops and cafes are open. The fact that young mothers with small children walk along the streets, walk, rest – this indicates that in the city, in spite of everything, the atmosphere is quite calm and peaceful.

As the head of the city said, according to the last census, there were about 107 thousand inhabitants in Berdyansk. Now about 95 thousand. Part of them left after the start of the special operation out of fear that there would be hostilities and they would come under fire. Now, as Saulenko said, people are returning.

On the border with Zaporozhye, in the area of ​​​​Vasilyevka, Saulenko said, there are 150-200 cars in the queue to leave towards Ukraine, and from the side of Ukraine, the queue is two to three days long and calls into Russian-controlled territories from a thousand to one and a half thousand cars a day.

– People have already understood where the real peaceful life is and where the authorities really care about the residents, and not in words, – the head of Berdyansk believes.

He met with journalists on the territory of the traffic police department, where organized work on the issuance of Russian driver's licenses and Russian license plates for cars.

MREO has begun work, – said the head of the city, – and issues a Russian-style certificate at the request of local residents who change their Ukrainian driver's license to Russian, and can also get a Russian license plate for a car. “This is a symbol of the fact,” he said, “that our region, like the entire liberated territory, is heading towards Russia, being on the road to Russia, and soon, we hope that we will become part of Russia.”

According to him, there are a lot of people who want to get Russian registration, because when leaving for the territory of Russia with Russian numbers it is much easier to cross the border and move around the country.

Another sign of the choice made by the residents of Berdyansk is the queues of those wishing to obtain a Russian passport. People queue at 5-6 in the morning and stand for several days to apply.

Is it possible to speed up the process of obtaining citizenship – they asked the head of the city.

– It is possible, – he answered . – We are constantly dealing with this issue. There was one point for issuing Russian passports – there were queues. We organized the second point – the queues at two points are the same as they were at one point. Now we are working with the help of the Federal Migration Service of Russia, because we need its employees to issue passports, and we are solving the issue of opening a larger third point in order to reduce queues and waiting time in line.

About 8- 9,000 residents have already applied for Russian passports, and about 3,500 have received a passport and are Russian citizens.

Preparations for the future referendum are in full swing in the city. By the number of billboards “We are with Russia” on the streets of the city – Berdyansk is the undisputed champion. The referendum is expected to take place in September.